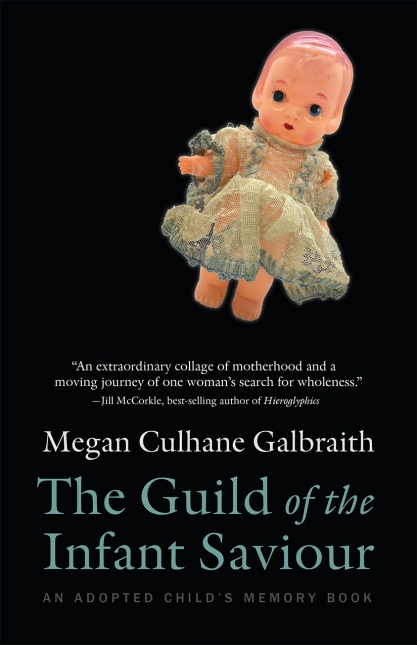 To be an adoptee is to be a hybrid grafted onto a new family tree, an experiment in social engineering. To fully express the composite nature of the adoptee experience, Megan Culhane Galbraith has created an achingly beautiful hybrid memoir, The Guild of the Infant Saviour, blending the visual with the literary to convey the complexities of the adopted person’s search for identity and belonging.

With brutal candor, the author explores every nook and cranny of her adoption while interrogating prevailing cultural attitudes toward family, motherhood, femaleness, and sex, bookending each essay with original photos selected from her “adopted child’s memory book” and recreations of those photos using antique plastic dolls and other found objects.

The original photos are reproduced in small scale, tiny and mysterious cartouches that appear like full stops at the end of the essays, while the reconstructions are vivid, full-page plates. By re-staging childhood photos, Galbraith makes herself the subject, rather than the object, of her own story:

“I realized I’d also been an object: a doll. Behind the lens of my camera, I am the director of my own narrative. I’ve reclaimed a sense of control.”

And what a subject Galbraith is. Her willingness to lay her life bare, detailing and dissecting her trauma and the long, hard road to healing, makes for an absorbing and dramatic read. But her inquiry ventures far beyond her own microcosmic example to examine popular notions of family and child-rearing, the eternal question of nature vs. nurture, memory as an unreliable narrator, the power of shame, intergenerational trauma, and other issues fundamental to the human experience.

Through her adoption agency, Catholic Charities, Galbraith discovers tantalizing information about her first mother, discerning eerie parallels between their lives. “It is incredible how few concrete details I needed to feel connected across time.” She also notes that her birth mother had recently updated her medical files with Catholic Charities. “She’d left a Hansel and Gretel-like trail of breadcrumbs through the woods, as if willing me to find her. So I did.”

The author reunites with Ursula, her biological mother, in New York City, the city of her birth. “Ursula and I smoked cigarettes, drank red wine, and traded stories like we were old friends.” They visit the Midtown Manhattan site of the home where Ursula waited out her pregnancy, the Guild of the Infant Saviour, since converted into a Hungarian consulate.

Galbraith learns about the circumstances of her birth, her mother’s family, her Hungarian ancestry, and other heretofore hidden details of her origins. She is shocked to discover that Ursula grew up only a few miles away from her own Connecticut hometown, and that her adoptive and biological grandparents may very well have known each other.

The more she learns, the more she wants to know, but when pressed for information, Ursula becomes cagey. First, she drops tantalizing clues about Galbraith’s biological father, but later contends he “pretty much could have been anyone, it was the late ‘60s.” Her stories begin to contradict one another, and when asked for clarification, she lashes out, declaring the author “cut off” from her memories.

In exchange for permission to use some of Ursula’s photos in the memoir, Ursula demands to be allowed “to read, revise, and make changes to my entire manuscript.” Galbraith uses photos of a picture frame stuffed with cotton batting instead.

Meanwhile, Galbraith’s adoptive mother is diagnosed with pancreatic cancer. Tending to her during her final days, Galbraith is confronted again with the strains in their relationship. And yet, when she loses her mother, she feels “a bottomless grief that resurfaces even now, decades after her death.” Despite their differences, she understands that her adoptive mother loved her fiercely and dearly — more fiercely and dearly, in fact, than her biological mother does.

The longest essay of the collection, “Hold Me Like a Baby,” explores the use of live babies in Cornell University’s Domecon (domestic economics) program. “Plucked from local orphanages, asylums, and alms-houses, hundreds of these babies were chosen to help college coeds ‘apprentice for motherhood.’”

After being used as live experiments for the program, they were then “highly sought-after” for adoption. Weaving together her research on Domecon and 20th-century attitudes toward children and child-raising, reflections on being an adoptee, and original and reproduced Domecon photos stitched together with needle and thread, Galbraith forges a multimedia treatise on the social history of mothering in the modern age.

Many of the essays in the collection were published elsewhere, making for a fractured lens, which is entirely fitting for an adoption memoir. Piece by piece, Galbraith assembles her story, fitting it together into a gorgeous mosaic that offers a bold, new interpretation of a story as old as humanity itself.

Alice Stephens is the author of the novel, Famous Adopted People, editor of Bloom, a book reviewer, and a columnist for the Independent.

Game of Queens: The Women Who Made Sixteenth-Century Europe