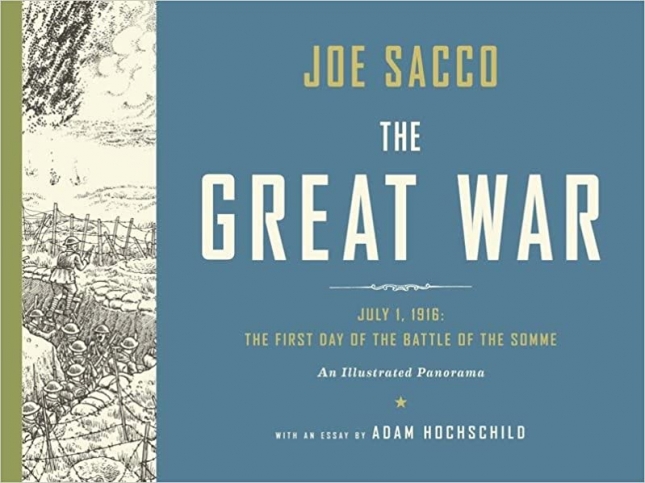 Actually, it’s more of a book than are the T-shirts and coffee mugs and children’s toys that your local book retailer stocks more prominently than any written material, but this volume is really an experiment.

Sacco, an artist, has said he was trying to create a modern version of the Bayeux Tapestry, which chronicled William of Normandy’s conquest of Britain in 1066 (and all that). Sacco’s work consists of a detailed, 24-panel drawing that attempts to capture in black and white the first day of the Battle of the Somme, one of numerous hideous feasts of bloodletting that marked the First World War.

The panels progress, from left to right, from the day before British troops began their “big push” — one of many doomed Big Pushes on the Western Front — through the battle’s first day. Sacco starts with the British commander, Sir Douglas Haig, taking a four-minute constitutional around his headquarters and concludes at a soldiers’ cemetery.

Adam Hochschild, author of several splendid books including a recent study of the Great War, contributed a short pamphlet that provides the grim data: On that single day, July 1, 1916, 57,000 British troops were killed or wounded at the Somme, “or two casualties for every yard of the front.”  He points out some of the lunacy of the effort, including the delusion that a massive artillery bombardment would annihilate the Germans before the British left their trenches (nope) and the order that the British attackers advance at walking pace, ensuring they were targeted more fatally by German machine gunners. 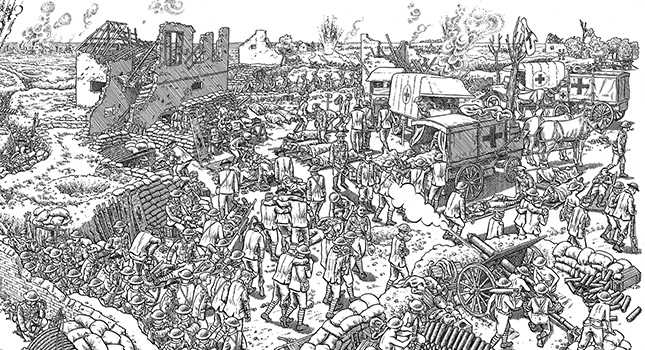 But this volume is really Sacco’s show. The result is interesting. I use the term “interesting” in the same way that my wife uses it when she reads something I’ve written. As in, not as good as I’d hoped.

Parts of it are powerful. There are so many horses — horses! — that you have to remind yourself that the internal combustion engine had not taken over the world yet in 1916. The images of giant cannons dragged by horses underscore how our technology of inflicting death outstripped our technology of protecting life, and still does.

Then there’s the Indian cavalry unit clip-clopping by in turbans. What are they doing there? And can’t someone get them some helmets? It’s both a ludicrous sight on the Flemish lowlands and an effective reminder of the colonialism of the contending parties (10 percent of the French soldiers were Africans).

For my money, the most effective images are the night-before views of the British trenches zigzagging crazily across the landscape, jammed full of men waiting patiently to be killed or mutilated. Somehow the outward calm and orderliness of the scene perfectly capture the collective insanity of the undertaking.

The battlefield scenes, though, lack power. Perhaps we are jaded by the graphic experiences that characterize movies, but Sacco’s distant perspective breeds the same detachment from the slaughter that the British generals had. Views of the medical stations for treating the wounded are, well, bloodless. I found myself marveling at the organizational achievements of the war-making machine and largely uninvolved with the individuals being chewed up by it.

War in the 20th century led artists to create intimate and upsetting works reflecting its violence. Think of Picasso’s “Guernica” or John Singer Sargent’s “Gassed.” In literature, there was Erich Maria Remarque’s All Quiet on the Western Front. I haven’t read it for 40 years, but I still remember that, for close combat, the German soldier’s spade was a more reliable weapon than knife or gun.

Sacco’s The Great War is an honorable attempt to make us experience the horror of the war, but his visual vocabulary omits the human element even while depicting thousands of human figures. Will it last nine centuries, like the Bayeux Tapestry? That’s setting the bar high.

One of the publishing industry’s more innocuous addictions is to anniversaries of Big Events. Those involving the distant past do not often capture the public’s heart. The Civil War’s sesquicentennial is limping quietly to the door, supporting the War of 1812’s bicentennial (so far noticed only in upstate New York and Maryland). With the centennial of World War I less than a year off, a great many more books on this under-studied catastrophe should be coming. There’s still room on the shelf for some excellent ones.

David O. Stewart is the author of The Lincoln Deception, a historical novel about the secrets of the John Wilkes Booth conspiracy, and three historical narratives, The Summer of 1787, Impeached, and American Emperor. Stewart’s study of James Madison and his partnerships will be released in the second half of 2014.