A chronicle of the famed writer’s 11-month lecture tour across the continent in 1882. 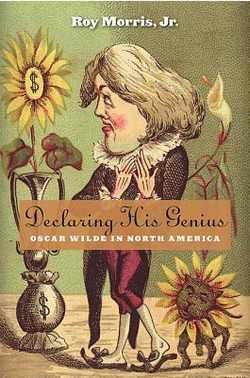 On December 6, 1958, the TV Western "Have Gun Will Travel" aired an episode allusively titled “The Ballad of Oscar Wilde.” Its neat premise, worthy of Wilde’s plays, unfolds with the economy of golden age TV: Oscar Wilde visits San Francisco; he employs the urbane gunfighter and series protagonist, Paladin, to protect him; unsuccessful candidates for the position kidnap Wilde and hold him for ransom; Paladin rescues him. As a child in a literate household, I vaguely knew who Oscar Wilde was; what he was doing in the Wild West simply baffled me.

Wilde, as I would learn, had visited not only San Francisco, but also many mining and cow towns, while on an eleven-month lecture tour in 1882, a tour that covered 15,000 miles and “140 cities and towns from Maine to California, from Canada to Texas.” The tour was prompted by the Gilbert and Sullivan parody of the Aesthetic Movement, "Patience," which had preceded Wilde to North America. Resplendent in “satin knee breeches, black silk stockings, crushed-velvet coat, frilly lace collar, pale-green cravat, and patent leather dancing slippers with silver bows on top,” Wilde lectured, variously, on the English Renaissance, the decorative arts, the house beautiful, and exterior and interior house decoration.

Wilde’s tour bristles with possibilities for literary treatment, whether fast paced narrative, sharply etched portrait, or academic exercise in cultural studies. Wilde, for example, falls within a distinguished line of English and expatriate American authors who made similar visits of discovery — Charles Dickens and Rupert Brooke, Henry James and Gertrude Stein — and who later wrote or lectured on their experiences.

Wilde also belongs to the more louche history of actors and musicians, vaudevillians and vagabonds, revivalists and charlatans who traversed both urban and frontier America in the post-Civil War years. Wilde’s friends Sarah Bernhardt and Lilly Langtry, for example, toured immediately before and after him (recall Walter Brennan’s obsession with the Jersey Lily in William Wyler's classic Gary Cooper vehicle, "The Westerner" [1940]).

Roy Morris Jr.’s Declaring His Genius: Oscar Wilde in America takes a different tack. Morris steers between the necessarily cursory coverage of Wilde’s tour in Richard Ellmann’s Oscar Wilde (1987) and the exhaustive coverage of it in Lloyd Lewis and Henry Smith’s “doorstop of a book,” Oscar Wilde Discovers America (1936). He also makes ample use of Matthew Hofer and Gary Scharnhorst’s annotated collection, Oscar Wilde in America: The Interviews (2010). The result, however, is a book underdeveloped in story and overburdened with detail, a book that should have been fascinating to read, rather than difficult to finish.

Morris follows Wilde’s itinerary very closely. As a result, the narrative tends toward the formulaic: Wilde arrives in a city or town; he takes a hotel room, usually described; he is interviewed, always described; he goes to receptions, generally hosted by local literary or social elites; he lectures, often to mocking audiences; he receives press coverage, frequently dismissive. In addition, Morris’s prose tends toward the discursive: Wilde typically meets someone in the first sentence of a paragraph; the rest of the paragraph, and often a succeeding paragraph, offers anecdotes and details about that person.

Though often amusing and interesting, they spiral outward until, by the end of the discursion, they have no bearing on Wilde or his tour. The effect is one of reading a book with footnotes but without a text — a nice Borgesian conceit, but not a page turner.

Perhaps more important, Declaring His Genius lacks clear theme or point of view. Morris offers a sly premise with great potential: not the simpering aesthete that audiences expected and cartoons portrayed, Wilde was in fact a tall, robust, and wonderfully open young man who made unlikely friends across the country, particularly in the West, and who outdrank most of them. Moreover, Wilde was smart and his lectures were serious efforts to promote the theory and practice of the pre-Raphaelite, aesthetic, and arts and crafts movements. Morris doesn’t develop the premise, however, and passes up opportunities to explore codes of masculinity, protocols of celebrity, or even the contents of Wilde’s  lectures.

Morris is an accomplished author of six previous works and the editor of Military Heritage, and Harvard is a distinguished university press. Surprisingly, and regrettably,they have misfired with this book.

Charles Caramello is Associate Provost for Academic Affairs, Dean of the Graduate School, and Professor of English at the University of Maryland. His current book-in-progress is Riding Late: Essays on Horsemanship, Cavalry, and the Great War.

The Field of Blood