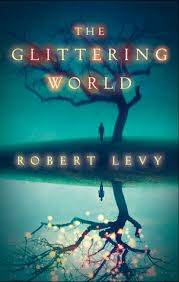 Gorgeously frightening, astonishingly creative, and ready to be a cult classic, Robert Levy’s debut novel, The Glittering World, creates a world so complete that it seems only too real. Or is that world the natural one and the world we know the distortion? Certainly on a psychological level, it is shockingly real. Four characters set out on what seems to be a simple and practical mission, but end up in a world of torment, discovery, and heightened awareness.

We meet Michael “Blue” Whitley, an aspiring New York chef, as he travels to Nova Scotia to sell his grandmother Flora’s home. Blue’s mother, who ripped him away from their Starling Cove community — a hippie artist/outcast commune — when he was 5, had asked him not to visit the place, but just to get the documents signed in Halifax. The money from the sale can help Blue pay off his mounting debts and perhaps enable his dream of being chef-owner of a successful restaurant.

Blue is drawn to seeing his almost forgotten birthplace, however, and what he finds is a shattering surprise not only to himself, but also his three traveling companions. It is life-changing and threatening, as it reveals his true identity.

Blue is accompanied by his longtime friend and spiritual intimate, Elisa, Elisa’s psychologist husband Jason, and Gabe, Blue’s much younger staffer and devotee. The novel is built in four major blocks and presented through the vantage points of these characters. This technique underscores the premise that our perception is our reality.

How much of what goes on in the woodlands near Starling Cove is accessible to the various characters? Only what each is prepared to see. How close is each to recognizing the Other Kind, the odd sentient life forms — seemingly as much vegetable as animal — that live beneath the land and water?

Blue discovers that one child was switched for another before his mother pulled him away from Starling Cove and his identity is a fraud. He seems to be a hybrid: a humanoid grafted upon something else. The “something else” Other Kind dimension is now making its claims.

Blue’s narrative comes first, and then he vanishes. The other three must pursue the mystery and its meaning. Doubters and believers collide, as they always have.

Information about the community is gleaned primarily through conversations involving three locals. Fred Cronin is an ironsmith who publishes the local newsletter; Maureen and Donald, a married couple, are the remaining elders of the destroyed artists’ colony. Interesting in their own right, they provide the deep background about — and explanations of— the current situation in the Starling Cove area. They are part of the community fabric and guard its mix of fact and lore.

Levy’s grasp of his art is impressive. One distinction is his ability to use speech patterns and vocabulary to help differentiate his characters. This aspect of characterization is often given lip service, but in too many novels — even those by accomplished writers — it is rarely employed with success. Here, perhaps, the author’s experience as a playwright serves him well.

Levy’s descriptions of place are masterful, too, including those that exist only in his imagination. The weight of Starling Cove’s cultural history is powerfully evoked. The world of sensation and mood flashes through the novel and informs each character’s sense of self.

Ultimately, it is the nature of the Other Kind that will haunt Levy’s readers.

The Glittering World shares “what if” space with many other novels: tales of alien invaders, time and space travelers, post-apocalypse remnants, and marooned or lost civilizations made up of survivors who have taken a different evolutionary journey. Levy’s Other Kind are not so much extra-terrestrials as ultra-terrestrials, beings closer to, and more biologically involved with, the earth and the forests than Homo sapiens.

They seem more part of the web of life than masters treading upon and exploiting their environment. What do they need us for? We are led to speculate.

I am reminded of lines from Gerard Manley Hopkins’ great poem, “God’s Grandeur”:

The Other Kind seem to inhabit and be inhabited by such “deep down things.” Their home is where the “vegetable love” of Andrew Marvell’s “To His Coy Mistress” might flourish.

Robert Levy’s work is going to receive a lot of attention. Called “a dark fairy tale,” it is much more than that. At once poetic, fulfilling, and upsetting, for this reader, The Glittering World demands a prize or two, and a sequel.

This powerful story about one boy’s loss reflects on what it means to be haunted.

As Good as Dead: A Novel