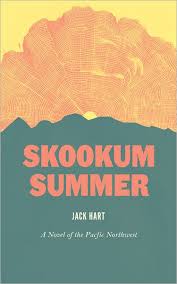 Skookum, a term of Chinook origin, has grown to mean “something of exceptional quality.” So when a disgraced newspaperman leaves a big city paper to write softball articles for a “podunk weekly,” but instead finds himself chasing a big-league murder mystery, one might characterize his luck as “skookum!”

Similarly, when the beer flows freely, the trout are plentiful, beautiful women swoon, and story after story seems to fall into this journalist’s lap, once again, you might say that fellow’s life is “pretty skookum.” And if you like your warm-weather fiction playful, with a protagonist you can root for, and if you might appreciate a little Pacific Northwest logging history along the way, then Jack Hart’s debut novel, Skookum Summer: A Novel of the Pacific Northwest, should prove a skookum read.

The action in Skookum Summer takes place in a fictional town on the inland aspect of the Olympic Peninsula in Washington State. The setting is the early 80s and the demise of logging threatens mills and livelihoods; even the local Thriftway is in jeopardy. The beginning of the story finds UW (“U-dub”) journalism grad Tom Dawson returning prematurely from a rookie stint at the Los Angeles Times. The narrative only hints at the mistakes Dawson made, and the writer returns to his hometown to lick his wounds. Then, like a bite on his first fly cast, Dawson immediately finds himself reeling in a huge story — investigating the death of a Bent Fir logging patriarch whose rig plummets over a ravine.

Thankfully, like the image on its cover, Skookum Summer is a work more like a fir slab than a uniformly sanded, polished board. One ring suggests this is a simple whodunit featuring (as the Bent Fir sheriff intones about a local ne’er-do-well): “Log rustling. Moonshining. Meth cooking. Petty theft. Stuff like that.” Read on this level, Skookum Summer is a book of light, campy fun. If Skookum Summer were made into a film, one could easily see Tom Dawson as an 80s-era Tom Cruise, a Top Gun or Days of Thunder smirk slowly wiped off his face in favor of a more mature, ethical, jaw-clinched seriousness where the protagonist (channeling the Rolling Stones here) doesn’t exactly get what he wants, but finds what he needs.

Another ring of this summer tale captures a time and place, with the murder, mayhem, mugs of Rainier beer fading to the background as Hart details the logging industry. Here talk of the men, machinery, and the processes of how timber gets from mountainside to mill slow the novel’s narrative pace. A word of caution is due. For while Skookum Summer is an excellent hammock read, Hart’s use of timber terminology and word pictures left me asking for a chance to run some searches on Wi-Fi, or at least a few 70s-era-newsprint black-and-whites. Without Google, one could simply gloss over these sections to avoid a mental snarl of brambles. With the Internet’s assistance, these Pacific Northwest passages take better shape and enhance the novel’s force and fun.

The final center ring of this slab is that knowledge of author Jack Hart’s history makes this novel read as a journalist’s fantasy, a skookum summer dream or Echo (the name of the newspaper in the book) of the past for long-time newspaperman contemplating a hometown love lost. Like the protagonist, Tom Dawson, Hart too came from University of Washington where he enjoyed success writing for the university paper. Also like Dawson, Hart has made a career of not merely reporting the facts, but of crafting stories that reach readers “guts” and transport them to different time and place.

As managing editor of the Oregonian and a writing coach, Hart has helped revolutionize narrative-nonfiction writing. In a way, with this novel, Hart has thus doubled back on himself, writing fiction inspired by his nonfiction, which in turn resembles fiction writing. The result is a summer read with a throbbing pulse, a Hart beat if you will, which pulses with intrigue and fun.

Craigan Usher is director of Child and Adolescent Psychiatry Education at Oregon Health and Science University. Invested in psychoanalytic theory, he is presently working on a course entitled “Letters (Un)Delivered: Poe, Kafka & Lacan.”