The First Thing About You

A teen confronts ableism — and seeks reinvention — at his new school. 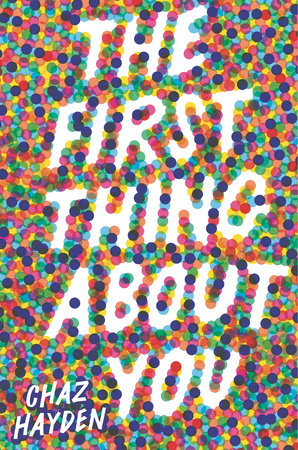 Moving from California to New Jersey is a great chance for 15-year-old Harris Jacobus to reinvent himself. After growing up surrounded by inaccessible beaches and being defined by his wheelchair, he’s ready for some more traditional high-school experiences. Having spinal muscular atrophy means he’ll never be able to do some things the way other people do, but it doesn’t mean he can’t use this move to try to become more popular, go to parties, and maybe find a girlfriend.

Unfortunately, using a wheelchair in a school that’s supposedly accessible is still hard. And working with the school on an individualized plan for his disability is met with resistance; a lot of people need to understand that “inclusivity was not making someone feel uncomfortable for the enrichment of others.”

Instead of finding a cool crowd, Harris finds himself sitting at the loser table with Zander, a freshman who turns to “Mean Girls” for wisdom since the film “provides all the answers to our adolescent questions. How do I determine the cliques? What will it take to become popular? When do I wear pink? You see, it’s not just a movie, but a guide for the weak and afraid. Not to mention a great resource for devastating comebacks.”

Then there’s Nory, the cute girl who refreshingly treats Harris like any other guy who blocks her locker or flirts badly. (In his defense, have you ever tried to flirt while your mom — saying she’s your executive assistant — accompanies you to school?)

Harris has a foolproof strategy for gauging whether he’ll get along with someone: Ask their favorite color. “I thought about colors a lot, actually,” he explains. “Especially when I was about to meet anyone new. It was always the first question I asked them. A person’s favorite color says a lot about who they are.”

A blue himself, Harris knows that greens and purples are too close on the color wheel to make good friends, while yellows like Zander can encourage a more outgoing nature. But Nory won’t tell Harris her favorite color, leaving him unsure if it’s worth pursuing her.

After struggling to find a nurse young enough to blend in around school (and that insurance will cover), Harris’ family hires Miranda, a nursing student as eager for the work experience as she is to help Harris on his mission of reinvention. She seems perfect. Her favorite colors are orange and red, and she even graduated from Harris’ new school.

With Miranda’s help, Harris figures out how to flirt with Nory, starts sitting with the popular kids, and even gets invited to his first party. But as she pushes him to try newer, riskier things, it becomes clear that having complementary favorite colors might not be enough for a lasting relationship.

Author Chaz Hayden channels his own life growing up with spinal muscular atrophy into his YA debut. Harris’ wry, matter-of-fact narration clearly outlines how he navigates the world with his disability, which includes undergoing daily nebulizer treatments to clear his lungs, using a laptop to complete classwork, and facing obstacles while eating:

“My disability makes it difficult for me to lift my arms and feed myself. Even small things like a piece of cereal or a plastic spoon pose a challenge. I used to have the muscles to eat independently, but over time I’ve lost them.”

This narrative lens hints at how the rest of the Jacobus family adjusts to the move, with Harris’ father balancing a big promotion with a long commute, and his mother taking on more work than ever before as Harris’ de facto nurse both at home and (later in the story) at school. Meanwhile, Harris’ older brother, Ollie, is trying to fit in at his own new school, where his lacrosse teammates resent his rising-star status and his willingness to speak out against their ableist comments.

As Harris learns more about Miranda and her history — which includes the death of a close friend and an abusive relationship — he begins to realize that growing closer to her might mean losing his friendships with Nory and Zander. It’s a loss he must weigh against Miranda’s ability to pull him out of his shell and toward the kinds of encounters he thinks he wants.

While Hayden teases out the complicated dynamic between these two characters, the questionable nature of Miranda’s behavior as an adult working with a teen — she not only encourages Harris to take risks but fosters an inappropriate bond between them, such as when she climbs into his bed after he gets sick — is never fully addressed.

Despite this plot hole, The First Thing About You presents a well-rounded story about first love, friendship, and high school and offers disability representation that will serve as a needed window (or mirror) for readers.

The Last Days of Terranova