This dense, scholarly work is not for casual readers. 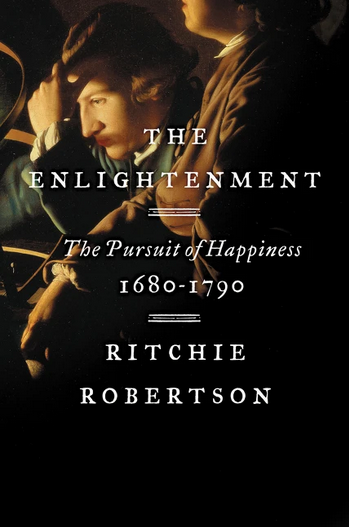 The Enlightenment: The Pursuit of Happiness, 1680-1790 is Ritchie Robertson’s effort at cataloguing all (and I do mean all) the elements that constituted society during that period and how they contributed to the “happiness” in the title. The book spans the globe and addresses almost everything that makes up a community.

But buckle up, dear reader, because this is a long, bumpy ride.

Two rather disconcerting realizations emerge as you read. First, one can’t help but notice how we seem to be backing away from the Enlightenment’s intellectually progressive principles in our “modern” times. Second, with nearly 800 pages of text, the book is exhaustive, which is a euphemism for “exhausting.” Though marketed to the general public, it seems written for scholars.

Still, it’s worth noting some of its more interesting and accessible portions. Robertson, a professor of German at Oxford University, does a decent job of establishing how Enlightenment principles helped move society beyond faith and toward science. He cites, among other examples, occasions when “The Royal Society...held experiments [that] were a recognized and well-attended form of public entertainment.”

The Enlightenment was thus a period when “nothing is accepted merely on authority…[and] general conclusions can only be based on a large number of experiments.” Clearly, it was an era during which the traditional reliance on religious principles would no longer cut it.

Too bad we appear to be backsliding today. For all the progress we made more than 200 years ago, we are now back to doubting science, questioning its guidance, and relying on our own faith-based (or Facebook-based) facts to supplant it.

Robertson also dives into how faith itself evolved. He writes that “People in the late seventeenth century [pre-Enlightenment] were still aware of the religious wars that had raged during the previous hundred years.” He lists the tragedies of the Thirty Years War in Germany, which “killed a third of the population”; the French Wars of Religion, which “were remembered as a period of desolation”; and the English Civil Wars, which saw atrocities inflicted upon the Irish, among others.

Enlightenment principles, seen in the works of such writers as Thomas Paine and Immanuel Kant, posited a dramatic shift away from religion’s primacy. While the spiritual beliefs of one’s neighbors should be treated not just with “reluctant acceptance, but [with] positive respect,” the Bible “ceased to be the inerrant Word of God and became a source of moral instruction.”

(As with its views on science, modern society seems to be regressing in the moral-instruction department. One need only look at the violence demonstrated at the U.S. Capitol on January 6th of this year to see that, increasingly, zealotry is making a comeback.)

Robertson does cast a questioning glance at the non-inclusive nature of the Enlightenment’s loosening sexual mores, which left women’s carnal freedom “strictly confined.” The author writes:

“When sexual activity was released from religious constraints, the resulting freedom tended to benefit men...since a woman was in an important sense the property of her husband, and since men did not wish to be saddled with other men’s illigitable children.”

Likewise, non-white men rarely benefited from Enlightenment growth. Robertson notes that Enlightenment darling Thomas Jefferson was a slaveholder, and he quotes some of David Hume’s writing about non-whites that is so offensive I will not reproduce it here.

The Enlightenment is a heavily researched book. As mentioned, its main text runs 800 pages, with hundreds more of notes and citations. Which begs the question of a work aimed not at academics but a general audience: Why?

What sort of lay reader seeks — and will reasonably digest — such a large-scale look at Enlightenment philosophy, science, art, religion, politics, and government in a single volume? And what neighborhood bookstore could stock more than one copy without first reinforcing its shelves?

Ultimately, The Enlightenment suffers the same flaw as other “comprehensive” works: In an attempt not to leave out anything, the author leaves in everything. The result was that it became nearly impossible for me to find evidence of the book’s central thesis: that the goal of the Enlightenment was greater human happiness. Perhaps the proof was there, but my glazed-over eyes couldn’t see it.