What can we learn from the myriad challenges we and others face? 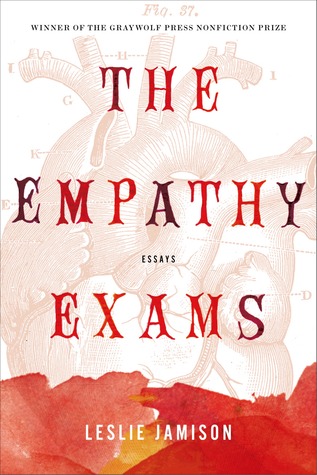 Reading Leslie Jamison for the first time, you feel like you have been let in on a great secret. You struggle with the knowledge because you want to share this incredible writer with your friends and you want to be the one who told them first about her.

On the other hand, you like the fact that you have discovered her before your friends and you want to preserve the “special” relationship you have with her. It is as if you got to see the Rolling Stones in a small club in London before they were widely known. You have a sinking feeling that you will never be able to see them in such a small venue again but you are grateful for the discovery and that shared experience.

Jamison’s Empathy Exams grants the sense that she has all of the goods to be one of the great commentators of our time. She has a keen eye for observation, an exceptional gift for a turn of phrase, and an adventurous spirit. Her book is essentially an examination of the many different facets of empathy, which Jamison reveals through her own experiences and people she meets.

The essays are, for the most part, riveting. We learn about the Barkley Marathons, arguably the toughest 100-plus mile race in the world; the West Memphis Three murder case; sufferers of the controversial Morgellons disease; Frida Kahlo’s amputated leg; and Jamison’s abortion. By exposing us to these experiences, she shows us that empathy “isn’t just listening, it’s asking the questions whose answers need to be listened to.”

The writer generally succeeds at suggesting those empathetically-necessary questions to the reader. During a stint as a medical actor, portraying patients with certain conditions for second- and third-year medical students, she draws upon her own experiences to simulate the patients’ feelings and reactions in what becomes a play of empathy drawn from empathy. In the course of telling the story of her acting, Jamison reveals her own struggle with the decision to have an abortion. As we learn about the author, she becomes an object of our empathy. She has suffered to bring us her insights. It becomes clear that only through one’s own suffering can one truly appreciate the suffering of others and attempt to salve their wounds.

It is heartbreaking that her boyfriend will never live the choice to have an abortion like she will but she comes to terms with his emotional distance. Jamison wants someone else to feel the agony for her, and yet she wants to feel it entirely for herself. It’s no surprise that another one of Jamison’s boyfriends tells her that “guessing your feelings is like charming a cobra with a stethoscope.” And yet that is perhaps the book’s most memorable lesson. Empathy requires understanding and understanding others is difficult, even when we make an enormous effort to do so.

Jamison uses her personal trials to show us that the rewards for empathy are worth the effort. We become better parents, children, friends, and colleagues for having risen above ourselves and attempted to enter someone else’s life as an observer and an aide.

Jamison’s book does not have the easy polish of Malcolm Gladwell’s writing or other pop-culture essayists. Its message is more opaque, and she doesn’t always draw clear connections between her anecdotes. But perhaps that is the point. It is raw and poignant. She makes herself vulnerable in a rare way. Life is messy and Jamison would probably be the first to admit that hers would fit that description. In this intelligent book, she shows us both the difficulty and the reward in noticing others’ messy lives, and thus suggests we can begin to help them, and ourselves, clean up.