The Edge of the Plain: How Borders Make and Break Our World

A look at lines from both sides now. 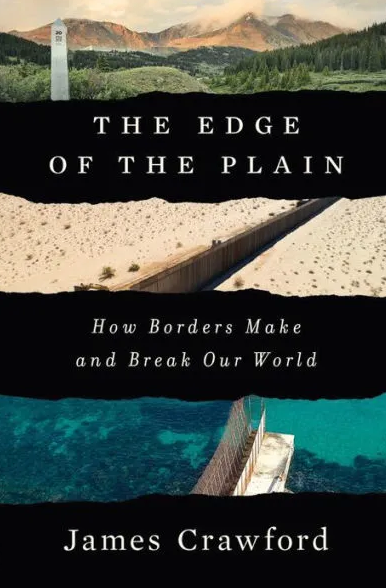 With one immense and baffling apparent exception (the universe itself), the edge of anything is also the edge of something else. We tend to think of borders in terms of passports and security checkpoints, or perhaps just signs (or cellphone-service alerts) indicating the end of one place and the beginning of another — lines on maps or GPS screens of great interest to people but generally ignored by animals and plants.

Among the principal reasons: leaders wanting to impose things like religion, taxes, and laws (and, of course, people wanting to feel safe inside their homes, their churches, their political parties, and their social groups). Some lines have been drawn peacefully. Others, not so much. (John Lennon was surely well-intentioned but unrealistic asking us to “Imagine there’s no countries,” and the Guess Who was wildly over-optimistic with “Share the Land.”)

In any number of cases, geographic borders ignore physical realities and the needs and desires of populations. Some even ensure global inequality by denying people on one side access to resources (including information, via “digital nationalism”) on the other.

Part of the research for this book took place when most of the world’s borders were closed by the covid-19 pandemic, so some of the author’s research trips were virtual (via Google Earth) by necessity. There’s sobering irony in that because protecting people against rampant sickness has long been one of the reasons for maintaining border security. In 1437, Venice created quarantine requirements for anyone arriving from a place known to harbor disease. It’s fitting, then, that the book includes a section examining how covid breaks through the borders protecting the cells in our bodies.

Other sections were informed by in-person visits to various geographic intersections that are truly edgy — including two Spanish (and therefore E.U.) enclaves surrounded by Morocco, the border between the U.S. and Mexico, and the Green Line separating Israel from Palestinian refugees in the occupied territories of the West Bank.

Tales of the people on the less-fortunate sides in each case can be painful to read. No one knows how many have died crossing the southern border of the U.S., for instance, because corpses deteriorate quickly in the desert — especially when survivors bury the dead under cairns, which retain heat and effectively cook the bodies, drawing scavengers.

As anyone who’s studied maps over time knows, borders are hardly immutable. Empires crumble and are subsumed. Portions of 10 U.S. states, including Wyoming and Kansas, were originally part of Mexico. Crawford visits with people installing markers outlining this former configuration. One from Mexico observes:

“The idea of the frontier in America is something that is at the edge and then beyond, that is waiting to be conquered. We don’t have that in Mexico because we were a conquered country. For us, no, the frontera is just a line, it is just a marker.”

While sometimes borders move because people in power negotiate deals (often under considerable duress), in other cases, movement is the result of agreements reached before surveyors had a say. The Mason-Dixon Line separating Pennsylvania from Maryland is among the most significant examples. A royal charter called for it to be 15 miles south of Philadelphia but along a latitude line north of the city. Charles Mason and Jeremiah Dixon eventually hit on the solution that bears their name and established the divider where the abolitionist North began and the slave-owning South ended. When Harriet Tubman escaped to Pennsylvania, she called it the boundary between “liberty and death.”

When the U.S. and Great Britain agreed, in 1846, to use the 49th parallel as the longest portion of the border between the U.S. and Canada, they stranded a tiny peninsula south of Vancouver, British Columbia. The 1,100 or so residents of Point Roberts, Washington, delighted in their quirky situation — having to drive nearly an hour through Canada to reach the “mainland” — until the pandemic came along and the border slammed shut.

Mother Nature can and does dictate adjustments to physical boundaries, as well. To wit: The Mississippi River forms part of the border for 10 states, but it’s changed course several times, and more than a few areas along its shores are now on the opposite side of the water from the rest of their states. Similarly, the Missouri River has meandered in such a way that Carter Lake, Iowa, is now completely surrounded by Omaha, Nebraska, and a bit of the river itself.

But what happens if water washes away an entire country? That’s what the residents of Tuvalu — a nation of small islands in the Pacific, where the highest point is 15 feet above sea level — would like to know, and soon. Theirs is but one sad story of people who are or will be refugees from climate change. The most threatened areas tend to be among the world’s poorest, and therefore least able to cope, even as wealthier countries try harder to keep refugees at bay.

While considering such existential issues, Crawford treats readers to the backstories of things often associated with borders. “No man’s land,” for example, was literally a sexist construct based on women not being allowed to own property.

By exploring obvious borders and less obvious ones and looking at how they do (or don’t) fit together, this illuminating book helps readers make sense of more than a few of our planet’s edges.

Randy Cepuch, author of A Weekend with Warren Buffett and Other Shareholder Meeting Adventures, a business-related travelogue, was in Berlin shortly after the Wall came down and brought home a handful of then-plentiful concrete debris. These days, it can be hard to determine where the border was.