This much-anticipated follow-up falls far short of its predecessor. 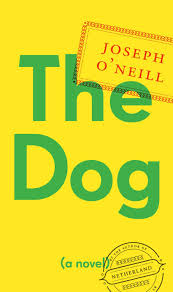 Living in a swanky waterfront highrise, cruising in a sweet ride, pulling in big bucks from a cushy (if mind-numbing) job, rubbing elbows with the mega-rich: not hard to take, you say? Then you haven’t read The Dog, Joseph O’Neill’s long-awaited follow-up to Netherland.

Unfortunately for fans of the lovely, restrained, and insightful writing of O’Neill’s previous novel, The Dog is disappointingly unlovable: a painful, sometimes painfully funny, tortured treatise on the everyday horrors and miseries of modern life, written with such lack of restraint that it feels almost like an endurance test.

Do you have what it takes? Are you tough enough to finish this novel? Perhaps that really is what O’Neill is striving for in this cautionary tale that illustrates no matter how bad things are at any given moment, they can always get exponentially worse.

When we meet our almost-nameless hero, X, previously a midlevel corporate attorney, he is several years into living with the aftermath of an imploded long-term relationship; whoever he once was, which perhaps wasn’t all that much to begin with, appears to be permanently unrecoverable.

He’s paying dearly, and on many levels, for the crime of having stayed too long and too quietly in a lopsided and suffocating situation, but one that didn’t present a compelling reason to leave until it was much too late.

It’s a testament to how bad things are made for him stateside — his bank account drained, his professional reputation in tatters, and his personal Google results sabotaged through “a fiendish new form of defamatory publishing that one might term ‘search libel’” — that X is willing to take a job offer after a chance meeting with an old college chum, Eddie, to be the “family officer” of Eddie’s ultra-rich Lebanese family in Dubai. This even after he is stood up for his surprise interview with Eddie’s irrational brother Sandro in an epic and expensive way.

In this case, “family officer” translates as well-paid errand boy, janitor, and baby sitter, the rubber-stamping drudge whose signature is required on byzantine and highly suspect financial dealings. We see almost immediately how badly this is working out, as X composes mental emails to the two Batros brothers that he knows he will never send. They are pointless; no one listens to him.

So, yes, X works for the Batros family and, yes, we end up meeting Alain, the “Al” in the family — Get it? Al Batros. Albatross. — Sandro’s sullen, obese, badly parented 15-year-old son who portends ill for X.

More than anything, X — who offers that he is the dog, always living in the doghouse — wants simply to be acknowledged as “your presumably decent human being presumably doing a pretty decent job of doing his best to do the right thing in what is, however you look at it, a difficult world.”

He expends significant effort attempting to be considerate of others, especially the less fortunate, offering a 10-point treatise (with subclauses) to outline his position on providing charitable donations to help out the foreign workers who toil in near-slavery in the United Arab Emirates, and taking pains to ensure that the women he pays for sex are not victims of trafficking or coercion.

His only comforts in an otherwise intolerable existence are sex with those women, of whom he only requires that they be nice to him; occasional pedicures provided by his diving buddy Ollie; and the use of a state-of-the-art massage chair. He defends his ownership of this chair by saying, “It’s not as if it’s stuffed with miniscule underlings coerced into massaging me.”

If all this screams “first-world problems,” it’s still hard to watch X “dreading the empty and shameful hours and days and weeks and years ahead.” Everyone deserves to be the hero of his own life, but X understands that he has washed out of his: not a has-been, but a never-was.

It is tough to understand what O’Neill is going for in the approach he takes in the novel, making his readers work very hard in puzzling ways. The voice is markedly inconsistent. Sometimes, the story comes almost as one long aside, as though X might be offering all this to some guy he met in a bar, and it is stuffed with pages-long, multi-nested, parenthetical digressions. It’s a gimmicky and aggravating device, with O’Neill insisting you notice how many asides he can nest inside the next and then close them all at once. (The answer is six.)

Then, in huge stretches, X launches into disquisitions on a stunning array of topics, usually in protracted and impenetrable pseudo-legalese. O’Neill dares his readers to slog through it, to read it all. The effect is alienating — perhaps intentionally so, but it’s a perilous tactic.

He treats with disdain the people who keep score of others’ lives, and notes, “The uncharitable observer — is there another kind?”

As the book nears its close, the reader who has made it this far wonders with increasing urgency how the tale will end, since it does not appear to be working its way toward resolution.

O’Neill keeps us anxious to the very last. In a story like this, “happy” is far too much to expect, but the fact that X finally makes one decision for himself is perhaps the closest we can hope to get.

An Elderly Lady Is Up to No Good