The Deviant’s War: The Homosexual vs. The United States of America 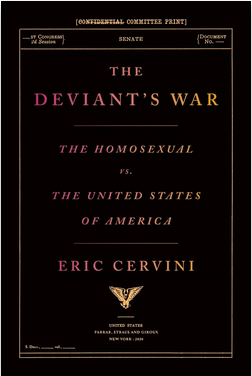 With all due respect, if Hollywood were to cast a gay-rights messiah, Frank Kameny wouldn’t make it past Central Casting. Geeky, balding, scrappy, diminutive, adept at avoiding creditors but helpless at finding true love, scornful of the people who opposed him and authoritarian with the ones who didn’t, he was a martyr who made the tactical error of living long enough to let America catch up with him.

Kameny even had the satisfaction of being invited to the Oval Office when President Obama repealed the U.S. military’s “Don’t Ask, Don’t Tell” policy. Perhaps the only time Kameny honored the dictates of show business was when he died on National Coming Out Day, a concept he’d been privately and publicly exhorting for half a century.

But by the testimony of Eric Cervini’s ambitious, diffuse historical chronicle, The Deviant’s War, Kameny was just the fellow gay folks needed, even when they didn’t know it. A Harvard-trained astronomer, he didn’t freely embrace his sexual identity until he was 29, but once he did, he took to it “as if it had been made for me, or I for it.”

In 1956, he was arrested in a San Francisco men’s room on charges of lewd conduct and loitering. He pleaded guilty and paid a $50 fine, thinking he had put it behind him, but once his employer, the Army Map Service, got wind of the arrest, he was done for.

Never again would he work for the U.S. government — though not for want of trying — and his inability to get a security clearance would leave him unemployed and destitute for long stretches of his life, forcing him to survive on speaking fees and a mother’s love.

At the same time, it would lead him toward his true calling. In an all-out effort to reclaim his job, Kameny became, in 1961, the first openly gay man to petition the Supreme Court. The brief was his own — in Cervini’s words, “a declaration of war by a new political entity: the proud plaintiff” — and even now, under a cloud of legalese, it stirs the soul:

“Petitioner asserts, flatly, unequivocally, and absolutely uncompromisingly, that homosexuality, whether by mere inclination or by overt act, is not only not immoral, but that for those choosing voluntarily to engage in homosexual acts, such acts are moral in a real and positive sense, and are good, right, and desirable, socially and personally.”

Or, to quote the slogan Kameny would later coin, “Gay is Good.”

What registers as a truism today to generations of gays and lesbians cudgeled by divine and secular law was, at that time, the definition of news. As the head of the Mattachine Society of Washington, DC, Kameny would take up the causes of other gay-purge victims, a “dual strategy of lawsuits and demonstrations” that was as unglamorous as he was.

Surviving photographs help convey what a 1960s Mattachine march looked like: a slow-moving, well-groomed circuit of men in suits and women in dresses, with clearly lettered signs, doing their best not to inflame. Kameny believed if you wanted employment rights, you had to look employable, so he wouldn’t let picketers smoke or talk among themselves, or leave without permission. Once he went so far as to pry apart two men who were holding hands.

It stands to reason that a Washingtonian bent on assimilation would grow uneasy when, in June of 1969, a group of unruly drag queens fiercely and publicly resisted arrest in Greenwich Village. And it’s telling that, in the heady days following the Stonewall riots, Mattachine Society representatives were the ones pleading for “peaceful and quiet conduct.”

To some observers, Frank Kameny’s movement was starting to look a lot like Frank Kameny, and if Gay was Good, why were uptight white men more good than, say, drag queens or lesbians or people of color or guys who wanted to hold their boyfriends’ hands?

That internecine rift has never been entirely resolved, and the strains carry down to the LGBTQ movement of today, with Mattachine’s centrist, jacket-and-tie notes finding their truest modern expression in the Human Rights Campaign (which reaps financial rewards Kameny could never have imagined).

Something of those ancient quarrels also informs Cervini’s book, which is so bent on capturing the whole quilt of gay liberation — from Harry Hay and Bayard Rustin to Barbara Giddings and Evelyn Hooker — that it threatens to lose its most precious thread: Cervini’s unprecedented access to the Kameny archives.

The Deviant’s War is most alive when delivering us this principled, uningratiating character on his own terms and most provocative when arguing for the bravery of a Queens-born Jew who, in August 1963, stood up to three-and-a-half hours of interrogation from a deeply hostile Texas congressman bent on revoking the Mattachine Society’s license.

It was Kameny who, on being told that homosexuality was unnatural, declared: “I will point out that the eating of cooked food, the wearing of clothes, and the meeting of this committee this morning in a cooled room on a hot summer day can all be considered to be in violation of the laws of nature.”

Be it resolved, then, that as we praise the full LGBTQ spectrum, we praise him, too, and that, before we’re done, we pause to wonder what Frank Kameny the astronomer might have accomplished.

Louis Bayard is a novelist and reviewer whose most recent book is Courting Mr. Lincoln.

No Beast So Fierce