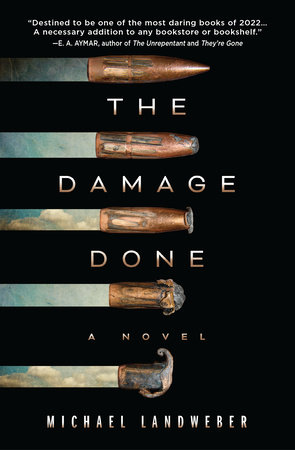 In the highly enjoyable The Damage Done, the latest novel by Michael Landweber, the unimaginable has happened: By some unknown force, violence against others has been rendered impossible. Landweber, an occasional contributor to the Independent, is the author of several works of fantasy. Here, he expands on the genre, using imaginative fiction to explore real-life issues.

He relies on a series of intertwined characters and scenes to tell the tale, creating a tapestry of images that make up a world. Importantly, this framework serves as a reminder that we can all be emotionally interconnected once we move past the era of physical threats.

For example, Landweber presents us with a neighborhood once riddled with crime where residents can finally — thanks to the newfound absence of violence — leave their homes without fear of being shot. He also shares the story of an abused wife whose husband no longer has the power to terrify her with his fists. And he brings us into the life of a high schooler who would previously grow nauseated with anxiety when facing the wrath of a now-thwarted bully.

What would you do if threats to your wellbeing disappeared? If you were Ann, the erstwhile battered spouse, how would you view your husband? If you were “the Empty Shell,” a once-imprisoned dissident, how would you treat your former jailers? Or if you were Marcus, whose brother — “the Last Victim” — is murdered just before the violence ends and who becomes the face of the before times?

Well, if you’re Marcus, you feel twice victimized — first by the act of violence that took your brother, and then by the society that turned him into a symbol. Likewise, the Empty Shell quickly becomes known not just for his important written manifestos (which landed him in prison in the first place), but as an emblem for a spectacular, televised stand against tyranny. Here and elsewhere, the author paints a sympathetic picture of how victims of violence are retraumatized by a society that desperately needs symbols in order to understand that violence.

And what about the perpetrators now unable to inflict terror on others? Unfortunately, in this reality, as in our own, hate finds a way. If the school bully can no longer beat you up, he can always mock you with homophobic slurs. And a monstrous husband suddenly unable to smack his wife can still assert his dominance by destroying her property. It is to Landweber’s credit that he doesn’t sugarcoat the reality of human nature: Ending physical violence merely reveals our bottomless ability to exact pain in other ways.

The novel also explores the difference between U.S. violence and that of other nations. It’s interesting that despite the stereotype of America — one of a lawless shooting gallery — we’re actually a pretty safe place and lack the horror of living under a dictatorship. (For now, anyway.) In Landweber’s fantasy, America is less impacted by the end of violence than are other places. Perhaps we’ve simply perfected clever, less obvious forms of viciousness.

The Damage Done is a fine work, one that forces us to consider how we’d respond were physical violence to end. Would we use our freed-up mental space to invent fresh cruelties, or might we harness it to advance the common cause of humanity? And if a violence-free world were really within reach, would we be brave enough to live in it? I won’t give anything about the book’s conclusion away except to say that the reader’s time is rewarded.

Tesla: A Portrait with Masks, a Novel

By Vladimir Pištalo; translated by Bogdan Rakić and John Jeffries