Mothers and Other Strangers: A Novel 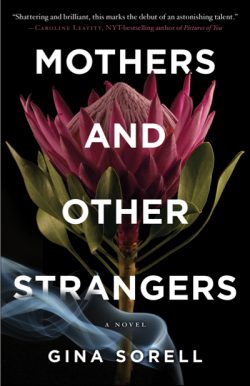 The first sentence of Mothers and Other Strangers throws you immediately into the turmoil of a dysfunctional family: “My father proposed to my mother at gunpoint when she was nineteen, and knowing that she was already pregnant with a dead man’s child, she accepted.”

Elsie, the child, narrates the story of her relationship with her mother, Rachel. The two were estranged for many years; Elsie didn’t know that Rachel was sick, much less dying. After her mother passes, she returns home to close the apartment and look for clues as to what drove Rachel.

Soon after she arrives, someone breaks into the place and ransacks it. Elsie has no idea why. Rachel wasn’t rich; however, she did belong to a “secret new-agey group, The Seekers.” Elsie doesn’t trust the leaders of the sect — for reasons which eventually become clear — and wonders if they are behind the break-in.

As she goes through papers and traces Rachel’s footsteps, Elsie meets a woman at a pawnshop. Rachel evidently hocked many pieces of jewelry — items Elsie never knew existed.

The woman gives Elsie an unsold jade ring with a huge diamond appraised at a fortune. Then, a neighbor hands over a locked box Rachel had asked her to hide. As Elsie says, “It had taken me a long time and several thousand miles to try to get over my failed relationship with my mother, and in one day I realized I had no idea who she was.”

At this point, the reader is firmly inside a mystery and eager for Elsie to unravel it. The delight of a whodunit is to be led step by step through the process of uncovering what has happened. False clues may be given, personalities may emerge, but stray too far from this delving and the story may go slack. Author Gina Sorell takes the risk, moving beyond Elsie’s search for answers in the present to focus on the long trail of her life: How she has been shaped by everything Rachel did and was.

Elsie’s earliest memories are of Africa, a happy time, but then her stepfather, the man with the gun, died, and Rachel precipitously moved with her daughter to Canada. The event that sent them overseas is vague in Elsie’s mind, but has left her dreaming of fire.

When Elsie was a teenager, the beautiful Rachel competed with her, forcing herself center stage, always receiving, never giving. Elsie feels she was raised as her mother’s audience, not her child. Interestingly, as an adult, Elsie becomes a dancer, supplying herself with her own audience.

Rachel’s ongoing narcissism and jealousy are stunning. She refuses to attend Elsie’s dance performances, degrades her in front of Seeker members, and even tries to seduce Elsie’s boyfriend, Ted.

Fortunately, Ted sees through Rachel, and with him, Elsie has her one happy relationship and escapes (for a while) her mother’s influence. But because of infertility, she chooses to end their marriage rather than face her perceived inadequacy. “One more branch removed from my ever shrinking family tree.”

As the novel swings between past events and their present-day effect on Elsie, the reader is taken further from the opening events, not closer. As one might expect, Rachel’s past behavior weighs heavily on Elsie’s life. In addition to the infertility, she lives through bulimia, depression, drugs, and rape — a load perhaps too big for a single character.

By the time Elsie’s life has been thoroughly unearthed, the mystery has been buried under her suffering, and Rachel has faded from the story. The denouement, when it comes, is quickly told and, although appropriate, lacks the force of a detailed unveiling.

Sorell has taken on a big challenge in attempting to reveal across time and continents a life-changing relationship, and she has not quite succeeded. Still, the opening of the novel will intrigue lovers of mystery, and the center will appeal to those interested in how psyches are shaped. Throughout, her serviceable writing makes for easy reading, and the many plot twists give the story drive. A reader who knows what to expect will take pleasure in this book.

Terri Lewis is a writer looking for an agent who loves character-driven novels (with a plot). She lives happily in DC with her hubby and two dogs.