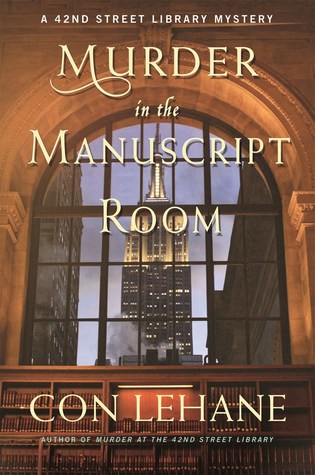 As a person who spent her bookish youth in libraries, I was drawn to this story by its title. The protagonist of Murder in the Manuscript Room, Raymond Ambler, is a librarian at the New York Public Library who is curating its collection of American mystery novels.

The exhibit, “A Century-and-a-Half of Murder and Mystery in New York City,” is due to open soon. Before that can happen, however, Ambler is distracted by a dead body in his office, awakening a desire in him to investigate mystery and intrigue on his own turf.

A friend of Ambler’s, NYPD detective Mike Cosgrove, introduces him to Paul Higgins, who has written a few “vigilante-hero versus evil-to-the-core-criminal thrillers.” Higgins, who worked for NYPD intelligence for more than 30 years, kept meticulous notes and copies of his files, and wants to donate them to the library. Some of these files will be made public, while others will be sealed for years.

To maintain secrecy, Higgins delivers them late at night.

One focal point of the novel is Ambler’s relationship with his son, who is in prison. While there, he has developed a friendship with an old pal of Ambler’s, Devon Thomas, who was convicted of murdering a union boss in the early 1980s. Now, Thomas claims he is innocent and wants Ambler to investigate. Ambler hopes there in something in Higgins’ files to exonerate Thomas.

During a visit to the library, Higgins and Ambler run into Ambler’s good friend Adele Morgan and her friend Leila Stone. Ambler introduces the women to Higgins, but Leila is less than friendly.

At lunch with Adele, Leila asks pointed questions about a scholar named Gobi Tabrizi, a handsome man from Palestine by way of Syria. (Adele has befriended and trusts Tabrizi, but Ambler and Cosgrove are wary of him.) Leila turns up at Adele’s apartment that evening frightened and panicky, afraid of her ex-husband.

When Leila’s body is later found in Ambler’s office, suspicion falls on Tabrizi. That suspicion is encouraged by an ex-intelligence agent, Brad Campbell, who owns his own security firm. Campbell takes charge of the murder investigation. Meanwhile, Thomas is killed in prison.

Are the two deaths — Leila’s and Thomas’ — connected? They seem to be: Adele’s things, Leila’s apartment, and the donated Higgins papers are rifled through by someone unknown. It’s up to Ambler, Cosgrove, and a bartender named McNulty to find out who that someone is and what he or she is looking for.

Ray Ambler is an insightful amateur detective, but this is a perhaps too complex a plot, complete with red herrings, numerous minor characters, and a few twists. Details and development of most characters are thorough and enlightening, but others are sketchy and, in some cases, non-existent.

We know that Adele, for instance, is pretty but at times “remote, lost in herself in a way that seemed to exclude anyone else.” She is slim, has brown eyes, and wears her hair (what color?) in a ponytail. Ambler, strangely, is hard to picture. It’s hinted that he is older than Adele, but we don’t learn his age. Nor do we get a physical description of him.

A few other irritating questions pop up: How was Leila killed? No one even asks. If her body was “dumped” in Ambler’s office, where was she killed? Was it investigated? Whom does Campbell report to? And how did the person who did all that hunting through various papers gain access to them, especially the ones in the library?

The story shows promise; the dialogue is amiably natural. Unfortunately, the author weaves in various subplots that depend on previous books for complete explanation. When a series of novels is contemplated, it’s necessary to update the reader as each book is developed.

As a reader of mystery novels, I expected the plot to be tighter and all the questions to be answered. Most are, but some basic information is missing. It seems that the author needs to decide what type of book he is writing: a crime novel or a mystery. Murder in the Manuscript Room tries to be both.

Susan Guthrie Knight is a sometimes writer but more often reader who lives above Gettysburg, PA, surrounded by orchards. She is a lifelong devotee of the mystery genre.