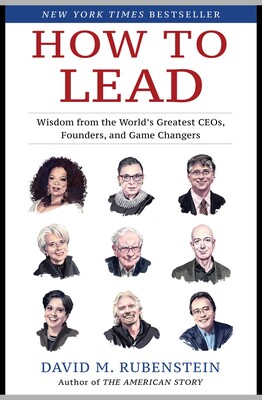 The Irish were the first to master the art of television conversation with “The Late, Late Show,” moderated by Gabe Byrne in Dublin from 1962-1990, and still running today with various hosts. Then came the British with David Frost, who hosted several U.K. “chat shows” before coming to America with “The David Frost Show,” and rising to international prominence in 1977 with his five 90-minute interviews with Richard Nixon, which forced the former president to acknowledge and apologize for Watergate. One of Frost’s many successors in London is Clive James, who currently hosts “Talking in the Library.”

In the U.S., Larry King held sway on CNN every weeknight with “Larry King Live!” where he reigned for 25 years in colorful suspenders. He was followed by Charlie Rose, who invited guests to join him at his table on PBS from 1991 to 2017. When Rose was summarily fired for sexual harassment, he and his table were banished and replaced by two sturdy chairs for David M. Rubenstein to interview the great and the good on “The David Rubenstein Show.”

A co-founder of the Carlyle Group, a DC-based, multinational, private-equity investment firm, Rubenstein is a spectacular businessman worth $3.4 billion, and he’s capitalizing on his television show by publishing some of his interviews. His first book, The American Story: Conversations with Master Historians, published in 2019, was very good. His second, How to Lead: Wisdom from the World’s Greatest CEOs, Founders, and Game Changers, published last month, is okay.

Half of Rubenstein’s leaders, mostly white males, hold degrees from Harvard, Yale, Princeton, Columbia, with a couple from Stanford. Not so the women, few of whom possess those prized credentials, with the exception of the late Justice Ginsburg.

In his introduction, Rubenstein presents his formula for becoming a world-class leader. Moses had 10 Commandments; Rubenstein has 12:

Rubenstein comes to all his interviews well prepared, if a bit short on charm. He’s developed a style much like Jack Webb on “Dragnet”: “Just the facts, Ma’am.” He’s respectful to his guests, even as his questions probe.

Interviewing Melinda Gates, he asks if it was difficult for her as a committed Catholic to promote birth control in third-world countries as part of her work with the Bill and Melinda Gates Foundation. She admits she’d wrestled with her faith on the issue but finally resolved her conscience in favor of contraception.

(Here, Rubenstein admits his own financial failure, the biggest business mistake he made, selling his firm’s equity in Amazon for $80 million in 1996, which, today, would be worth “about $4 billion.”)

In his interview, Bezos reveals a man devoted to his parents. “One of the great gifts I got is my mom and dad,” he says. “I was always loved. My parents loved me unconditionally.” He adds that he’s committed to eight hours of sleep every night, and reserves “high IQ meetings” for mid-morning, when he has his best energy. He says the most important work he’s doing at present is investing in the future by putting $1 billion a year of his own money into Blue Origin, his aspirational program to make expanded human space travel a reality.

The only one of Rubenstein’s leaders without a college degree, let alone the advanced degrees that most of the others hold, is Richard Branson, a dyslexic who dropped out of school at 15. “Do you think you could have been more successful in life if you had a university degree?” Rubenstein asks. “No,” says Branson, who founded Virgin Group, an umbrella for hundreds of Virgin enterprises, including Virgin Airlines, Virgin Megastores, and Virgin Galactic. Branson is worth $4.2 billion.

Many of Rubenstein’s leaders are billionaires like himself, and with or without Ivy League credentials, all are accomplished and deserve their position at the top of the heap. For this book, Rubenstein includes his double interview with two former two-term presidents, Bill Clinton and George W. Bush.

But he has not interviewed his former boss, Jimmy Carter, a one-term president who many consider a leader in humanitarian outreach. Rubenstein characterizes Carter’s term in office as a “failed White House.” Yet Carter established the Department of Energy in 1977 and the Department of Education in 1979.

He cut the deficit, ended rampant inflation, and managed to get more of his legislation passed than any president since WWII, with the exception of Lyndon Johnson. And Carter, a Nobel laureate, is the only president since Thomas Jefferson under whom the U.S. military never fired a shot.

With all due respect to the billionaire Rubenstein, Carter’s presidency, while only four years, can hardly be dismissed as a failure.