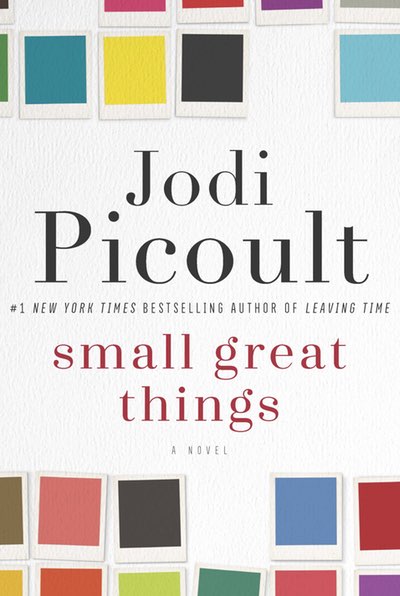 For 20 years, Jodi Picoult has wanted to write about racism in America, and the resulting contemporary novel, Small Great Things, is consequently crammed with information everyone should know about this topic but possibly doesn’t.

The plot is set in motion when Turk Bauer, a skinhead white supremacist, officially forbids Ruth Jefferson, an African-American labor and delivery nurse, to touch his newborn son. When the baby stops breathing while Ruth is alone in the nursery, she attempts to revive him but stops as the head nurse enters, lest she be fired for disobeying orders.

When the baby codes, the parents see Ruth administering CPR as part of the emergency team and assume she has caused the child’s subsequent death as revenge for their discrimination. Ruth is charged with murder, and Kennedy McQuarrie, a white public defender, takes her case.

Picoult’s extensive research on the topic of racism is an attempt to educate her readers. She points out the error of those who’ve failed to acknowledge their own prejudice and includes varied and painful examples of the daily psychological injuries suffered by people of color.

Yet she is so intent on presenting every aspect of the topic that her characters become subservient to that goal. For example, light-skinned Ruth has worked so hard to fit in that she occasionally seems surprised to discover she’s African American; at other times, she is all too aware of the ways she has always been discriminated against.

It’s not clear how her naiveté has survived in the face of her experiences, and these inconsistencies for the sake of loading racial information onto her character make it difficult to get a true emotional fix.

Still, Picoult’s scenes have the power to move readers, as in the opening scene where, as a child, Ruth witnesses her mother, a domestic, deliver her employee’s baby and for one glorious moment feels them all equal in their joy.

This is followed by another incredible scene where Ruth describes comforting the parents of a baby born without a face who will die in the next few hours. Then, curiously, she explains at length how she also provides extra care for the many mothers worried about their looks. She says, “A back rub. An epidural. A little Maybelline.”

I thought I’d misread that line or just didn’t get it; but when polled, a representative sample of my friends assured me that during labor and for many days after delivery, mascara was the last thing on their minds.

Ruth reacts in other contradictory ways that manipulate the plot but leave me mystified as to what I’m supposed to make of her. The most glaring is the moment she hesitates to pick up the struggling baby (who is turning blue) because she might lose her job. Based on everything I’ve been told about her, I just can’t buy this. It’s far from the only moment tweaked for the sake of drama.

For example, the skinhead who makes sure Ruth doesn’t touch his baby accepts an African-American lawyer to prosecute her. His rabid racism is explained by the fact that his brother was killed by a not-at-fault black driver, which too neatly and rationally sidesteps the issue of systemic racism that we all pick up through cultural scripting.

Public defender McQuarrie’s psychology for selecting the jurors for a racially fraught trial is fascinating, but when the medical team who attempted to resuscitate the baby all testify that Ruth did nothing wrong, the entire trial seems artificially rigged. I have more examples, but you get my drift.

Some readers will keep going because there is so much to be outraged over, or they will be fascinated by the many, many birth scenes, or they will be shocked by the quick glimpses of skinhead wilding and the white-supremacist network.

But this is a long book with many technical issues. It bogs down in repetitions and flat scenes that are not well edited. The three first-person narrators sound so alike I sometimes forgot if I was reading the lawyer, the skinhead, or the nurse. They often repeat information without advancing the story; parts of the trial read like a transcript rather than a courtroom drama; and hunks of backstory repeatedly disturb the flow of the action.

I admire the motivation that inspired this novel and believe many of Picoult’s readers will learn from it as she intended. There’s no arguing that, as a country, we need to become more aware of how racism affects us all, especially those it is directed against. But if you’re interested in the subject, read Ralph Ellison’s Invisible Man, which covers the many facets of the problem and is a true masterpiece.

Barbara Esstman does developmental editing with individual clients. Her novels, The Other Anna and Night Ride Home, were published by Harcourt Brace, Harper Collins, and numerous foreign presses, and were also adapted for TV film by Hallmark Productions.