Leave the World Behind: A Novel

Scattered perspectives and a lack of drama undermine this otherwise beautifully written story. 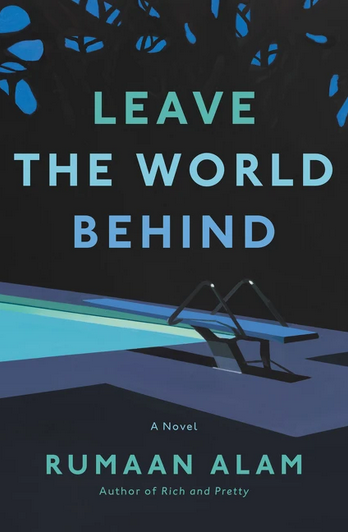 The beginning of Leave the World Behind, the new novel by Rumaan Alam, is full of promise. Clay, a professor, and Amanda, a media professional, escape New York City to a beautiful rental house on Long Island for a vacation. Keen details pull the reader right in: Amanda spends lavishly on a long list of food items, including “Ben & Jerry’s politically virtuous ice cream,” “two tumescent zucchini,” “marbled green and shocking orange” heirloom tomatoes, and “a sandy bundle of cilantro.”

Clay stealthily smokes a cigarette on the front lawn, while their kids, Rose and Archie, are in the pool behind the house. “The house between him and them was not so large, but the trees absorbed their noise as cotton might blood.”

The writing is spectacular, and we begin to get to know the vacationers. Amanda does the New York Times crossword on her phone to prevent dementia. Clay means to write a book review for the Times, but he “wanted to be asked to write” it more than actually write it.

They also think the house is out of their league, though they happily “pantomime ownership” for the time being. “Clay had tenure, and Amanda had the title of director, but they did not have level floors and central air conditioning.” Amanda guesses that the owners are wealthy, and she is impressed by their taste.

Then, just as they’re settling in, there’s an unexpected knock on the door. It’s an older Black couple, Ruth and G.H., who say they are the owners of the house. That’s, of course, not how Airbnb works; owners cannot simply show up. But they have a solid reason: They’ve escaped a blackout in the city, and so Clay decides to let them stay.

There’s a simmering tension between the two families — a successful white couple and an even more successful Black one — but this story isn’t really about race. Instead, it’s about how all four of the adults, and to a lesser extent the children, cope with some sort of a catastrophe unfolding in the larger world.

This is when the novel begins to falter. The author makes an odd choice, writing from multiple perspectives — a notoriously hard feat to pull off. Instead of getting to know one or two characters really well, the reader suffers a lengthy whiplash, shuttling among six people’s perspectives — yes, even the children’s. In some scenes, we flit among the perspectives of all four adults.

So, we scratch the surface of every character’s personality, but it’s hard to begin to care for any of them as they process the shifting reality around them. And to make matters worse, it’s often hard to tell who’s who.

“reunite with those possessions: rub them on their skin, scatter them around the rooms, and feel truly at home. They’d pull off their clothes — what was the point having a home in the country if you couldn’t walk around mostly naked? — and make Manhattans and slip into the pool or the hot tub or just into the bed.”

It’s a relief when Clay goes off on a futile drive and gets lost because it allows us to remain with him for a while. As he’s driving, he sees a woman who turns out to be a Spanish speaker, most likely a housekeeper or maid. She is distraught and effusive, but he doesn't understand her, and so he drives away. “He needed to be away from her more even than he needed to be with his family.”

And this scene is a good encapsulation of both what’s wonderful and frustrating about this novel. It’s a realistic portrayal of how human beings act during difficult circumstances. But, unfortunately, while there’s a lot of underlying tension in that scene, there’s not nearly enough drama throughout. Essentially, the characters deal with disaster by waiting, baking cake, or driving away.

This is not to say there aren’t moments of beauty and surprise in the story. There’s so much that works wonderfully: acts of kindness, asexual intimacy, disappointment, parental love, and horror. But despite the skilled writing and stretches of effective storytelling, Leave the World Behind ultimately struggles to free itself from the clutches of a few fatal choices the novelist makes.