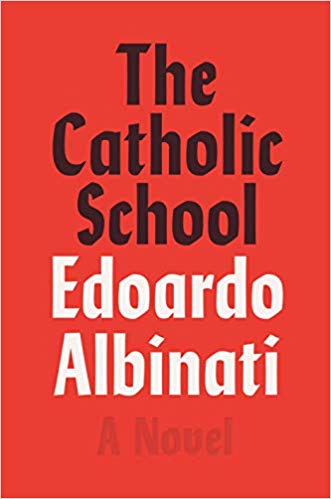 The Catholic School is a 250-page book. Unfortunately, finding that book inside the 1,200+ pages here, much like extracting a sculpture from a block of marble, demands extensive excavation. And, unlike the marble, those pages are not contiguous, so there’ll be some assembly required.

(Honestly, I’d be interested to know about the editing involved here. Did the manuscript start out at 2,500 pages, and this is a vast improvement?)

No matter what the cover says, this is not a novel. It reads like pieces of a memoir buried under 10 years’ worth of notes for a graduate seminar the author never actually taught, the title of which — I’m guessing — was, “Rape: The Inevitable Consequence of the Existence of Women. (Oh, and the Middle Class Sucks.)”

Perhaps we’re to believe that the Edoardo Albinati who is writing all this down is the alter ego of Edoardo Albinati the actual author, and so we should forgive the latter for the self-indulgent, misogynistic claptrap that this fictional former is spewing.

The stated leaping-off point for this project is the real-life kidnapping, rape, and murder of two young Italian girls by three privileged boys, at least one of whom was the author’s passing acquaintance at the private boys’ institution — yes, the Catholic school — they both attended.

The author tidily wraps this horror into an acronym: “The event that gave rise to this book is the so-called Circeo Rape/Murder, September 29, 1975: hereinafter the CR/M.” He repeatedly refers to the three murderers, one of whom was never apprehended, as the “protagonists” of his story. That would be more offensive if there were a story here in which they could serve as protagonists.

With wearying regularity, Albinati plows the ideas of:

That this book won Italy’s highest honor for fiction, the Strega Prize, makes me wonder: Do they go by poundage? Did each judge figure the other guy had read it? How exactly does this qualify as fiction? Weren’t there other submissions? Is this some sort of an inside joke?

I’ll concede that I simply may not understand modern Italian sensibilities and, thus, I’m missing the crux of what his target audience will appreciate. I do, however, question the publisher’s assessment of modern American sensibilities in its selection of this translated work for its catalog.

What about this manuscript spoke to them? Was it enduring the 100-plus-page — and that’s just the part that fills the entirety of the 800s and into the 900s, not counting the other runs at the topic scattered throughout — exegesis on the origin, causation, and meaning of rape, filled with such jaw-dropping pronouncements as: “A man may make use of a female body in one of four ways: by paying the woman for her services, by viewing an image of her body, nude or clothed, in still photo or film, by seducing her, or by kidnapping her.”

It’s a wonder that the author was able to make it through these endless discussions of violent sexual acts without becoming a desiccated husk drained of all bodily fluids.

I am fairly certain that the author sees himself as an enlightened champion of women, one of the good guys, “woke.” I can imagine protestations that these hateful musings — such as how unbelievable it is that wives are now allowed to say no to their husbands’ sexual demands, or that rape is really a crime against men because the rapist cut in front of all the guys gamely following those tiresome societal rules about courtship and consent — are simply the author’s way of showing what sort of warped thinking we’re all up against.

That argument holds no water, given, for example, the number of times he enumerates — with renewed enthusiasm and a fresh list with each instance — the many implements that can be used to violate a woman if one’s own member is not up to the task. Given how frequently he observes that the two victims weren’t even all that attractive. Given that he reduces the victims — one of whom improbably survived, locked in a car trunk with her dead friend after their torturers were certain they were both dead — to anonymous, interchangeable stand-ins for all women.

If Albinati had confined himself to writing a memoir — whether or not he decided to call it fiction — this would have been a readable, probably interesting, even illuminating book that would blessedly have been about 900 pages shorter.

In the time I spent with this book, I could have read four or five engaging, enlightening, enjoyable others. Certainly, I considered abandoning it more than once, but then I noticed it was named on a few “Best Books of August” lists — by people who have not read it, I bet — so I had to finish it in order to credibly tell people not to waste their time.

If, as James Joyce said, “Life is too short to read a bad book,” then it’s for darn sure too short to spend any time with a self-indulgent author’s 1,200-page vanity project.

Jennifer Bort Yacovissi’s debut novel, Up the Hill to Home, tells the story of four generations of a family in Washington, DC, from the Civil War to the Great Depression. Jenny is a member of PEN/America and the National Book Critics’ Circle and writes a monthly column and reviews regularly for the Independent, on whose board she serves. Her short fiction has appeared in Gargoyle and Pen-in-Hand. She served as chair of the 2017 and 2018 Washington Writers Conference and, for several recent years, was president of the Annapolis chapter of the Maryland Writers Association.