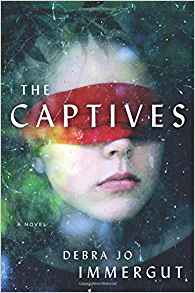 A quick scroll reveals about half of my Facebook friends attended Walt Whitman High School in Bethesda, Maryland, in the early 1980s. Sure, I’ve met fine new people along the way, but is there anything quite like an old school connection? Your first girlfriend at the first awkward dance? The best friend who would stay up until 2 a.m. talking with you about the virtues of Elvis Costello’s latest album?

That comforting cocoon of a clique that helped you stomach the unique taste of teenage angst? In her excellent new novel, The Captives, Debra Jo Immergut (a Whitman alum) reminds us that you can leave high school, but it never leaves you.

“We age, we grow, we struggle very diligently to evolve and progress, but by some inescapable law of nature, the teenage self remains the essential self,” psychologist protagonist Frank Lundquist reflects. “It will follow you down every byway and basement corridor. And sometimes it will catch up to you, throw its gangly arms around you, dampen your neck with its hot breath.”

Poor Lundquist. Damaged professionally and emotionally, doomed to loiter in his famous psychologist father’s shadow, his life is further complicated when Miranda Greene, his long-ago crush who didn’t notice him in high school, shows up as an inmate at the prison where Lundquist’s downward spiral has left his tattered career. Going through the motions, lethargically counseling female prisoners, he’s on auto-pilot until this blast from the past blows up life as he’s known it.

Grown-up life imitates high school at this first professional encounter decades later: His pulse begins to race; she registers zero recognition. The ethics here are clear, and Lundquist knows it: “Refrain from taking on a professional role when objectivity could be impaired,” Immergut quotes from The American Psychological Ethical Principles and Codes of Conduct. Diving into intimate therapy with one’s past obsession surely qualifies as a no-no.

Lundquist wrestles with it — a little. However, his teenage lizard brain takes charge relatively quickly, and he begins what proves to be a complex, problematic doctor/patient relationship, to put it mildly.

Immergut is at her best when telling the story through Lundquist’s eyes. He’s an interesting character, shrouded as he is in flaw and failure, and it’s hard not to empathize with even his most foolish decisions.

The alternating voice of Greene, while interesting, is less compelling, though it could be because her story and self-awareness necessarily unfold at a more convoluted, slower pace. Lundquist also benefits from telling his side of things in the first person, as opposed to Greene’s more detached third-person narrative.

The story moves along briskly and skillfully straddles the line between literature and thriller. The best elements of both are woven throughout the book. The writing is insightful and crisp, the supporting characters, especially Lundquist’s brother and Greene’s father, add rewarding layers to the story. Immergut has built a world, no matter how harsh and tragic, where a visitor wants to stick around to learn how it all comes out.

She also demonstrates nuanced understanding of the family dynamics that refract throughout the households. If Lundquist can’t measure up to his father, daughter Greene’s dad, a failed one-term-congressman-turned-cringing-lobbyist, is an outsized influence in her life, too. It’s a different kind of imbalance, yet both children are in some ways defined by their relationship with their father.

Each year on the night before Thanksgiving, a gaggle of my former Whitman Vikings classmates gather at the Irish Inn at Glen Echo, Maryland. The cliques have blurred, if not disappeared entirely, and some of us even show a modicum of character growth here and there. It’s a fun evening. Then we post the pictures on Facebook, tag each other, add some inside jokes, and return to our grown-up lives for the next 12 months.

[Editor’s note: Debra Jo Immergut, along with fellow novelist Hannah Pittard, will appear at Politics and Prose in Washington, DC, on Sat., June 16th, at 1 p.m. Click here for details.]

Michael Causey is the co-host of the radio program Get Up! on WOWD 94.3 FM Takoma Park. He attended high school with Immergut, observed her talents on the school newspaper, and always suspected she’d write a good novel.

Looking beyond the shallowness of imitation for a take on the contemporary, vibrant nation.