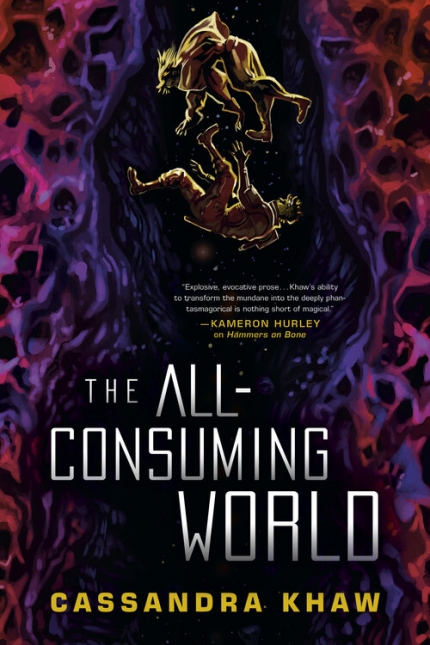 Maya never met a situation she trusted or a person she wouldn’t just as soon kill. She loves to swear and prefers a firefight to a negotiation. Being a clone isn’t what made Maya this way. Rita did it — with a mix of chemicals each time she regrew Maya. Clones emerge fully grown as “osseocartilaginous structure blooms into shrapnel, calcium spalling knifing into new tissue.”

In the process, Rita has enhanced more than just Maya’s desire to cut conversations short with gunfire. Neurological additives mean Maya is devoted to Rita, whose touch leaves Maya “unmoored” but still able to memorize “the vexation of fugitive hairs radiating from Rita’s skull, haloed and holy as decay in the glare of the lamp overhead.”

The other members of Rita’s team, her Dirty Dozen mercenaries, are clones, too, but without the forced devotion. Forty years have passed since the Dirty Dozen worked together. The team broke up when a big job went terribly wrong. Solo, each member scattered throughout the galaxy to hide not only from the authorities but also from the murderous Maya and the manipulative Rita.

The All-Consuming World is biopunk at its most visceral and languorous. The combination manifests throughout the book, like with the corporealization of an artificial intelligence that slowly dissects a body while discussing its provision of information. There are fights galore and many messy deaths, including a suicide in the first chapter:

“‘Fuck you, too.’ Maya blows Ayane a kiss before she crams a gun into her own mouth, sucks in one last breath of shitty reprocessed air, and splatters her brains on the wall.’”

With Maya’s coercive help, Rita is getting the Dirty Dozen back together for one last crime, but none of the team is interested in re-joining the group. Some have even gone so far as to die without making themselves available for cloning. But for those still alive, the pull of old friendships is strong despite past pain and betrayal. The lure of old lovers is even stronger, especially for those who have trauma-bonded. Everyone wants to learn what happened to Elise, the team member whose death led to the Dirty Dozen breaking up in the first place.

The Merchant Mind, a powerful artificial intelligence, has contracted with Rita and what’s left of her team to go to the planet Dimmuborgir for him. Rita, who set up this job, is cagey about what the team will find on Dimmuborgir and why they are going. She’s counting on devotion to pull everyone together.

For the Merchant Mind and the other AIs who run the galaxy, devotion is key. It keeps people in line. The Minds structure society like a religious order and put themselves atop it. Sentient Ageships are the gatekeepers to the domains of the Minds. Information is what the Minds want most. Data is savored “with the eagerness of a connoisseur.” Younger entities like the Surveyor ship, Pimento, provide new information in hopes of being “pivotal in the enumeration of the universe’s truths.”

It’s no secret that the most powerful AIs want to see the end of clones, whom the Minds and others consider to be the continuation of outdated technology. When the remnants of the Dirty Dozen set out on their last job together, the Ageships are after them. So are the Minds.

The All-Consuming World is a mix of fast-paced action and well-crafted observations. The urge to rush through this novel should be resisted so that the slower, more complexly drawn sections can be savored. An easily accessible dictionary is a must when reading, too. While author Cassandra Khaw often finds the perfect descriptive phrase, like “Coelenterate hair” or “Cicatrized patterning” or “the cacology of Ayane’s responses,” it’s not always clear that the exact right word was used until its meaning is checked.

Once the reader trusts Khaw’s use of language, the descriptions are a wonder to behold. The writing is at its best when one member of the Dirty Dozen is admiring another: “The light doesn’t just love her, it obsesses. How else to explain the way it wraps her up in a champagne nimbus so she, for one shining moment, looks like some goddess come to salvage the day.”

But members of the Dirty Dozen aren’t the only ones described so evocatively. The Surveyor ship, Pimento, “incensed beyond easy classification, incorporates physiognomic markers of his dissatisfaction: cragged brow, rucked mouth, and so on and so forth, every pane of artificial flesh committed to comedic volumes of crenellation.”

Without a doubt, Pimento’s reactions are as deeply felt as those of anyone made from flesh, even if that flesh is vat-grown. And The All-Consuming World is a pulsating spectacle of style and a solid addition to the biopunk genre.

The Bone Clocks: A Novel

A teenage runaway is drawn into a mysterious contest between good and evil in this labyrinthine tale.