The Restaurant Critic’s Wife: A Novel

What happens when your spouse’s need to go incognito makes you invisible, too? 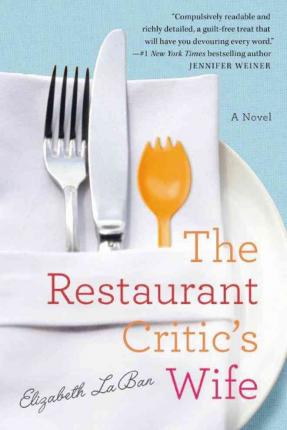 With bookshelves full of titles like The Time Traveler’s Wife, The Aviator’s Wife, The Calligrapher’s Daughter, and The General’s Daughter, a reader might be forgiven for thinking that fictional females were of interest only in relation to their male family members’ professions — no matter how fascinating the protagonist herself ends up being.

Elizabeth LaBan’s titular wife, Lila Soto, is pregnant in Philadelphia and wondering about just that dynamic. Has she subordinated her identity to that of her husband? Their family is new in town, and Sam Soto wants to ensure that his new gig as the city’s leading restaurant critic is everything he ever dreamed. And that means maintaining strict secrecy about his identity.

Since he dines out with Lila, he wants her to fly under the radar, too. So not only will she hold off on going back to work at her high-profile crisis-management job for a prominent hotel chain, but he also wants her to give all their new neighbors the cold shoulder, avoid making any new friends, and stay away from Maureen, Lila’s only friend in town, who happens to be married to a restaurateur.

All this is to make sure that no one who might be remotely connected to the restaurant industry learns who Sam is and what he does.

Not surprisingly, Lila is miserable. She has her sweet 3-year-old daughter for company and soon a newborn boy, but she must snub her neighbors when they drop off housewarming gifts. She sneaks around to meet Maureen and her little girl. Lila longs for the carefree days of her youth, when she traveled around the world and didn’t even have a fixed address, to say nothing of little lives to care for.

Lila loves her husband, whose passion for food is endearing and whose generosity can still astound her. But she can’t stifle her yearnings for more social interaction. Inevitably, she begins to make connections, nearly all of which turn out to be forbidden.

She takes her daughter for playdates at Maureen’s house (where food from the restaurant mysteriously arrives for their lunch, to Lila’s great discomfort). She stumbles into a friendship with a waiter from one of Philadelphia’s premier eateries. She can’t help but rely upon her friendly neighbors as household crisis after crisis emerges, though she never finds an elegant way to ask if any of them owns a restaurant, per Sam’s requirement. She dabbles in her crisis-management work, only to end up in the spotlight.

Each time Sam discovers Lila’s transgressions, he scolds her for not giving him the space and respect he needs. At one point, he tells her, when a gossip columnist writes her up for eating at a restaurant her husband panned, “I’m starting to think that letting you out there is like setting a wild animal free in a city — you just can’t help yourself.” And though Lila replies that she doesn’t need his permission, the reader can’t help but wonder if Sam thinks she does.

The cycle of loneliness, disobedience, deceit, and dismay escalates until sparking the inevitable confrontation between Sam and Lila. Their love, which Lila (mostly) believes in, gets put to the test. And Lila has to ask herself just how much of her identity is now defined by her status as a wife and mother.

That is a question that many women struggle with, even if Sam’s willingness to leave her at hearth and home makes Lila’s dilemma often feel more 1970s than 2010s. How much should one partner sacrifice for another? LaBan, herself married to a restaurant critic, must have suffered some of these quandaries.

The particular constraints of being wedded to a restaurant critic are both interesting and amusing. Sam’s efforts at anonymity might strike a chord with anyone curious about our omnipresent social-media age, and a scene involving a fake mustache and some tomato soup is laugh-out-loud funny. On balance, though, Sam’s near total inability to sympathize with his wife’s loneliness in her stifling lifestyle was too much for this reader. Though he sometimes managed to redeem himself, Sam’s drive for the perfect anonymous review made him a tough character to swallow.

LaBan’s writing, on the other hand, is like a dish of smooth custard — straightforward and a treat to take in. The detailed meal descriptions are likely to spark some hunger pangs, and the spicy and sympathetic Lila makes a perfect meal companion. It’s only too bad that Sam is probably an acquired taste.

Carrie Callaghan’s fiction has appeared in Silk Road, Floodwall, the MacGuffin, the Mulberry Fork Review, and elsewhere. She lives in Maryland with her partner (“The Writer’s Husband”) and their little ones. Follow her on Twitter at @carriecallaghan.