The Butcher's Trail: How the Search for Balkan War Criminals Became the World's Most Successful Manhunt

This well-researched, sobering chronicle "is a necessary and admirable achievement." 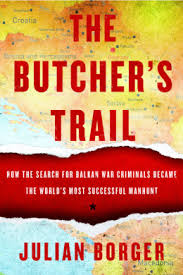 Slovenia, Croatia, Bosnia and Herzegovina, Serbia, Montenegro, Kosovo, Macedonia — these places are not well known to most people on the American continents. The construction from which they came, Yugoslavia, is perhaps more familiar. Such a shame that what we learn about that part of the world, the Balkans, is mostly the saga of ethnic and religious cleansing.

The Butcher’s Trail is a demanding book because of the complexity and foreignness of its subject; it is a difficult book because of the alphabet soup of agencies that need reference and the diacritical markings that hover like shattered nibs over the names of its many, many subjects. Yet it is a necessary and admirable achievement.

The history of the ethnic cleansing that went on in crumbling Yugoslavia and its successor national entities, often below the radar of outsiders, is chronicled here in summary and by implication. That summary prefaces the much more detailed presentation of the consequent attempts to bring justice to the murderers and thus, in small measure, to the victims.

Of course, one man’s war crime is another man’s act of patriotic survivorship. The justifications for ethnic cleansing are pathetic and retch-provoking. And yet, on the lips of the butchers, they sound all too rational and all too human.

Author Julian Borger touches on such matters, but his central subject in The Butcher’s Trail is the chase, or the scores of chases, to apprehend designated war criminals and bring them before a tribunal, in this case the International Criminal Tribunal in the Hague. The ICTY (“Y” for Yugoslavia), a United Nations body, prepared a list of 161 indictees, and various organizations from several nations (mostly) cooperated to hunt them down.

The book is loaded with horror stories; stories of procrastination and obfuscation; stories that are reminiscent of the old Keystone Cops movies; and stories of courage, determination, and ultimate success in bringing many ethnic-cleansing masterminds and functionaries to justice. Slobodan Milošević, Ratko Mladić, and Radovan Karadžić are the actors singled out by Borger from among far too many others as “the three men most responsible for unleashing carnage on the people of the former Yugoslavia.”

For these men and many others, Borger provides vivid and detailed treatments that often begin with their wartime deeds, slide back to sketch their earlier lives, then lead up to their pinnacles of infamy, and finally the consequences of their capture by NATO or others as part of the ICTY operation.

The vignettes in this book, some quite extended, are constantly interesting and brimming with tension. An example is the story of how Croatia’s desire to join the European Union depended on its compliance with the ICTY. This made the capture of its chief villain, General Ante Gotovina, imperative. And yet a Croatian official was fired for carrying out the ostensible government policy of cooperating with indictments from the Hague.

Unfortunately, such events where not unusual.

A prison in Scheveningen, near the Hague, was the temporary or longer-term home for many charged with (and often enough convicted of) war crimes committed in Yugoslavia or in the new nations — based narrowly on ethnicity — that emerged from Yugoslavia’s wreckage.

Borger’s presentation of facts, analysis, and assessment is not only about the men involved, though. He also informs us that while only one of the 161 names on the ICTY list was that of a woman, the two most effective ITCY officials were the two chief prosecutors — Louise Arbour and Carla Del Ponte — who served in that job sequentially.

When western governments refused to cooperate with the ITCY’s United Nations mandate, Arbour made plans to form her own SWAT team. She also instituted the fruitful practice of serving sealed indictments. Del Ponte was equally effective, using other strategies to meet a changing situation. Together, claims Borger, these women “made the Hague Tribunal a gatekeeper.”

Borger’s grand success with this study comes first from his dogged investigative journalism. Much of “what’s new” in his narrative depends on his extensive interviews with Special Forces soldiers, a wide range of war-crimes investigators, and intelligence officials. That is, he was able to get on the record the information and experiences of participants who in many cases had revealed little until he came into their lives.

Important, as well, is Borger’s ability to make a suspenseful and richly detailed narrative that synthesizes his abundant sources and insights into a book that is clear and compelling. He provides extensive notes, a bibliography, a chronology, and a much-needed list deciphering abbreviations.

Is his the last word on the subject? Probably not. But it should hold up for quite a while.

A delightfully subversive — and subversively delightful — look at the world of kids’ books.