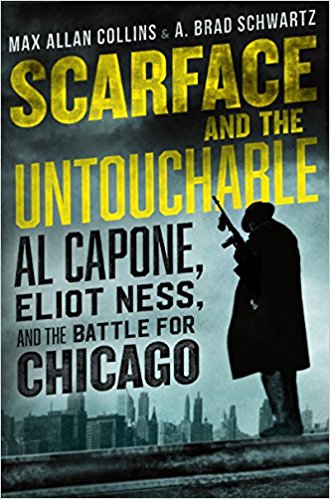 It’s an archetypal showdown: the virtuous outsider facing down a dark antagonist. The Earp boys throw down against the Clantons. Chief Brody goes eye-to-eye with Jaws. Woodward and Bernstein stand up to the Nixon bunch.

This same fateful aura has attached to Eliot Ness’ much-celebrated clash with Al Capone. Thanks to the incessant output of their journalist contemporaries — plus the movie and TV aggrandizements of both men — Capone has become the embodiment of gangland evil, and Ness has emerged as Scarface’s primary challenger: stalwart, righteous, and incorruptible.

They’re a dream team of antagonists in the popular imagination, going mano a mano for the future of America’s Second City. This is surely fertile ground for a dual biography.

Authors Max Allan Collins and A. Brad Schwartz enthusiastically tackle this opportunity in Scarface and the Untouchable, and literally make the most of it, turning out a massive tome bristling with footnotes and weighty as a pair of cement shoes. Fans of bibliographic notes and citations will find 150 pages of them here, including the index.

For the general reader, septuagenarian author Collins is certainly the more familiar of the two collaborators. He’s produced several dozen conventional as well as graphic novels, screenplays, and movie novelizations. By reason of output alone, you could call him the Joyce Carol Oates of crime-related fiction in all its forms: shamus sagas, righteous-hitman adventures, whodunits, even comic strips. (Collins took over the Dick Tracy strip from original author Chester Gould, who, it’s said, had modeled his crime-fighting hero on Eliot Ness.)

In this book, Collins has teamed with historian A. Brad Schwartz, apparently as indefatigable a researcher in assembling the facts of this saga as Ness’ stalwart band was in digging out the incriminating omissions in Big Al’s elusive account books.

Scarface and the Untouchable is bulky because it is thorough and detailed — almost devotionally so. It’s sure to become a valuable resource for historians of Prohibition-era America, amateur and professional alike. At the same time, it’s an undertaking by enthusiasts for enthusiasts and not an easy read, owing largely to its sheer density of reportage — often week-by-week, sometimes day-to-day — as the interlocking halves of its saga take shape.

Make no mistake, Collins and Schwartz certainly produce vivid stretches of narrative, notably as they chronicle the lawless milieu of Prohibition-era Chicago and the blasé corruptibility of civic authority as the nation slides into the Depression.

They reveal, in compelling detail, how Ness championed the merits of scientific criminology, shepherding the introduction, for instance, of ballistic analysis in cases involving firearms. And this reader was captivated by the many scenes where the Ness team, axes in hand, smashes thousands upon thousands of kegs of illegal brew, but never come close to directly implicating the smiling, ebullient Capone in its production and sale.

The affable Capone, well before ‘30s Hollywood weighs in with its own variations on the type, skillfully portrays himself as a man of the people, a philanthropist, insulating himself from the bloody violence unleashed by his minions to maintain the gang’s grip on millions in illegal profits.

Capone’s rule ultimately sputters to a stop, but not in a blind alley echoing with machine-gun fire. Big Al goes down when the G-men, relying more on green eyeshades and wiretaps than tommy guns, get the goods, somewhat tentatively, on his tax-evading skullduggery.

And so Al Capone is sent off to prison, and Eliot Ness is among the righteous cadre escorting him to the train that will take him there. The authors handle this moment somewhat offhandedly, but there’s a telling factoid here that lets a bit of the air out of their “fateful showdown” premise, at least as it figures in a dual biography.

What takes place on the train platform is the only documented occasion when Ness and Capone actually encounter each other face-to-face.

After this moment, much of the momentum drains out of this book as it steadfastly follows through on its promise, shadowing both men through the rest of their lives. Capone, out of stir by 1939, dies quietly in Florida eight years later, in the advanced stages of syphilis and, in the words of one crony, “nutty as a cuckoo.”

Eliot Ness, only 29 when Capone goes behind bars, lives a relatively uneventful life out of law enforcement. He dies of a heart attack in 1957, by then on his third wife and reputedly struggling with alcohol. He never sees the release of his Untouchables memoir, nor the subsequent TV series that was to carry his name into our times.