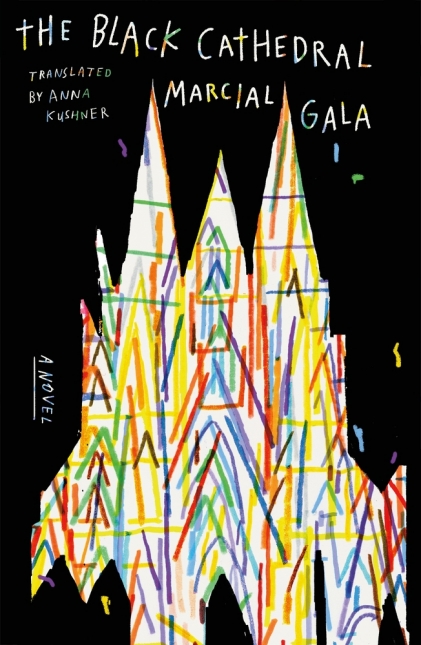 Marcial Gala’s The Black Cathedral is a novel deeply immersed in Cuban culture and history. It is set in Cienfuegos (which, ironically enough, means “hundred fires” in Spanish) on the southern coast of Cuba and was written in Cuban Spanish. The translator, Anna Kushner, is the daughter of Cuban exiles. The book is the underside of the island nation writ large.

The story, set in the first decade of the 21st century, centers on the Stuart family and the church, referred to as “the cathedral,” that Arturo Stuart, the father, begins building with the cooperation of the people who live in the Punta Gotica quarter of Cienfuegos.

Why the Stuarts have an Anglo-Saxon name is never explained. Nor does the reader learn why the family, obviously better off financially than the other inhabitants of Punta Gotica, has moved to Cienfuegos from Camagüey in the central part of the island. They are erratically religious, starting each conversation with “Blessings.”

The family consists of five members: Arturo; Carmen, the mother; David King, the elder son (known as Cricket), who, as a child, is beaten by his father, but as an adult, grows to six feet, five inches and is endowed with a phenomenal sexual appendage; the younger son, Samuel Prince (known as Jelly); and the daughter, Johannes. By the end, all but Johannes, and perhaps Carmen (one character says she was killed by her sons; another says she survived), are dead.

The building of the cathedral progresses throughout the roughly eight years covered by the book. Only at the conclusion of the story does it become clear that the church will never be finished. It gradually falls into ruin and turns black, becoming a symbol of the degradation of the black community that built it.

Almost all the inhabitants of Punta Gotica, including the Stuarts, are black. They distinguish themselves by how black they are. Most are mulatos, of mixed race. Women with a light complexion are valued over those who are dark. The few Caucasians are the most admired.

The reader learns the story of Punta Gotica from spoken narratives. The statements run from a single paragraph to several pages. They are not chronological; we are fed the story in bits and pieces.

We hear from 24 characters who talk about the Stuarts and each other. Among the most prominent are Yohandris Carlos Fernández Ramírez, known as Guts, who eventually escapes to Spain; Ricardo Mora Gutiérrez, called Gringo, a murderer who ends up on death row; and Berta, a local woman who witnesses the entire story. Some characters continue to speak after death. Because of the poverty and ugliness, as many as can leave Cuba for other countries. They end up in the U.S., Spain, and Italy.

No narratives come from the principal characters, the Stuarts, with one exception: At the very end of the book, we hear from Samuel Prince, but his narrative is almost entirely a quote from what he imagines others will say to him.

The Black Cathedral is not easy to understand. The telling of the story in fragments from multiple, occasionally contradictory viewpoints requires the reader to reconstruct the tale from incomplete, conflicting details. This reader also had trouble remembering which character was which.

And the language is a challenge. Words from Cuban Spanish (cubano or cubaño) are sprinkled throughout the text, most often because there is no exact English equivalent to use instead. Spanish is a language I have studied, but I often found that the meaning of an interspersed word was different from its standard definition. And a great many do not appear in Spanish at all.

When my Spanish-English dictionary failed, I searched the internet. I learned that Yuma, for example, is cubañol for the United States. Asere is a word introduced to Cuba by African slaves. It means good friend or buddy. Pinga, which literally means penis, is apparently used here to mean homosexual (maricón also appears) or perhaps transsexual. There are even words from Yoruba, a Nigerian language.

Every fictional device imaginable is employed. The aberrations chronicled in detail include but are not limited to murder, cannibalism, and sexual intercourse with a corpse. Ghosts talk to and guide characters in the pursuit of treasure. Characters move casually from one sexual partner to another. Oral sex is commonplace.

As a result, I can recommend The Black Cathedral to those willing to face a society mired in poverty and excess. Its readers need to be willing to piece together the story from incomplete clues. A knowledge of Spanish will help. This is not an easy read.

But to the degree that Marcial Gala has accurately depicted the culture of Punta Gotica, the effort required to struggle through the book is worthwhile. I came away from The Black Cathedral with a deepened understanding of Cuba and the extent to which poverty can undermine decency — a lesson well worth learning.

Tom Glenn was an intelligence operative for the U.S. government for 35 years. A linguist in seven languages, he has four novels and 17 short stories in print, with two more books due out in 2020.