I’m Glad About You: A Novel 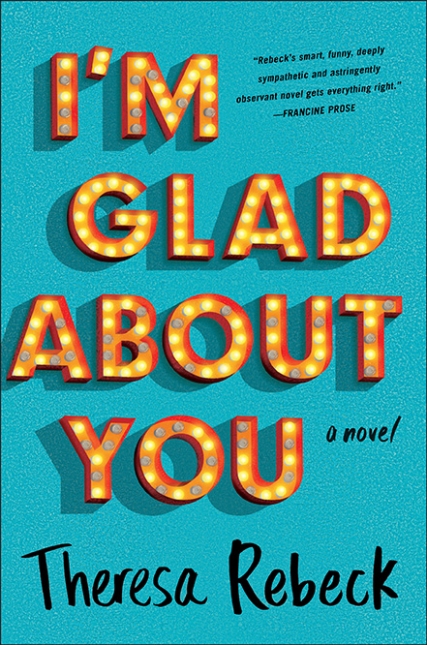 In romantic comedies, two people meet, fall in love, hijinks ensue, and the lovers end up together, gratefully and magically in bliss.

Real life doesn’t work that way. Sometimes you can be in love and, through no one’s fault, your paths diverge. Age, jobs, goals, family, and personal aspirations all take a toll.

In her debut novel, I’m Glad About You, Theresa Rebeck writes about two high-school students who fall in love and stay together for six years. Alison, smart, beautiful, ambitious, wants to be an actress and moves to New York City. Kyle, idealistic, thoughtful, spiritual, yearns to go to medical school and heal kids in the far reaches of the world. After Alison leaves for New York and the couple breaks up for the final time, Kyle marries hastily and, very soon, regretfully. Yet despite their split, fate (and some finagling from certain family members) brings the pair into each other’s sphere again.

At one ill-conceived dinner party, Kyle and Alison argue in front of the other guests. The light banter reveals a hard truth — they had lost the idealism of their youth. “‘I just thought you had bigger dreams,’ Kyle said…‘I thought you did too.’ Why had they given up everything for so little? And if they were going to give up their dreams anyway why not give them up for each other.”

I won’t ruin the surprise and tell you whether the two get back together. Honestly, you’ll be okay either way. The story of lost love is whimsical and funny and sometimes cringe-worthy when readers recognize themselves in the near misses.

But what really propels this story is the author’s expositions. In 2011, Rebeck was named one of the 150 Fearless Women in the World by Newsweek. Fearlessly, she steals the show with her depictions of modern life. The reading becomes so much richer and thought-provoking with her riffs on everything from religion to parenthood to Hollywood.

Sometimes her comments are so spot-on, it’s uncomfortable. For example, at his pediatric practice, Kyle is asked to give a stressed-out mother antibiotics for her kid, who has been sick (and annoying) for days. Kyle knows the drugs will do nothing to cure the child’s viral infection — and knows their overuse can lead to antibiotic resistance — but the mother is rude and insistent and the doctor is harried and impatient. Kyle searches for a reason to write the prescription. Had the child been pulling at his ears? Had he been running a fever for days? It’s a harsh, honest take on a scene that plays out between overworked doctors and exhausted parents every day.

Rebeck also tackles the sexism of Hollywood with what I can only assume is absolute truth and folly, as she was a creator of “Smash,” an NBC show set in the world of Broadway. Alison’s big break occurs when she is cast in the newest blockbuster, a seminal achievement except that she also happens to be sleeping with the director.

The film is eventually torn apart by egos and bad decisions, but Alison goes to work every day, striving to be the nice one and make a good movie. She refuses to believe sex had anything to do with casting. At one point, the director brings two guys over to rehearse the love scenes, and Alison knows she has been set up to be in a scene more real than rehearsal.

How did she get here? One step at a time.

Overall, I’m Glad About You is a great read not for the love story and its will-they-or-won’t-they tension, but because of its sharp eye. Read it for an analysis that may make you uncomfortable about your life and force you to dust off those dreams of long ago.

JR Scrafford is a senior review editor at the Washington Independent Review of Books.

A literary high-wire act with a powerful meditation on music, musical history and music in history at its core.