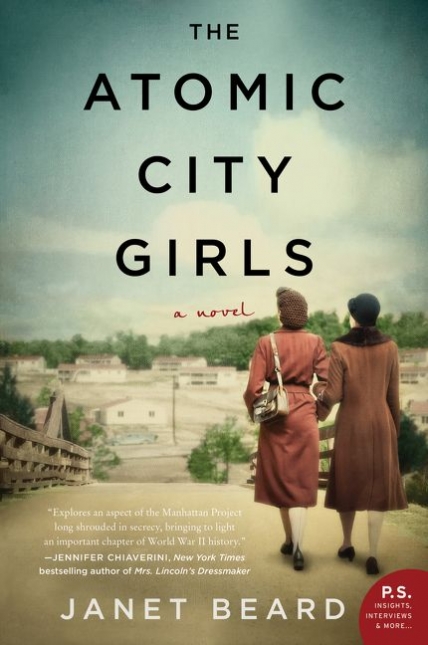 In the first chapter of Janet Beard’s The Atomic City Girls, there is a photograph of a billboard reading, “What you see here, what you do here, what you hear here when you leave here, let it stay here.”

Above the message, Uncle Sam sets aside his hat and rolls up his sleeves. He looks more like a farmhand than the icon of patriotism we are accustomed to, yet both his haggard appearance and the message of silence represent the mood and purpose of what Beard’s novel tries to explore, but misses almost completely.

The book ambitiously chronicles a World War II Manhattan Project research facility in Oak Ridge, Tennessee, through multiple points of view: Cici, a vapid, often cruel husband-hunter and bombshell; Joe Brewer, an African-American construction worker who sends his pay home to Alabama to feed his wife and children; Dr. Sam Cantor, a Jewish physicist from New York City who drinks too much; and June Walker, the daughter of impoverished farmers.

Sweet, naive June is the center of the story, and the other points of view orbit around her. Oak Ridge is at one moment full of quintessentially American hope and prosperity, and the next facing the ugly truths of poverty and the death, despair, and dread that accompany life during wartime.

The plot sluggishly moves from November 1942 to 1945, just after the defeat of the Japanese. The main thread is the love story between June and Sam. Despite their clear educational, religious, and regional differences, the couple becomes increasingly involved. Then Sam gets June a job as his secretary.

At first, June’s attention relieves some of Sam’s alcoholism, but the relationship disintegrates as the bomb gets closer to completion and Sam’s factory-made emotional constipation and self-medication with booze obstruct any real hope at intimacy.

The Atomic City Girls often struggles with emphasizing the important over the mundane. It gives an entire chapter over to describing a trip home for a Christmas celebration, and several pages to a loose kitchen in the house, but very little space to addressing crucial components of the story, such as who June or Sam are as unique characters.

The dialogue is often predictable and lacks the true sound of speech: The excess of hellos and goodbyes could have been replaced with significant conversations.

That sense of cheap filler extended to the characters. In one instance, June sees a dress in a shop window. Instead of describing why she wants it, the book simply says she has never had a store-bought dress before.

In a novel, the wreckage is the interesting part, and I couldn’t help but wonder what would have happened if the author had slowed down and enjoyed the damage. Perhaps the paper-doll characters would’ve finally freed themselves from the tangle of clichés if they had grappled with the truth of the bomb and the personal grief of war. The novel only hints at this as Sam drinks when he thinks about the bomb, and June mourns her first love, who died in France.

In one short passage, Sam assumes he has lost his Jewish relatives in Germany when he no longer hears from them. The readers learn Sam’s relatives were caught behind enemy lines, yet are never given details about those now gone. How can we empathize when we can’t see the quirks of those we’re supposed to miss?

The true joy of historical fiction is the details of place and time. I want to taste a good historical novel, to feel the fabric of the clothes, to hear the crackle of old radios. As a Tennessee native, filmmaker, and graduate of the New School’s MFA program, Beard had the tools to show us her state and the dramatic transformation of Oak Ridge from the backwoods of Appalachia to a bustling war machine.

Beard includes photographs of wartime Oak Ridge in each chapter, with images of dance halls, rejoicing workers as the war draws down, and many other things. Beyond those nice touches, though, the historical details are few, largely sticking to the basics: Jim Crow, moonshine, mild misogyny, and so on. The novel makes passing references to swing music and colorful dresses, where describing the Andrews Sisters and the fashion of the period would have been far more effective. Outside geography and the occasional mention of weather, Oak Ridge itself is not given much sense of place or character.

The novel, does, however, find some urgency once the first bomb drops on Japan. After it hits, the characters get at least a scrap of the complexity they had been missing for the previous 300 pages. June starts to truly grasp why it is that Sam’s work on the bomb has been destroying him for so long as the reality of its magnitude comes into focus.

As readers, we can finally feel Sam’s alienation as the crowds around him celebrate while he struggles with the reality that he has played a part in killing thousands in one blinding instant. June, Joe, and Sam also end up in trouble after their superiors learn June knew about the bomb before it was dropped.

This gives me hope for Beard. Maybe her next work will have the urgency, maturity, and detail that The Atomic City Girls struggles to find.

Gretchen Lida is an essayist and an equestrian. Her work has appeared in the Washington Post, Brevity, the Rumpus, the Los Angeles Review of Books, and many other publications. She teaches composition in Illinois, lives in Wisconsin, sometimes lives on Nantucket, and is a Colorado native. She is working on her first collection, Beware the Horse Girls: Essays for the Awkward Equestrian.