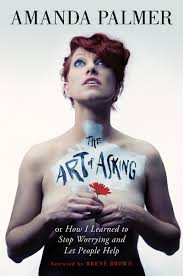 Will you marry me? Can I have a raise? Will you read my book? Nerves, sweaty palms, feelings of insecurity: It can be hard to ask for something you want. Even rock stars, people whose very job description is our society’s definition of awesome, have trouble asking.

And so Amanda Palmer, an indie piano/ukulele/cabaret-punk star, has stepped off the stage to explain, in The Art of Asking, just how she was able to become a pro at asking — for money, for a tampon, for a place to spend the night, for a hug. The memoir is an expansion of a moment on stage, when she gave a TED talk designed to help empower her fellow artists. It’s okay, she tells us, to ask. As long as you do it right.

Palmer’s apprenticeship in asking came in perhaps the most difficult venue: the street. For years, she dressed in a frilly bridal gown and stood on a milk carton with her face painted white and flowers in her hand. She was a living statue, immobile until someone dropped money (or anything) into the hat at her feet. Then she would come to life, lock eyes with her donor, and slowly, gently hand that person a flower.

It was, she writes, like falling in love. “Thirty little secret love affairs with passersby in just under seventy minutes,” and it’s this profundity of feeling that makes Palmer comfortable with the fact of asking. For she is asking with gratitude, not shame or condescension, and doing so acknowledges that both the giver and the receiver have the power to help one another.

Her life as the Eight-Foot Bride, a beatific and loving blank canvas, gave Palmer permission to push herself forward as the artist she really was, a loud, bizarrely creative singer-songwriter. Empowering herself to embrace that identity was more difficult than standing, frozen, on a milk crate while most of the world ignored her. Because, after all, who gets to be an artist? Who has permission to ask the world to listen to their lives, refracted and blended into something new?

Everyone who dares to, Palmer argues. “When you’re an artist, nobody ever tells you or hits you with the magic wand of legitimacy. You have to hit your own head with your own handmade wand. And you feel stupid doing it.”

And she does feel stupid doing it, she confesses. Palmer battles what she calls the “Fraud Police,” the inner voice that tells her she’s not good enough. Or that she should, in the words of a heckler, get a job. A real job, that is.

She tilts with her demons even when she achieves indie stardom, first as part of punk-cabaret duo the Dresden Dolls, and then on her own. Even when she falls in love with and marries fantasy-author superstar Neil Gaiman. That magic wand doesn’t always work.

But the gift of her music rebounds as the gift of her fans’ appreciation. Palmer builds an email list and then a massive Twitter following based on the idea of exchange — with gratitude, human connection, a love of quirk, and an appreciation for human artistry circulating between herself and her fans.

In 2012, after an unpleasant experience with a music label to which she was poorly matched, Palmer decided to crowdfund a recording. She raised $1.2 million, the most any musician has raised on Kickstarter.

But the success brought a bitter backlash and accusations that she was milking her fans. The vitriol worsened when some volunteer musicians scheduled to perform at stops on her tour — in exchange for free tickets and a chance to pass the hat — took to the Internet to argue they were being exploited. Palmer was, she writes, devastated. She had viewed both endeavors as fair exchanges, the gifts circulating from giver to receiver, from fan to artist, and back again.

She recalibrated, paid the musicians, and mourned.

Palmer uses her artistic journey, her romance with Gaiman, and her lifelong friendship with an older man to depict her personal evolution and her thesis. It was moving (I cried, twice), but this argument by experience doesn’t always work, and the book left me wishing for more depth.

Who does, after all, get to be an artist? Nearly every human has artistic inclinations of some form, but we still need accountants. Can we all dub ourselves poets or musicians? And just how deep can the transitory human connections — essential currency in this exchange — from a living statue or a rock star on stage be? How much can one woman really give? Palmer admits she struggles with these questions, but a discussion about just where those emotional limits might lie would have given her assertions more credibility.

The book reads very much like how I imagine a conversation with Palmer to be — replete with expletives, ALL CAPS, and hugs in the form of quick anecdotes. So maybe it’s unfair that I wanted the book to dig deeper and answer its questions more explicitly. Perhaps that’s not how a conversation with Amanda Palmer would unfold.

But I found myself wishing that, after reading this book, I could watch an experienced excavator of human emotion and motivation such as writer Leslie Jamison sit down and trade ideas with the punk diva. So, in the spirit of the book, that’s what I’m asking for. Hey, I’ll bake the cookies.