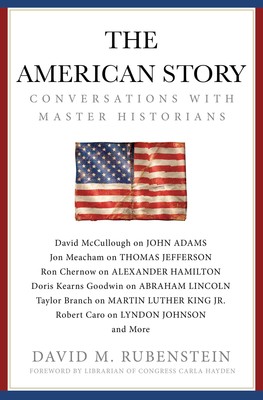 For those who love history and enjoy biography, David M. Rubenstein has delivered a masterstroke with The American Story, in which he presents his interviews with authors of notable biographies. Among them are David McCullough on John Adams; Ron Chernow on Alexander Hamilton; Taylor Branch on Martin Luther King Jr.; Walter Isaacson on Benjamin Franklin; Robert Caro on Lyndon Johnson; and Doris Kearns Goodwin on Abraham Lincoln.

In total, The American Story is a delectable smorgasbord of U.S. history, covering 39 books discussed by 15 authors, some of whom have written more than one biography.

The American Story grew from an idea Rubenstein proposed in 2013 to present a dinner series for members of Congress entitled “Congressional Dialogues,” in which he would interview acclaimed historians in the gilded setting of the Library of Congress.

He said his purpose was to educate public servants, “to provide the members with more information about the great leaders and events in our country’s past, with the hope that, in exercising their various responsibilities, our senators and representatives would be more knowledgeable about history and what it can teach us about future challenges.”

He also hoped that bringing the members together in a nonpartisan setting might reduce the rancor in Washington. Six years later, he admits the jury is out on the former and that absolutely no traction has been gained on the latter.

Rubenstein, who made his fortune ($3.6 billion) in private equity as co-founder of the Carlyle Group, styles himself as a “patriotic philanthropist,” having purchased the last privately owned original Magna Carta for $21.3 million and then loaning it to the National Archives.

In addition, he has given $7.5 million to repair the Washington Monument; $13.5 million to the National Archives for a new gallery; $20 million to the Thomas Jefferson Foundation; and $10 million to Montpelier to renovate James Madison’s home. So, when the “patriotic philanthropist” asked to host his own interviews at the Library of Congress, the answer was, quite sensibly, yes.

Yet Rubenstein brings more than his b-for-boy-billions to this book. He has delved deeply into American history, having read at least one biography of each president and “every single biography” about John F. Kennedy, the commander-in-chief with whom he feels the greatest connection.

He has donated millions to the John F. Kennedy Presidential Library and Museum in Boston, the Kennedy School of Government at Harvard, and the John F. Kennedy Center for the Performing Arts in Washington, DC, where he serves as chairman of the board of trustees. He recently contributed $50 million for the Kennedy Center’s REACH expansion, upon which his name is chiseled in marble.

As much as Rubenstein admires our 35th president, however, his interview with biographer Richard Reeves (President Kennedy: Profile of Power) shows some of the dark side of JFK’s reign, including the assassination of Rafael Trujillo, the dictator of the Dominican Republic, and the attempted assassination of Fidel Castro.

Some readers will be startled to learn that JFK knew in advance about the Berlin Wall (“for which he was practically a co-contractor,” says Reeves) and had, in effect, consented to building it to protect the small U.S. force of 15,000 soldiers in West Germany from the hundreds of thousands of Russian soldiers on the eastern side.

The American Story shows almost every president to have had a flaw that scarred his legacy: FDR turned away Jewish refugees, sending them back to sure death under Hitler; JFK misfired on the Bay of Pigs; Richard Nixon resigned over Watergate; Vietnam doomed Lyndon Johnson; and, with the exception of John Adams, all the Founding Fathers owned slaves. Yet, as Walter Isaacson put it so well, “The Founders were the best team ever fielded.”

In mining nuggets of history, Jean Edward Smith (Eisenhower in War and Peace) reveals that D-Day might have failed had Hitler not been sleeping. His best Panzer tank troops were available to repel the invading Allies, but only he could give the order to use them, and no one dared wake the Führer during the initial hours of the landing. By the time he woke up, the Normandy beachheads had been secured.

Did the Allies know Hitler had orders not to be disturbed while sleeping? Or was it a matter of the great good luck that Smith said accompanied Eisenhower throughout his life?

Early in his career, Ike was almost court-martialed for claiming his son on his housing allowance for $250 (valued at $3,000 in 2017) even though his son was not living with him. Gen. John J. Pershing got the charge reduced to a letter of reprimand, and Eisenhower soared to a glorious career as a five-star general.

The Q&A format of this book is ingenious. Rubenstein, who’s mastered his subject matter, asks informed questions that stimulate impressive responses, and the “patriotic philanthropist” is not above probing into the personal and provocative:

About Benjamin Franklin: “He seemed to have a lot of girl friends.”

About Alexander Hamilton: “He had a bit of an amorous reputation. In fact, what did Martha Washington call her tomcat?”

About Dwight Eisenhower: “He was the only [WWII] general who may have had [an affair with] his ‘driver.’ Is that right?”

About Ronald Reagan: “Did he dye his hair?”

Rubenstein’s most engaging interview, with U.S. Supreme Court chief justice John G. Roberts Jr., comes at the end of the book. Roberts studied history as an undergrad at Harvard with hopes to make it his career, but then changed his mind.

Rubenstein, also a lawyer, responds: “In the first year of law school — really in the first month or two — you realize certain people have the ability to quickly do legal reasoning. They have the knack of it, and some people don’t. You must have realized that it wasn’t as hard as you had thought it would be.”

The American Story is a creative concept that delivers delicious bite-size bits of American history to those who haven’t had the time or inclination to read widely. I devoured every page with immense pleasure.

Kitty Kelley is the author of seven biographies of influential people and families, including New York Times bestsellers Jackie Oh!, Nancy Reagan, and The Family: The Real Story Behind the Bush Dynasty. She is also the author of Capturing Camelot: Stanley Tretick’s Iconic Images of the Kennedys. In 1988, People magazine published Kelley’s story detailing President Kennedy’s affair with a woman who carried his messages to her other lover, mobster Sam Giancana. Kelley serves on the boards of the Independent and Reading Is Fundamental.