A Thousand Miles to Freedom: My Escape from North Korea

A gripping glimpse into the horrors of life under the Kim regime and the dangers facing those who flee. 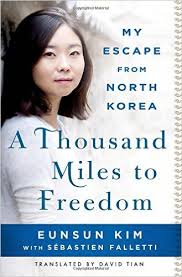 So notorious is North Korea’s dynastic Kim regime that even the American public, famous for its insularity and ignorance of international affairs, knows about Il-sung, Jong-il, and Jong-un, making them the butt of numerous memes, Hollywood movies, and snarky websites that score high in LOLs.

But when the United Nations Human Rights Council issued its 2014 report on the Democratic People’s Republic of Korea, aka North Korea, the Kims didn’t seem so funny anymore. Laid out for all the world to see were the many criminal methods the North Korean government has used — including, but not limited to, starvation, torture, arbitrary arrest, prison camps, severe suppression of freedom of expression and movement, and forced disappearances — to isolate and control its people.

To quote the report, “The gravity, scale and nature of these violations reveal a State that does not have any parallel in the contemporary world.” The council concluded that these “systematic, widespread and gross human rights violations…constitute crimes against humanity.”

For a textbook case of these crimes, one need look no further than A Thousand Miles to Freedom, the plainly written yet harrowing story of Eunsun Kim (a pseudonym used to protect the author’s relatives left behind in the D.P.R.K.) that was first published in France.

The story starts in 1997, when 11-year-old Eunsun, on the brink of starving to death, waits for her mother and sister to return from a desperate journey to find food. North Korea is in the midst of the “Arduous March,” a nationwide famine in which up to 3 million people died (the true number will never be known; what happens in North Korea stays in North Korea), the author’s father and grandparents among them.

Her mother and sister return empty-handed. The next day, Eunsun’s mother “crossed the point of no return.” Committing an act that could have her thrown into a labor camp, or worse, she takes down the household portraits of Kim Il-sung and Kim Jong-il, “holy objects” that are given pride of place in every home, classroom, institution, and workplace, and sells the frames for food. A short time later, she makes the brave and terrifying decision to flee with her daughters to China.

After several failed attempts, during which time they are homeless, cutting down trees to sell for firewood in order to eat and stealing food when necessary, they finally make it into China by crossing the Tumen River, which forms the easternmost border between the two countries and is a popular escape route in the winter when it is frozen over.

But China, while not North Korea, is not freedom, either. China returns all North Korean escapees, making them extremely vulnerable to exploitation and abuse. Eunsun’s mother, like so many other North Korean women, falls victim to human trafficking and is sold to a rough, illiterate Chinese peasant who wants a son so that he might inherit his parents’ farm.

She and her daughters are treated like slaves by the “husband” and his family. Even when Eunsun’s mother finally gives birth to a boy, their situation does not improve. But Eunsun’s mother is powerless, with no money and no recourse to the authorities, and has no choice but to endure.

Eventually, Eunsun, her mother, and her sister are captured by the police and deported back to North Korea, where they undergo interrogations, forced labor, and brainwashing sessions. Through luck and a drop of human kindness, they manage to escape, and once again flee to China. Bit by bit, these hardy women earn money and make a life for themselves, but the threat of being sent back always hangs over them.

After two years, Eunsun and her mother decide to flee to South Korea. To do this, they must leave China for a country where the local government doesn’t prevent North Korean asylum-seekers from gaining access to the South Korean embassy, as China does. Putting their fates in the hands of human smugglers, they travel to Mongolia. There, they are housed with a number of other North Korean refugees, interrogated by South Korean officials to make sure they aren’t spies, and finally put on a flight to South Korea.

In Seoul, the author and her mother embark on their new lives of freedom. Eunsun recounts her struggle to integrate into society and the successes she has achieved since then, including a scholarship to study at an American university. (After the whirling metropolis of Seoul, she finds the Midwestern college town to be disappointing, “like a ghost town.”)

The book is simplistically written, reading like a diary of a teenage girl, which it essentially is. However, it is a valuable document of the human rights crimes of the Kim regime, an eye-opening glimpse into the everyday life of North Koreans, and a powerful testament to the tenacity of the human will.

For all that Eunsun has been through, she faces her future with optimism, vigor, and enthusiasm. She tells her story because silence is defeat; she tells it so that, one day, she and her compatriots will have the last laugh.

Alice Stephens writes a regular column for the Independent, Alice in Wordland. Be a pioneer and follow her on twitter at @AliceKSStephens.

A sister strives to correct her brother’s story, but finds you can never define the whole truth for someone.