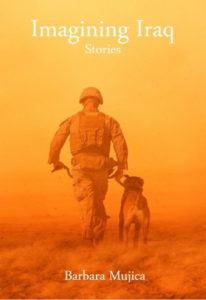 Like a soldier who packs a rucksack with no wasted space, Bárbara Mujica packs a lot of story into a few pages. She brings only essentials into Imagining Iraq: Stories. Mujica narrates from the point of view of a mother whose son is a Marine in Iraq. Her point-of-view character, Jacqueline Montez, also rents rooms to veterans. Though Jacqueline’s son hesitates to disclose much about the war, she tries to understand it better through stories from her tenants.

The themes — violence and fear, hard moral choices, veteran suicide — will sound familiar to readers of war literature. Imagining Iraq brings to mind books such as Redeployment by Phil Klay or The Things They Carried by Tim O’Brien. However, Mujica brings a fresh perspective, writing as a mother and a mentor to those seared by war. Her story “Upside Down” opens with these words:

“The day my son told me he was deploying to Iraq, my world turned upside down. The dust cloth fell from my hand. The clock stopped ticking, specks of dirt hovered midair, and the sparrow on the sill morphed into a plaster statuette. I remember that the room started to spin, and the ceiling fixtures were suddenly where the carpet should have been. I felt nauseous. I put my hand to my mouth.”

Certain stories bring an immigrant perspective. “The Call” is perhaps the most gripping in the collection. It opens with a mother’s dread of learning her son has been killed or injured. Then we learn that the mother, Cándida López, came to the United States as a refugee from El Salvador. Cándida was raped by guerrillas who also attacked and killed her daughter. After 9/11, her son joins the Marines in hopes of obtaining citizenship for himself and his mother.

In “Who the Hell is Rosie Méndez?” an immigrant woman brutalized by gang members finds her strength in the Army. By the time a senior NCO tries to assault her, she knows how to fight back. Both these stories illustrate the struggles of newcomers to the United States: What did they face before they got here?

Other pieces relate the consequences of each decision and each random turn of events in war. In “Interrogating Calla,” an officer chooses to release a beguiling Iraqi woman picked up for questioning — and pays with his life. In “Captain O’Reilly and the Professor,” a veteran in medical school faces a pacifist professor in an ethics seminar. The professor appears to be a sanctimonious leftist with knee-jerk hostility toward the military, until we learn his brother took his own life after participating in the My Lai massacre.

Mujica knows whereof she speaks: The collection is dedicated to her son, Captain Mauro Mujica-Parodi, and to the Georgetown University Student Veterans Association. She is a professor emerita of Spanish literature at Georgetown, and she helped create the student-veterans group.

In military circles, one often hears of a line from John Milton: “They also serve who only stand and wait.” Though Milton wasn’t referring to military families, the reference has come to mean respect for those waiting for a servicemember’s safe return. An old truism holds that the military’s toughest job is unpaid: the parent or spouse of someone in harm’s way. In the book’s epilogue, the author describes her swirl of emotion:

“As the president’s justifications for going to war started to unravel, I kept my rage to myself. How could I admit that I was conflicted about this enterprise when my son was heading for Iraq? As one Army mother told me, ‘You reach a point when you can no longer dwell on the politics of it. All you want is for your kid to come home safe.’”

As a veteran, I always knew that each time I volunteered for a deployment, I was also volunteering my wife and parents. With some guilt, I recognized I was asking them to do the hardest job. Through her stories, Bárbara Mujica becomes an eloquent spokeswoman for those who did that job. Veterans and civilians alike owe her a sharp salute.

Tom Young is the author of several military-related novels, including the World War II novel Silver Wings, Iron Cross. His narrative, “Night Flight to Baghdad,” appeared in the anthology Operation Homecoming: Iraq, Afghanistan, and the Home Front, in the Words of U.S. Troops and Their Families. Young spent more than 20 years with the Air National Guard. He lives in Alexandria, VA.

The Asset: A Thriller

This largely implausible commercial-aviation tale comes in for a rough landing.