The Advocate’s Daughter: A Thriller

A murder mystery unfolds amid the power and intrigue of Washington, DC 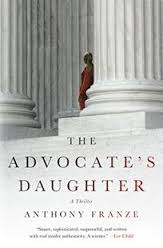 The most interesting character in Anthony Franze’s first novel, The Advocate’s Daughter, is Abby Serrat, the titular character. Unfortunately, we only get to know Abby through her family’s recollections, since in the opening pages she is brutally assaulted and murdered, her body stuffed among the shelves in the library of the Supreme Court.

As a law-school class assignment, Abby was conducting research on potential nominees for a vacancy on the Supreme Court. (Could Franze and his publisher have better timing?) It so happens that her father, recently employed by the Office of the Solicitor General and now in private practice, is on the president’s shortlist of nominees.

Abby’s father, Sean Serrat, is a successful lawyer with a troubled past. As a teenage military brat in Japan, he got into some serious trouble, which his father, as commanding general of the base, made disappear. Sean swore to get his life back on track and, as the story opens, he appears to have done just that; he has a loving wife, three wonderful children, and that possible nomination to the highest court in the land.

When Abby doesn’t show up for a reception and then misses dinner, the Serrats become worried. Sean asks his neighbor, who happens to be the deputy director of the FBI, to help him search for her. Their hunt takes them to her estranged boyfriend’s apartment.

The boyfriend, Malik Montgomery, is an African-American student clerking at the Supreme Court. Under some rough questioning from Sean, he admits to having an argument with Abby and lies about when he last saw her. When Abby’s cellphone is found stuffed under Malik’s mattress, he is arrested and eventually charged with her murder.

The Advocate’s Daughter is set in the familiar Washington, DC, of federal government buildings and powerful politicians — Sean even has a meeting with the president. While he provides a well-observed description of the Metro, this is the not the gritty urban landscape familiar to readers of George Pelecanos’ DC-set novels.

Franze keeps the reader guessing as to the possible motive for Abby’s killing, including Malik’s jealousy, the possibility of another lover, drug dealing, something in the past of one of the potential nominees — including her father’s, or the case of a convict serving a life sentence that Abby also was investigating. But the suspense is not sustained over the course of the novel. It is frequently shattered by Sean’s sometimes inexplicable behavior in trying to solve Abby’s murder by himself. Twice he confronts a local drug dealer who may have had dealings with Abby and receives a severe beating both times. The latter of these confrontations puts his teenage son at grave risk.

Ultimately, the novel suffers from too many red herrings, coincidences, and farfetched plot points — frequent pitfalls for first-time novelists. Little is made of the racial aspect of charging Malik with Abby’s murder — there is a single unexciting court scene following an initially promising setup in which Malik’s lawyer visits Sean and attempts to convince him of the young man’s innocence.

And without identifying the murderer, one has to wonder why someone would bring a silencer into the Supreme Court with no expectation of its need. Too many such scenes stretch the reader’s credulity beyond the breaking point.