The Castle of Whispers: A Novel 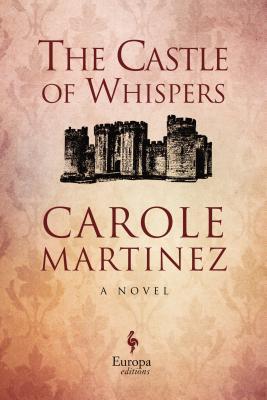 The Castle of Whispers, a new novel by bestselling French author Carole Martinez, is part fantasy and part hard-hitting social commentary. Martinez draws on France’s rich tradition of courtly love, medieval marriage rituals and religious fervor to transport the reader to 12th-century Burgundy, where feudal lords rule with an iron hand and minstrels roam from court to court. In this atmosphere of rigid social hierarchy and violence, women are chattel. Aristocratic women are pawns in elaborate political alliances, and lower class women are playthings that men use and discard at will. Therefore, it is not surprising that a scandal ensues when, in 1187, 15-year-old Esclarmonde (literally, light of the world) defies her father, the Lord of Whispers, and refuses to marry the husband he has chosen for her.

Esclarmonde determines to devote her life to God, and when a lamb appears at the aborted wedding ceremony, the country folk see it as a sign of divine sanction. After refusing to marry, Esclarmonde informs her father that she will live as an anchoress in a small cell he is to construct by the chapel of the family castle. Shortly before her confinement, a man brutally rapes her when she takes one last walk in the nearby woods. Nine months later, she bears a child, Elzéar, and the peasants celebrate what they believe to be a virgin birth. They now regard Esclarmonde as a holy woman and flock to her barred window to unburden their souls, so rather than finding solitude, Esclarmonde is now engulfed in activity: “I was gradually becoming a prophetess. I had convinced myself that…I was able to see into their souls, that Christ was opening their hearts to me.”

Because the local Archbishop Thierry II is so thrilled with the recognition Esclarmonde’s success has brought to the precinct, he never asks who Elzéar’s father might be. Besides, Esclarmonde has produced real miracles: The fields have been fertile and no one has died in the vicinity of the Whispers since she entered her cell.

Thus, in The Castle of Whispers, Martinez adopts a nuanced position with regard to religion. The rumors that surround Esclarmonde form walls of whispers that have no foundation in reality, but are rather the product of the peasants’ need for myths. Still, Martinez does not suggest that religion is entirely baseless, existing only because ignorant people require it. The clairvoyant Esclarmonde really does inhabit another dimension. She tells her story from beyond the grave and mentions repeatedly that she was never freer than when she devoted herself entirely to God. Faith, Martinez proposes, can be manipulated and abused, but that does not negate the transcendent.

At first, Esclarmonde takes her pious role seriously. She prays regularly and dispenses advice cautiously. However, as Elzéar grows, she becomes more and more engrossed in motherhood and less concerned with her flock. She begins to toy with her followers, demanding that they perform ridiculous rituals. She also neglects her prayers and feels increasingly distanced from God, although she never completely loses her faith.

Realizing that she cannot raise Elzéar alone in her cell, Esclarmonde eventually sends him to the Lord of Whispers to rear as his own son. To her horror, her father pierces Elzéar’s palms with nails and returns the child to her. Stories of the miraculous baby, his hands now marked with stigmata, multiply, and Esclarmonde becomes more powerful than ever. Eventually she convinces her father to repent of his sins by joining the Emperor Frederick Barbarossa in his Crusade to the Holy Land. In visionary dreams, she follows the progress of Frederick’s army and witnesses the fate of her father and brothers.

Lothaire, Esclarmonde’s former prospective bridegroom, was once a ruthless womanizer, but rejection teaches him humility and transforms him into a gentle poet in the courtly tradition. With the guidance of skilled troubadours, he learns to play the vielle, a medieval stringed instrument similar to the modern violin, to compose delicate verses for Esclarmonde. But now that Lothaire has become a man she could actually love, Esclarmonde is no longer free to marry, and her efforts to have the Pope release her from her vows unleash a host of unwelcome consequences.

In The Castle of Whispers Martinez’s displays an impressive knowledge of French medieval culture. Details of everyday life in 12th-century France and the use of traditional medieval names such as Esclarmonde and Elzéar help to ground us in an exotic time and place. Yet, the issues Martinez explores are highly relevant today, and her take on such questions as the commodification of women, ideological manipulation, mass hysteria, motherhood, and the fine line between faith and superstition is hardly facile. For example, although she shows medieval women to be vulnerable, she also shows them as powerful in their roles of administrators of their husbands’ estates (Douce, wife of the Lord of Whispers, is a superb manager), holy women, healers and herbalists.

Martinez has written a fascinating novel, full of unexpected twists and bizarre yet recognizable characters, among them Berengere, a green-haired siren whose voluptuousness enthralls men; the endearing swindler, who is Berengere’s lover; and an ancient midwife, who helps Esclarmonde through her ordeals. Martinez’s evocative images and flowing language create an atmosphere of mystery and otherworldliness. The Castle of Whispers will transport readers to other times and other realms, yet provoke them to reflect on their own world.

Bárbara Mujica is a novelist and professor of Spanish literature at Georgetown University. In addition to a Ph.D. in Spanish she holds an M.A. in French and studied at the Sorbonne. Her latest novel is I Am Venus, based on the life of the Spanish painter Diego de Velázquez. She is also author of Frida and Sister Teresa, based on the lives of Frida Kahlo and Teresa de Ávila, respectively.