A criminal profiler seeks a mass murderer while confronting her own mother’s psychopathic history. 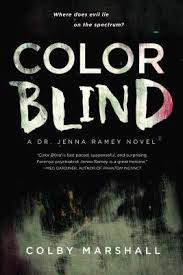 Now in private practice after leaving the FBI to concentrate on raising her baby daughter, Jenna is called on to question a mass murderer who says he will talk to no one except Dr. Ramey. The man, Isaac Keaton, is half of a killing team dubbed Gemini. He surrendered calmly after shooting more than a dozen people at a theme park, but his partner, who killed almost as many and escaped capture, is still at large. Finding Keaton’s partner before he kills again is imperative, and Jenna agrees to help the task force — which includes her baby’s father, from whom she is now estranged.

Jenna possesses an advantage that most profilers lack: an unusual neurological condition called synesthesia, which produces involuntary mental and sensory connections. Synesthesia takes several forms, but Jenna is a grapheme-color synesthete, associating colors with people, places, events, and even days of the week. Often these spontaneous associations give her clues about people and their emotional states, and warnings about dangerous situations. The author herself is a grapheme synesthete, but Jenna is the first character to whom she has given this trait.

While synesthesia may be the most obviously intriguing aspect of the character, Marshall doesn’t overdo it and never presents it as a superpower enabling Jenna to solve crimes that baffle others. Like any profiler, she relies on observation and instinct, and she is regarded as one of the best in her profession. Isaac Keaton, however, is a special challenge. Intelligent, well-dressed, and apparently educated, Keaton could be mistaken for a successful businessman.

Accustomed to dealing with psychopaths, Jenna recognizes him as a soulless monster and is confident she can deflect his attempts to dominate and manipulate her. She is shaken, though, when he reveals a detailed knowledge of her personal life and traumatic family background and claims to have a connection with her mother, Claudia, a serial killer currently residing in a mental institution. Allowing himself to be arrested may have been a ploy to gain access to Jenna — but why?

Jenna and members of the law enforcement task force theorize that Keaton’s killing partner is someone so embittered and enraged by a crime against a loved one that Keaton was able to lure him into acts of vengeance against society. As the police pursue that theory, Jenna confronts her mother and attempts to learn whether Claudia and Keaton have an actual connection — and whether their collusion threatens Jenna, her father, and her young daughter.

For 17 years, Claudia has evaded trial for her own violent crimes by successfully faking mental incompetence. Jenna realizes, however, that it’s all an act. Claudia is a clear-headed, ruthless psychopath who knows how to read people and how to project an appearance of helpless illness. With Jenna — who was instrumental in putting her mother away and still hopes to see her on death row — Claudia drops the act. She gives no believable answers about her relationship with Keaton, but she teases Jenna with investigative tips, reminiscent of Hannibal Lecter’s conversations with Clarice Starling.

Normally cool and professional on the job, Jenna is still emotionally vulnerable when her work requires her to face the miscreant who gave birth to her, and she struggles to maintain her composure and pull scraps of useful information from Claudia. The mother, too, wants information from the daughter who has always seen through her. “What was it, Jenna?” Claudia asks. “How did you know when no one else saw?” Jenna responds, “You can figure out surveillance cameras and conning orderlies, but you have to live with that one mistake. One mistake, and believe me when I say this: you will never know it.”

Meanwhile, the second shooter hides in plain sight, overlooked by Jenna, the police, and the FBI as he insinuates himself into a support group for violent crime survivors and plans a future attack. While he maneuvers to carry out Keaton’s grand plan, yet another killer, a father driven mad by grief, commits a string of murders in his search for his daughter’s killer. Marshall broadens the reader’s perspective and keeps the suspense level high by telling the story from multiple viewpoints and weaving in characters such as Keaton’s sister, who still sees him as a troubled but beloved older brother.

Strong dialogue and sharply drawn characters, combined with an unflagging pace and realistic procedural details, will keep thriller lovers turning the pages, but Jenna’s twisted history as the child of a psychopath is the emotional heart of the story. Her memories and present-day conversations with Claudia are as chilling as the most coldblooded murders. The ending is all the more satisfying for its promise that Jenna hasn’t seen the last of her mother.

Sandra Parshall is author of the Rachel Goddard mysteries, set in Virginia. Her latest title is Poisoned Ground. She lives in Northern Virginia.