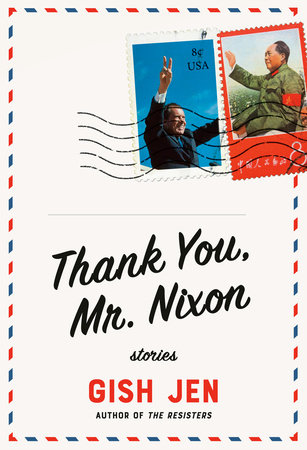 It all started with Pat Nixon’s coat. Credit for the opening of China to the West may go to her husband, but — according to deceased China native Tricia Sang, whose letter to the president introduces this collection of interconnected stories — it was Pat’s “bourgeois…antirevolutionary” red coat that captured the hearts and imaginations of the Chinese. “It was corrupt and corrupting. Couldn’t we feel its pull?”

And that is why Tricia, who in life ended up being a talented coat designer, is writing from her spot in Heaven to Richard Nixon in Hell to say, “Thank you, Mr. Nixon, for bringing that coat,” because it planted the first seeds of Chinese capitalist aspiration.

The letter is a brilliant device to whisk the reader into the landscape that Gish Jen renders in Thank You, Mr. Nixon. Jen reminds us, at the time of Nixon’s visit in 1972, how recent were the predations of the Great Leap Forward and the Cultural Revolution, with its brutal Red Guards. Indeed, the Revolution was still underway. In her letter, Tricia notes that, even in Heaven, there is argument over whether Mao was responsible for 25 or 45 million deaths; no one argues that it was only 4 or 5 million.

Nixon’s politically risky China gambit had several strategic intentions, including to help end the Vietnam War and to play China and Russia off of each other. (As Tricia congratulates Nixon, “And mister, but it scared the Russians, to see China and America make friends! That was something only a redbaiter like you could have pulled off.”)

But it was also that Nixon needed a way to pump up the sagging U.S. economy, and he saw the vast commercial potential if he could tap into the most populous nation on earth as a market for U.S. goods; American exceptionalism could never envision the deluge coming in the other direction. And conventional wisdom here held that communism must collapse under the steamroller of capitalism, leading to a more open system of government that was at least democracy-adjacent. So much for conventional wisdom.

If there is a voice in Mr. Nixon that summarizes the conventional Chinese wisdom during the 50 years from then until now, it is that of matriarch Tina Koo, whose mantra to her family is, “No politics, just make money.” Tricia has already recapped for us the Chinese self-preservation tactic of adapting quickly to an ever-changing set of rules, and Tina and her husband, Johnson, are among the first to grasp that suddenly owning a successful commercial enterprise is fine but — as always — questioning the government never is.

Members of the Koo family and their acquaintances the Hsu family serve as the central characters throughout Jen’s stories. We follow them and various members of their circles from the first post-opening cultural exchanges between China and the U.S. onward through the decades.

Our awareness of time unfolding is based on the accretion of successive generations of Koos and Hsus, as well as from references to such events as the Tiananmen Square massacre in 1989, the 1997 Handover (of Hong Kong from the U.K. to China), the elimination of China’s presidential term limits in 2018, and, finally, the current pandemic. Stories buzz with the anxiety of the increasing unrest in Hong Kong under the mainland’s tightening grip.

Most characters appear in more than one story, such as 4-year-old Amaryllis in “It’s the Great Wall!” who is 40 when we catch up with her again in “Amaryllis.” Each character is deliciously rendered with heart and humanity, and Jen’s affectionate, insightful wit makes these stories sing.

She deals with the minutiae of family drama — such as in “Lulu in Exile,” in which Marge Hsu sabotages the romance between her favorite, successful son, Arnie, and Lulu Koo by being deviously accepting of Lulu — as well as with far larger issues such as one’s moral complicity in oppression when one adopts the mantra “No politics, just make money.” Or, conversely, the ramifications in an authoritarian state of pointedly rejecting that mantra.

In “Duncan in China,” Duncan Hsu — Marge’s ne’er-do-well son, whom she calls every day “lest Duncan forget that she was not speaking to him” — finds himself in the midst of his own moral dilemma when he takes a position as a “foreign expert.” He is pursuing neither money nor politics but simply looking to find his place in the world and to do some good. He feels he is willing to make sacrifices to do so — that is, until the moment comes. It’s hard to hold his decision against him, though; it would take a saint to make a different one.

The cultural pressure to excel, to be the dutiful child, suffuses these stories, too, leaving its marks everywhere. (There is also the parental heartbreak of feeling that one’s children have abandoned duty.) These issues, along with the personal pain of a family experiencing the effects of dementia’s onset, the impersonal cruelty of U.S. immigration policy, and the corrosive effect of shared cultural misunderstanding all collide to quiet, heartbreaking effect in “No More Maybe.”

There is also a central mystery unfolding within these stories of what happened to Bobby Koo, the brilliant, talented first daughter of Tina and Johnson, who walked away from her job on Wall Street to run off with a drummer, turning her back on making money. In the years since, Bobby has, to Tina, entirely disappeared. “She was the best of us,” says middle sister Betty, who has been the dutiful daughter by keeping her head down and amassing riches. (Though, “It was convenient to be rich, you had to say.”)

In the collection’s final story, “Detective Dog,” it takes Betty’s perceptive 9-year-old son, Robert, adopting the title persona and his father’s magnifying glass, to peel back the layers of the mystery as he interviews his mother for a class assignment. That his older brother, straining under a desire to join Hong Kong’s protesters, has packed up and left only adds to Robert’s need to find answers. Here, in their vast New York apartment, thousands of miles from their ancestral homeland, Robert grasps Betty’s words, “The Chinese government likes to know all your family members.”

Sometimes, the small, hidden acts of resistance are all that courage allows — and sometimes, that’s powerful enough.