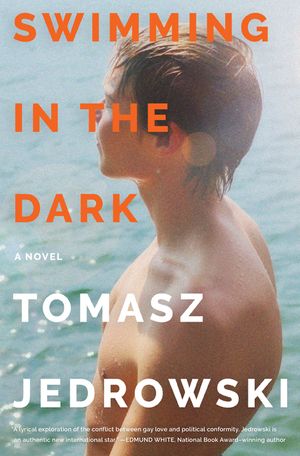 Tomasz Jedrowski’s seductive coming-of-age debut novel, Swimming in the Dark, reads like a memory play. Tennessee Williams coined the term to refer to “The Glass Menagerie” and perfected it in other plays (most notably “A Streetcar Named Desire,” “Summer and Smoke,” and “The Roman Spring of Mrs. Stone”) and in the short-story collections Hard Candy and One Arm and Other Stories. Thomas Mann’s The Magic Mountain and Gabriel García Márquez’s One Hundred Years of Solitude are exemplary representatives of the concept in novel format.

Regardless of genre, the form focuses on the past as narrated by the main character. It usually involves reliving profoundly painful memories recalled after a significant period of time before some resolution occurs.

Jedrowski’s exquisite novel vividly traces the life of immigrant Ludwik Glowacki from his childhood in Poland to that country’s declaration of martial law, which Ludwik hears about on the radio while living in the Slavic community of Greenpoint, Brooklyn. From the “dreadful safety of America,” he is instantly thrown back to a time before “loneliness covered [him] like night-blue tar.”

Ludwik addresses his remembrances to one of his most recent lovers, Janusz, whom he met at an agricultural camp designed to politicize youth. The narrator first suspected he was gay when he felt an uncontrollable “need to kiss” a 9-year-old neighbor boy, Beniek, after becoming attracted to him during Holy Communion lessons. This was also the first time he linked desire with shame.

Unfortunately, Ludwik’s love is in vain: His grandmother tells him, “Beniek is different from us.” Ludwik isn’t sure what that means, nor does he understand why Beniek and his family suddenly leave for Israel one day. He does, however, experience a feeling of loss and the end of innocence, which he believes prepare him for the fragile and dangerous relationship with Janusz.

By the time the two men meet, Ludwik is 22 years old. On a bus out of 1980 Warszawa to a “work education” youth training facility, their eyes lock for an “infinite, interminable instant in mid-air.” A “flash of heat” travels from “[his] stomach to [his] cheeks, thoughts jumbled like a ball of string.”

Ludwik and Janusz soon develop a bond that goes beyond the camp experiences of swimming in the nude and sharing a love of books.

One particular book, James Baldwin’s Giovanni’s Room, becomes the cornerstone for much of the novel. In introducing it to Janusz, Ludwik tells him it is his own story, a book “written for him.” The book is an illegal, “unauthorized, underground” publication whose themes of pain and duplicity resonate with the two new lovers.

After they leave the camp, Ludwik and Janusz hitch a ride to the lake district of Poland, seeking a freedom unavailable to them in the city. There, they quickly learn that political differences will define them.

Janusz believes his only recourse is to work for the government and become a member of the Communist Party. Ludwik, on the other hand, thinks the only way to have personal freedom is to be able to “choose for yourself.” Despite their different philosophies, they continue their intimate involvement.

Ludwik is “paralyzed by possibility, caught between the vertigo of fulfillment and the abyss of uncertainty.” His forays into protesting lead him to the distribution of anti-government flyers, and eventually he resolves to leave Poland.

The novel details the bureaucratic machinations Ludwik must endure as he seeks help with the red tape from Janusz. Success, Ludwik knows, will mean the end of their romance and the beginning of a new, freely chosen life.

When he applies for a passport, Ludwik is asked to name the names of other homosexuals he knows — in essence, to betray Janusz. His moral dilemma is to decide between power and pride.

Author Jedrowski does a superb job of delineating the painful necessity of choice, of vacillating between social and individual freedom. Ludwik’s melancholy memories make an indelible impression. By the end of Swimming in the Dark, it’s clear that you might be able to take the boy out of Poland, but you can’t take Poland out of the boy.