The Orphan Keeper: A Novel

An abducted Indian child adopted by Americans struggles to find his birth family. 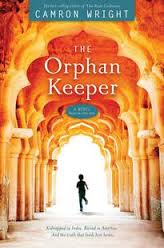 In The Orphan Keeper, Chellamuthu, a scamp of an Indian boy, and his family live in dire poverty. His father is “a man of few words, hasty hand and strong drink — often in reverse order”; his mother works dyeing fabric.

Running free in the village, 8-year-old Chellamuthu hangs out with older boys who encourage him to throw rocks, steal, and go where he’s been forbidden. His parents are at a loss to control him. At one point, his father burns the child’s feet to teach him a lesson, but the devilry continues.

When Chellamuthu is lured into an alley with the promise of a mango, a rare treat, he is grabbed and shoved into a van full of babies. Money changes hands, and he’s taken to a distant orphanage. Over and over he claims to have a family, but the administrator tells him he has been sold by that very family.

Camron Wright’s easy-to-read and engaging novel tells of Chellamuthu’s early life in India, his adoption into the U.S., his eventual awakening to his past, and the search to find his Indian family. Based in real life, documents and pictures at the back of the book attest to the underlying “truth” of the story.

After Chellamuthu is abducted, the narrative divides, following life at the orphanage and his family’s frantic search. The latter lacks specificity, with the exception of his mother’s reliance on astrologers.

On the other hand, Chellamuthu’s experiences in the orphanage are highly detailed: the broken glass atop the compound walls; the open sewer and the blue bucket that serves as a toilet; and his attempts to convince them that he has been abducted.

In one of the more astonishing turns, Chellamuthu manages to escape through the sewer. However, when he’s on the road to home, he remembers the sick girl he’s been nursing (an act of dharma, or serving, a concept emphasized in his home). Worried that without him the little girl will die, his guilt forces him to return.

When a novel is quasi-biographical, two possibilities exist for the author: stick closely to the events as they occurred with some small embellishments, or bend the story to create an independent tale. Wright chose the former tactic, which means there are oddities.

For instance, the plot contains several jaw-dropping coincidences which would be deemed ridiculous in a customary work of fiction, but because the events are at least partially documented, the reader accepts them. For the same reason — a life retold, not reshaped — the story wanders at times, usually in interesting directions, but not always in ways germane to the plot.

Inexplicably, Chellamuthu’s adoptive American mother is given short shrift. Her distress over details of the adoption — such as first being told the child is 4, and then learning he is really 8 — is well portrayed, as are her struggles to locate the child’s family when he learns enough English to tell her of his plight. Failing in her search, she quits her job to mentor him and ensure his success.

Then she disappears. In a major plot hole, the story jumps from the 8-year-old Taj (his American name) to high school, when he is no longer living at home. No explanation for the gap or the estrangement is given, which leaves the reader feeling cheated.

Throughout, Indian food plays an important role, calling forth some of the best descriptions. Taj muses about the orphanage food: “It had been constant, perhaps even repetitive, at least it stood up and talked back. It was pungent and flavorful, tangy and mysterious. It had opinions and it shared them, whether you agreed or not.”

In another section, an old man chops coconuts all day long, and the sound of it provides an important memory clue later in the book. And of course there is curry: “The family’s meals were always simple — even sparse — but curry often made an appearance. Curry rice, curry beans, curry coconut, curry squash…the aroma always stuck to his skin like poor, hungry children hoping for more.”

By college, Taj has adjusted to his all-white surroundings and has become so Americanized that an invitation to a curry dinner is worrisome: “Firing squad by Indian food and nowhere to run.” But then “the rising steam reached out and latched onto his cheeks with all of its fingers…The scent that swirled around his neck had started rubbing his shoulders, reminding him that once, a very long time ago, they had met.”

That meal begins a reawakening to his Indian heritage, apparently entirely forgotten, and we follow his increasingly desperate search, against all odds, to find his mother.

This fascinating novel paints a detailed picture of India far from the glamour of Bollywood, and takes the reader deep into what it means to lose a family and be transplanted into a new culture. It also details the drive of an adult to rediscover what was lost. Despite some extraneous details and unbelievable twists, Taj’s story entertains and touches the heart.

Terri Lewis lives and writes in Washington, DC. She loves to travel and photo-blogs about her adventures — Italy, France, and, next up, Switzerland and Germany — at terrilewis1.com.