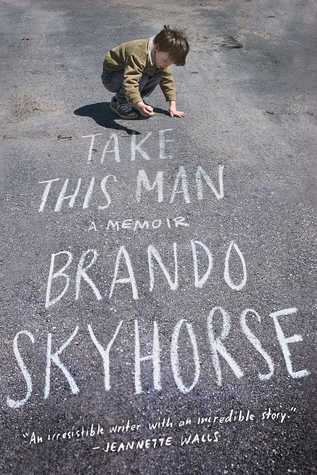 Brando Skyhorse’s memoir, Take This Man, is an artfully written account of his chaotic and unpredictable childhood in the Echo Park neighborhood of Los Angeles. At the center of the narrative is Skyhorse’s relationship with his mother, who crafted their life in the most unbelievable fashion.

An insatiable woman just as easily moved to fits of violence as to identity and personality shifts, Maria Teresa (a.k.a., Running Deer) reconstructed truth like a hobby. Early on, Skyhorse establishes his goal to solve the mystery of his birth father, whom he did not realize was the man his mother had labeled “Uncle Candy” in the few photos that remained of him.

Maria never formally divorced Candido Ulloa, an undocumented Mexican, but she used the threat of deportation to keep him permanently out of her son’s life. Candido and Maria had a tempestuous relationship, as was her norm, and she chased him away permanently when Brando was 3 years old. It was not long after that Maria reinvented herself as a Native American called Running Deer, and little Brando Ulloa as Brando Skyhorse, son of a Native-American chief.

While his grandmother didn’t have the same penchant for invention as her daughter, the elder woman loved a good story and went along with each version of reality that emerged when Maria married a new man every few years. In this complex literary memoir, the challenge Skyhorse faces is to portray lies as accurately as possible and to help his readers keep each storyline straight.

Skyhorse fills the early pages with sentimental, and at times disturbing, accounts of his mother’s eccentric lifestyle choices, unheard of in the conventional context of raising a small child. She habitually used personals ads to browse candidates for relationships, brought Brando on trips across country to meet new families, and even posted an ad offering him up for adoption.

As a young child, Brando soaks it all up without complaint as long as his mother and grandmother continue to love and nurture him with hugs, books, and attention. But it’s hard to reconcile Maria’s sometimes incredible warmth with the frightening scenes of her threatening five-year-old Brando with a knife or shoving his face into the toilet to drown him while raging over misplaced cereal-box tops that would have secured him a free train trip home from a journey to see his “real” father.

As a child, Brando experienced countless mixed messages, but he also, as children do, took whatever love he could get. Between Maria’s mood swings and a parade of inconsistent and questionable “father” figures, the child Brando depicts on these pages evolves into a survivor who learns to keep his mouth shut and his ears open.

Skyhorse reflects honestly about how struggling to function amidst the chaos in his household left him traumatized; he writes vividly and emotionally without losing control of the point of the narrative: to find his father, and perhaps, in that way, to find an alternative reality he never got to experience. He also avoids the (understandable) pitfall of vilifying his mother. Instead, he presents her in a compassionate, balanced light, even giving space to her perspective in the form of excerpts from her own unpublished memoir.

This book is as much about Skyhorse’s journey toward a reunion with his father as it is about his struggle with his mother’s legacy — and the overarching importance of stability in a child’s life.

What makes it so readable is the polished telling of his endlessly fascinating, dysfunctional family. Written like a movie — at times, a dark comedy; at others, a drama — the story is deeply personal and rich in detail. Such a masterful package could only be the product of a meticulous and careful writer.

Susanna Ferrara is a member of the English faculty at Northern Virginia Community College’s Annandale Campus. She has published creative nonfiction essays in Voices Rising: Stories from the Katrina Narrative Project and the Northern Virginia Review.

The riveting tale of a Standard Oil executive determined to amass one of the world's most important literary collections.