Strange Fruit: Racism and Community Life in the Chesapeake — 1850 to the Present 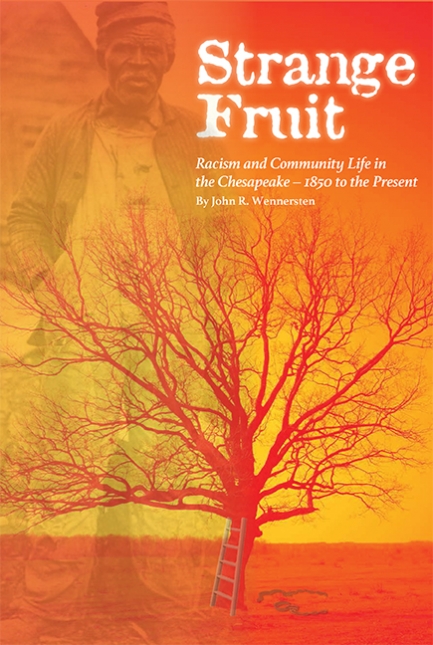 For more than 40 years, John R. Wennersten, emeritus professor of history at the University of Maryland Eastern Shore, has been writing about the social, cultural, and natural history of the Chesapeake. His books include The Oyster Wars of Chesapeake Bay, Maryland’s Eastern Shore: A Journey in Time and Place, and The Chesapeake: An Environmental Biography. Clearly, he has made himself an authority on the region.

Though the opening of the Chesapeake Bay Bridge in 1952 made the once-isolated agricultural and fishing communities on the Eastern Shore open to widespread development, residents who have a long heritage there still identify, in Wennersten’s words, “more with the region as a social entity than being part of the State of Maryland.” It’s a large expanse geographically, encompassing more than a third of Maryland’s land area, yet its total population accounts for only eight percent of the state’s more than 6 million people.

With Strange Fruit, Wennersten is back again, though a clarification needs to be made at the outset: The book’s subtitle, Racism and Community Life in the Chesapeake — 1850 to the Present, is misleading. His focus is not on the Chesapeake region as a whole but almost exclusively on Somerset County, which includes the towns of Princess Anne, Crisfield, Deal Island, and, until 1867, Salisbury.

Wennersten has set out here to write a “local history,” as he explains in a polemical preface, that gives readers “a palette for understanding racism and the evolution of racial ideas often overlooked by scholars…Local history cuts across the personal and public realms of experience [and] gives us a chance to engage in the historical consciousness of ordinary citizens.”

In an earlier book, the author wrote that “nothing haunts the Eastern Shore of Maryland quite like the specter of Negro slavery.” Yet the truth is that nothing haunts the entire United States more than the specter of slavery and white supremacy. And despite the “progression” in race relations, “retrogressions,” as Wennersten puts it, are still very much with us. Every day.

Does the history of race relations in Somerset County really differ from that in other parts of the country, particularly in the slaveholding South, but also in other regions of Maryland? After all, in 1860, enslaved Blacks made up 12 percent of the Free State’s population, while free Blacks, some of whom owned land, made up 12 percent of Somerset’s population. This is a big history question that Wennersten is writing about at ground level.

Drawing on local histories and memoirs, on state and county records, on newspapers, on interviews, and on his own previous research, Wennersten tracks the impact of a changing political and social landscape on the various classes in Somerset County. Among them are wealthy white slaveholders like John Crisfield; poor whites who first came to the Eastern Shore from England in the 17th century as indentured servants, some of them convicts; enslaved Blacks (Maryland was the third colony to legalize slavery); and free Black landowners, small farmers, carpenters, blacksmiths, and oystermen.

From the beginning of the 19th century, racial hatred and retribution against Blacks by white slaveholders was increasing, not only because of the prevailing belief in white superiority but also out of fear over slave uprisings and escapes. By 1860, an estimated 800 enslaved people had escaped from Maryland plantations, while the growing number of free Blacks, “who referred to themselves as ‘Free men of color,’” led to escalating threats by whites.

Wennersten recounts how, in September 1858, white delegates from four Eastern Shore counties met in Cambridge, 50 miles north of Salisbury, to advocate that free Blacks be re-enslaved. The Somerset County delegation went so far as to pass a resolution declaring that “‘free negroism’ and slavery were incompatible and that Negroes should be made to go into slavery or leave the state.” Though not passed by the state legislature, the resolution was a register of the bitterness whites felt toward Blacks.

The chronological chapters of Strange Fruit each open with a brief “National Overview”’ and conclude with several period photos. In these overviews, Wennersten might have drawn more on his extensive knowledge of the region to reflect on Somerset’s uniqueness or lack of it in relation to other nearby counties. And while the photographs are evocative, they provide little historical information. For instance, a shot of six young men standing behind six seated women is simply labeled, “Graduating Class Princess Anne Academy.” How much more we could have learned about Black education or just the academy itself.

On the other hand, the photograph of a “Lynched African American 1930s” is wrenching enough in itself, as is the drawing of the lynching of George Armwood in 1933 that first appeared in the Baltimore Sun. The illustration so revolted Abel Meeropol, a white songwriter and poet in New York City, that he expressed his unbearable outrage in “Strange Fruit,” the song Billie Holiday later made her own.

John Wennersten is an engaging stylist — his depiction of the brutal mobs who gathered for the lynching of Matt Williams, Euel Lee, and George Armwood is detailed and compelling — but can he (or anyone) adequately explain the evolution of racial ideas and how they have continued to sustain themselves? It’s still an open question.

As a history of Somerset County, Strange Fruit stands by itself. But readers interested in the social and political history of Maryland’s Tidewater region as a whole might do well to begin with Wennersten’s earlier, more synoptic coverage of area race relations in Maryland’s Eastern Shore. From there, they can go onto the targeted examination found in Strange Fruit.

Merrill Leffler is the author of the poetry collection Mark the Music and the publisher of Dryad Press.