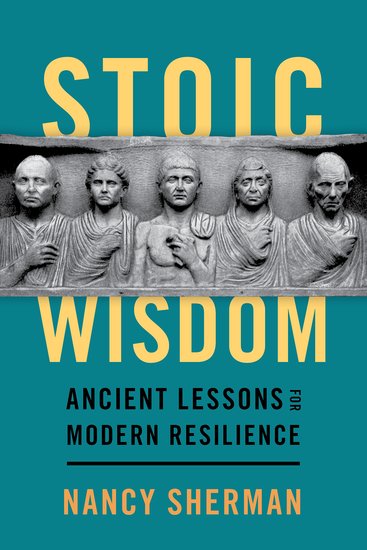 If you think philosophy is an arcane, useless subject, Nancy Sherman’s Stoic Wisdom will change your mind. Stoicism is “an accessible philosophy with pithy wisdom” that can help us deal with the stress of everyday existence, argues Sherman, a professor of philosophy at Georgetown University.

Stoicism has enjoyed a revival recently. Many self-help books draw on the teachings of Seneca, Epictetus, and other Stoics to teach resilience in the face of misfortunes such as job loss, domestic strife, and now, covid-19. It is not an elitist philosophy but seeks to guide people in all walks of life in their search for calm in a chaotic world.

Sherman explains that “the goal is inner strength, woven through and through with goodness rooted in reason.” Its methods are both philosophical and psychological.

Although Stoicism has been called the new Zen, Buddhism strives for disengagement from society and the eradication of the self, while Stoicism teaches self-mastery within the context of daily life. Stoicism gives us tools for building resilience in the face of ever-changing, often confusing circumstances.

Stoic strains run throughout history, and Stoicism provides a bridge between ancient and modern thought. Sherman begins with an overview of the Stoics, from Socrates and his disciple Plato to Kant. Although these thinkers differ among themselves, they each contribute to our understanding of the goals and methods of Stoicism.

Sherman stresses that she is writing in the midst of a pandemic as dangerous and threatening as the upheavals facing earlier generations, and so now is a propitious time to learn from the Stoics and “use Stoic tools wisely.”

Anticipating adversity is key to the Stoic approach to easing anxiety. That does not mean preparedness depends on the individual alone, for to be ready for a crisis as monumental as a pandemic, we need the participation of many government and private institutions, as well as dedicated individuals. Still, while recognizing the limits of our personal control, we must accept agency and discipline ourselves to prepare for difficult circumstances. This means marshaling our inner resources and preparing to act rationally and virtuously in a crisis.

Sherman offers the example of a doctor doing her absolute best to keep a critically ill patient alive during the pandemic. She concludes: “Goodness, and the peace of mind that can come with it, is in doing our best, operating at the highest levels of excellence with those similarly committed.” Trying hard is not a safeguard against failure or emotional distress, but it can provide psychological sustenance.

The self-discipline and concentration required to perform lucidly and honorably in a crisis requires that one hold one’s emotions in check, but Sherman argues that Stoics need not be impassive. For Stoics, she explains, “Emotions are voluntary mental actions.” Anger, for example, does not simply overcome us. We assent to it and choose what we think is an appropriate behavioral response. But once we give into it, we can no longer control it.

Though, for some, the notions of self-reliance and rugged individualism are precisely the appeal of Stoicism, “without each other, we are severed body parts, fragmented and disconnected,” writes Sherman. “We can’t function well or at all.” For true Stoics, social supports (family, friends, expedients such as helplines) as well as inner strength are essential to building resilience — the ability to “bounce back” after a calamity.

Social connection also means “being at home” in the world. As rational human beings, we are comfortable and functional with other rational human beings. “Reason is the common good that binds us” and enables us to build a social world in which we are at peace with ourselves.

Sherman has previously written extensively on “moral injury” in the military; that is, the emotional damage suffered by soldiers who perform acts in the line of duty that conflict with their own moral beliefs. Here, she revisits the subject, noting that Admiral James Stockdale, who was shot down and imprisoned in Vietnam in 1965, derived enormous strength from the writings of Epictetus, a Roman slave who believed that true freedom resided in self-mastery.

Stockdale credited Epictetus with his own survival, and he passed his philosophy on to generations of plebes. “Suck it up and truck on” became their mantra, but argues Sherman, this extreme brand of Stoicism can be harmful. The military culture “is one not only of unbridled can-do-ism, but of constraint and chains of authority that squeeze an autonomy and force choices that leave moral detritus in their wake,” she writes.

This means that soldiers are sometimes placed in situations in which they are responsible for deaths (often unintentional) of civilians, including children. The aftermath can be devastating. These soldiers often cannot just “suck it up.” They are overwhelmed by shame, pain, and anger. Sometimes, their moral injury is so severe that they become suicidal. Sherman insists that “this very moral injury may open the way for moral growth and the calm of repair,” but for that to happen, soldiers must face the realities of war and the moral ambiguities involved.

For Sherman, extreme forms of Stoicism are hardly practicable for moderns. (She considers herself a neo-Stoic.) Yet we can glean from the ancient and modern Stoics certain principles to enhance and facilitate our lives. While we can strive for psychological mastery, this should never come at the cost of human vulnerability — that is, the “suck it up” philosophy should not inure us to our own suffering or that of others. Rather than see ourselves only as self-determining individuals, we must learn to live in community, respecting and supporting each other, and monitoring and controlling our own emotions.

Nancy Sherman has written a practical, readable guide for everyday living. In this age of political polarization, impulsive tweeting, and the threat of covid-19, Stoic Wisdom is a refreshing reminder that reasonable behavior is still a possibility.