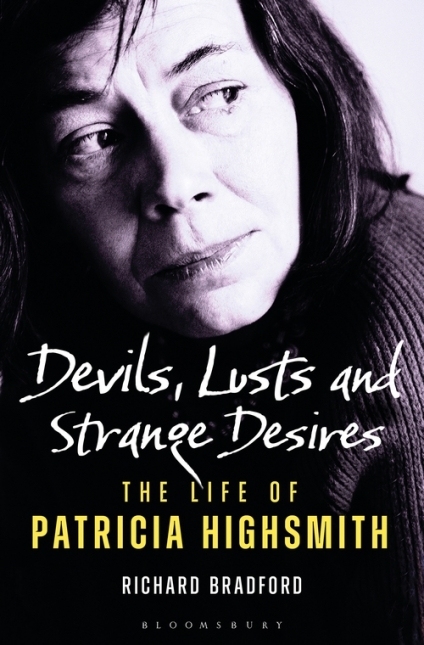 Crime novelist Patricia Highsmith died in 1995, but her reputation has grown substantially over the last 20 years, sparked by a flock of flashy movie adaptations and two first-rate biographies published in the first decade of the current century. Now, a new bio, Richard Bradford’s Devils, Lusts and Strange Desires: The Life of Patricia Highsmith, has been released to mark the 100th anniversary of her birth.

Bradford’s offering, markedly less hefty than its predecessors, relies extensively on both for its factual details. It covers the high points of his subject’s life while providing brief critical readings of Highsmith’s novels and short stories. The apparent goal: to illuminate connections between elements in her fictions and parallel events in the author’s personal life.

Discussing the latter means taking a deep dive into love and sexuality, matters that loom large in the recollections of folks who knew her. Also, as her biographers indicate, Highsmith’s accounts of her infatuations and affairs recur with ho-hum regularity in the 8,000 pages of personal ruminations in her unpublished diaries.

(These materials have previously been available only to researchers; they’re slated for publication by Liveright later this year.)

Although Highsmith did make occasional half-hearted forays into sex with men, she was joyously and enthusiastically gay — and subject to sublime flights of elation upon making a same-sex connection or in contemplating a new conquest. Still, as her earlier biographers confirm, her actual relationships, once consummated, often faded into transitory liaisons or squabbling, ultimately celibate associations.

For the most part, this is the landscape Bradford claims for his analysis of Highsmith’s work. As he tracks her life and relationships, he pauses, often with surprising brevity, to link elements of plot or characterization in a Highsmith novel to contemporaneous events in her life. Perhaps because of their brevity, these conclusions can come across as tenuously supported or even hasty and superficial.

Most surprising of all, Bradford seems singularly unappreciative of the consistent quality of Highsmith’s crime fiction, as if his whole enterprise as biographer were a painful duty. To wit:

“Strangers on a Train and The Talented Mr. Ripley launched her, and some of her other books in the 1950s and 1960s deserve interest as examples of private disturbance distilled into modernisations of Poe. After that, however, she drifted between works of genius and (arguably) some of the most dreadful pieces of suspense fiction ever to go into print.”

Despite this reductive assessment, Highsmith — for all her stylistic flaws — was adept at developing driving, twisty narratives, portraying shifting inner states, and managing creepy plot ironies with chilling, nonchalant aplomb. Bradford’s dismissive view of her work is not likely to sit well with Highsmith’s legion of 21st-century fans.

A telling example: Bradford is no admirer of the four Tom Ripley continuations — Ripley Under Ground (1970), Ripley’s Game (1974), The Boy Who Followed Ripley (1980), and Ripley Under Water (1991) — and he never identifies the previously mentioned “works of genius” produced by Highsmith in the last 25 years of her life. Excepting a handful of early books in her 22-novel oeuvre, Bradford does not seem to care much for Highsmith’s fiction.

So, we’re left with the rebellious life and outspoken personality of Highsmith, which Bradford, citing her previous biographers, traces accurately and vividly. The curious neophyte might well be satisfied with Bradford’s thoroughly indexed book for a quick introduction to Highsmith’s life, a saga that’s particularly well summarized in his excellent first chapter.

But there’s a possible complication here for modern-day fans. Although you’d never know it from her most frequently read novels, Highsmith the woman was not very likable or personally admirable. Frequently drunk from morning until bedtime, she was often opinionated, surly, or sullen in her social interactions. What’s more — and especially in the latter half of her life — Highsmith routinely spewed hateful antisemitic and racist screeds under the thin guise of political opinion.

Patricia Highsmith’s current social-media admirers might be charmed by the slasher-flick impulsivity in her fiction or her meme-worthy eccentricities (such as toting a breeding colony of snails around in her oversized handbag). But they might be brought up short by the less savory aspects of her personality. In Devils, Lusts and Strange Desires, Richard Bradford is a reliable reporter on this disillusioning reality, yet he’s oddly disinclined to an appreciation of his subject’s fiction.