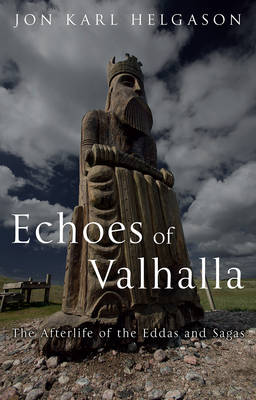 In Echoes of Valhalla, Jon Karl Helgason, a professor of Icelandic and comparative cultural studies at the University of Iceland, follows the trail of 12th-century Icelandic literature and Norse gods, heroes, and heroines like Gunnar, Hallgerður, and Leifur Eiriksson as they appear in contemporary books, comics, plays, films, and even videogames.

Referring to the Icelandic sagas and eddas as “pre-texts,” Helgason describes how the traditional characters and plots have taken on a life of their own or been adapted to reflect contemporary conditions. Sometimes segments from the literature of hundreds of years ago appear simply because an author falls in love with a narrative or even a series of names. J.R.R. Tolkien derived the names of the dwarves in The Hobbit from Völuspá, a series of early eddic poems.

Perhaps the most popular character from the Norse mythology is Thor, the redheaded god of thunder, who loses his hammer, Mjölnir, to the giant Þrymr in the eddic poem “Þrymskviða.” The condition that Þrymr sets for returning the hammer to Thor is that he be given Freyja, the goddess of love, as a bride. Because Freyja refuses to be part of that bargain, Thor humiliates himself by dressing as a woman, thus tricking the giant into returning the hammer.

Despite the depiction of Thor as somewhat laughable in “Þrymskviða,” he develops into a superhero in various comic books, a force that repeatedly saves the day for the people who surround him. Helgason explains the attraction for authors and cartoonists of Thor as a hero: “Society struggles against the invasion of an evil force but before all is lost, the protagonist manages to restore law and order.”

Consider the 15-volume Danish comic-book series “Valhalla,” by Peter Madsen, based on characters from Nordic mythology and narratives found in the eddic poems. Yet Madsen adapts these medieval elements to contemporary Danish issues of the late 1970s, such as the theme of gender equality expressed in the story “Ulven er los,” based on one of Thor’s adventures from Nordic mythology.

Although stimulated by ancient stories, the adaptations often reflect historic struggles. In “The Shadow of Valhalla” comics, published in the magazine Boy Commandos, the Norse god Oðin calls Hitler “an upstart,” and Thor defeats the dictator with his hammer. Refuting the Nazis’ appropriation of Thor as the ideal of the Master Race, Oðin announces, “Valhalla is the Norse heaven...not German.”

Best known in this country are the tales of “The Mighty Thor” from Marvel Comics, which first appeared during the 1960s. During the Cold War, Marvel aimed Thor’s hammer not only at mythical enemies, but also at the Soviet Union.

More subtle has been the afterlife of Hallgerður, a colorful female figure from 12th-century Njálssaga, a story permeated with pagan and Christian beliefs. Hallgerður is the wife of the hero Gunnar, famous for denying her husband a lock of her hair with which to weave a string for his bow to defend himself against his enemies, thus causing his death.

Fascinated by this scene, the Norwegian playwright Henrik Ibsen drew on Njálssaga as well as other sagas for his early work “Hærmændene paa Helgeland” (“The Warriors of Helgeland”). Other playwrights who drew on the character of Hallgerður include Gordon Bottomley, the author of “The Riding to Lithend,” and Thit Jensen. In her “Njal the Wise,” Jensen suggests that to become queen of Iceland is the goal of the character modeled on Hallgerður. Helgason even implies a link between Hallgerður and Shakespeare’s Lady Macbeth.

Helgason’s study will please readers thoroughly familiar with the saga characters and edda poems in their original appearance in Icelandic medieval literature. While some purists may resent the modern transformations of these sources, Helgason sees the constant adaptation not so much as a destruction of the original versions, but more as a signal to readers to consult the source, stating that the contemporary adaptations “are instrumental in promoting the eddas and sagas internationally.”

Also, it seems, nationally. Citing his own schooling and his growing up in Reykjavik as having been steeped in these old stories and poems, Helgason expresses concern that today’s young people no longer consider Egill Skallagrimsson of Egilssaga and Njall Þorgeirsson of Njálssaga as real historic figures because the stories are no longer commonly read.

In fact, this reviewer recalls reading Egilssaga years ago in high school in Reykjavik. But today, there is a concern that the Icelandic language is disappearing. Helgason concludes that the relationship of Icelanders themselves to their own history is not that different from that of a foreign traveler encountering the old stories as “visitors to a strange past.”

This reader puts the book down not with disdain for the distortions of the old stories, but rather with gratitude for their “afterlife,” including in comic-book form, as a reminder of a great medieval literary tradition and, in fact, an encouragement to return to the source.

A native of Iceland, Solveig Eggerz is author of the novel Seal Woman, published in 2014 (Unbridled Books) and of the forthcoming One Fish at a Time. She teaches personal stories and memoir for the Writer’s Center in Bethesda, MD.

From the trenches, a bleak assessment of America’s attempt to provide higher education for all.