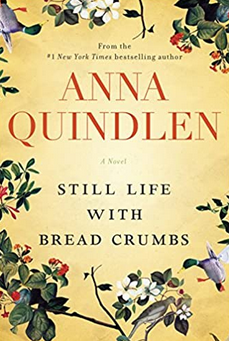 If there’s one element of Anna Quindlen’s writing where her brilliance is sure to shine, it’s in her eye for the detail that speaks volumes. From her earliest observations as a New York Times op-ed columnist to her varied works of fiction and nonfiction, Quindlen’s prose consistently hits the mark, describing life as we know it with remarkable grace and wit.

It’s a skill she puts to good use in her latest novel, Still Life with Bread Crumbs. The first chapter starts with a literal bang, as our heroine, Rebecca Winter, sits bolt upright in bed, reacting to the sound of an errant gunshot. By the time she realizes that the noisy culprit is a raccoon trapped in the crawl space above her ceiling, we’ve begun to figure out  how far her star has fallen. In one lyrical scene, Rebecca circles a darkened bedroom in a creaky old cottage with the cord of her alarm clock trailing behind her as she searches for an electrical outlet that doesn’t exist. With this simple and sorrowful pirouette, we come to understand how her life has been reduced to a realm that provides no place to plug in and no connectivity, literal or figurative.

Still Life with Bread Crumbs traces Rebecca’s journey as she teeters precariously on an economic knife’s edge. We see the once-famous photographer lying awake, counting her available cash backwards in bills due each month. We see the frail realities that come with being a woman “of a certain age,” one her own son describes, only half jokingly, as “the artist formerly known as Rebecca Winter.”

With deft descriptive strokes, Quindlen stitches together a background story, revealing how Rebecca has arrived at this sad state: in her 60s, alone, with financial responsibilities that can’t be met, and on a sad decline, artistically and professionally. Her situation presents a burden that can only be stemmed by producing some salable art or finding a cheaper way to live. Rebecca opts for the latter, subletting her Manhattan apartment and moving to a tired rental in a forgotten town, a world away from her “real life,” with hopes of jump-starting her no-longer-brilliant career.

As Rebecca faces her change of fortune, we can’t help but wonder along with her: How did a photograph of spilled wine and scattered bread crumbs, a picture she’d taken when she was trapped between her ex-husband’s unexpected dinner guests and a child with an ear infection, morph into an iconic image of an era? Why did the critics and luminaries invest so much meaning into a visual she’d merely captured as an angry afterthought? What’s our heroine to do, with the royalty checks from that famous image now few and far between?

Quindlen has often used fiction to expand on topics that are close to her heart. And although the issues have varied from novel to novel, the emotional balancing acts that women face remain a constant theme: work and family, parents and spouses, income and anxiety, the needs of loved ones and the imperative to take care of oneself. In Still Life with Bread Crumbs, she skips the front-page issues for those universal human tradeoffs, revealing how we all might find the gift of balance as we grow older, if we could just figure out what truly matters. Or, as Rebecca wryly ponders after an anxious chest-pain incident, how the world might be different if we could just find a way to pay attention to our hearts, “since (her) experience was that women overlooked most of what their hearts told them.”

Quindlen has also allowed herself a freedom that she might have wished for her main character: namely, the right to stop playing by the old, established rules. There’s a breeziness in this prose, a willingness to color outside the usual lines. And as Quindlen skips from one plot thread to another, and from one character’s point of view to the next, the writing engages. There are chapters that unfold as might be expected, followed by chapters that feel like ephemera — wedding invitations, obituary notices, and gallery brochure copy, items seemingly clipped and stuck between the pages for posterity. It’s almost as if the dribs and drabs of details the author might have written on the back of an envelope for her own use have found their way to the final draft as bookmarks. A less skilled writer might not have pulled off this patchwork effect, but in Quindlen’s hands, it works wonderfully and delightfully.

Where Still Life with Bread Crumbs stumbles, if ever so slightly, is in the nonessential details. Dialogue is not Quindlen’s strong suit; there are strings of chatty talk that are forced. On the other hand, I found my reader-self bemoaning the moments when Quindlen’s characters don’t say enough or behave inexplicably. Honestly, the guy comes to plow you out three more times, and you don’t even open the door to say thank you? You go for a hike, in the aftermath of a blizzard, without so much as a pair of snowshoes? Not buying it, sorry.

Small flaws, really. Because, in the end, Still Life with Bread Crumbs is a gem of universal truths. Like Jane Austen, Quindlen uses a micro-societal view to promote her take on the human condition, beginning with the Sense and Sensibility-esque real-estate downgrade to a cottage in the country. Quindlen has provided her readers with a gift: the assertion that women of a certain age have stories that deserve to be told. Stories that might even deserve happy endings.

A woman learns that her estranged father has committed suicide and returns to her hometown to make sense of what's left in his wake.