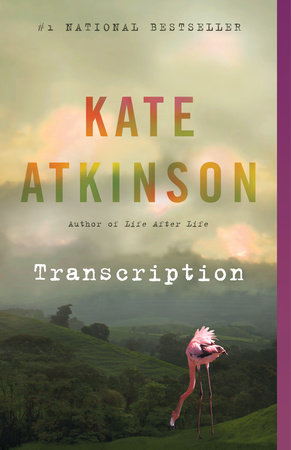 Kate Atkinson won both the UK Whitbread (now Costa) First Novel and Book of the Year awards with her captivating first novel, Behind the Scenes at the Museum. Subsequently, she won the Costa for Life After Life and its follow-up, A God in Ruins. Transcription, a first-class historic thriller, merits similar recognition.

In a closing author’s note, Atkinson credits Penelope Fitzgerald’s “gem of a novel” Human Voices with influencing the period and setting of her own novel. She says she had not intended to use the British Broadcasting Corporation as background, thinking Fitzgerald had “cornered the market…in novels about the BBC during wartime.” Then she discovered there was “so much more material to be mined.”

Fitzgerald’s novel is set squarely in 1940, at a time when young employees “felt a certain pride [at] scattering human voices into the darkness of Europe.” At a time when “[t]ruth ensure[d] trust, but not victory, or even happiness…[the] Broadcasting House was in fact dedicated to the strangest project of the war, or of any war, that is, telling the truth.” It was an “institution that could not tell a lie” when lies were ballast for survival.

Behind the scenes in the dank basement bunkrooms of the BBC, a group of women, some as young as 16, are referred to as the Seraglio by a male-dominated workforce because the director of the Department of Recorded Programmes “found that he could work better when surrounded by young women.”

The women, on the other hand, are fully aware of their importance being in “anxious charge of five thousand recordings in use every week.” They establish a supportive relationship that gets them through affairs, harassment, pregnancies, deaths of war-bound boyfriends and husbands, and the general exigencies and vicissitudes of daily existence during the Blitz.

Many of these circumstances and themes carry over into Transcription, which also focuses on 1940 but extends into several other decades. Atkinson’s novel centers on one particular character and functions primarily as an exploration of the world of espionage.

In the book’s brief opening section, set in 1981, Juliet Armstrong is 60 years old. As London and the world watch while a “sacrificial virgin was being prepared” for a fateful royal wedding, Juliet is hit by a car and hospitalized. As she hovers between “the darkness and the daylight,” the novel flashes back to two key periods in her life.

First, it jumps briefly to 1950, when Juliet was a producer in the Schools programs at the BBC. She thinks she sees someone from a decade before. In the “great web that stretched across time and history,” Juliet is certain that she has spotted Godfrey Toby, a.k.a. John Hazeldine.

Toby was her contact in a surveillance trap during WWII, when they exposed members of a Fifth Column. Together, “they had committed a hideous act.” It takes the rest of the novel to reveal what that act was.

The core of the novel, as in Fitzgerald’s Human Voices, occurs in 1940, when Juliet’s career in espionage began. She joins Toby in the scurrilous environment of spying as a transcriber. He masquerades as a Nazi agent, and periodically they meet in a flat where “chatter and gossip” are recorded by microphones hidden in walls.

Juliet, in the next room, listens to the exchanges of a “bunch of mumblers” who are “filaments in an evangelistic web of treachery that stretched across the country.”

Juliet’s task is to sort out relevant information from a group that includes Dolly (a laundry worker certain she can deduce troop deployments by the arrival and departure of military uniforms); her friend, Betty (trapped in an unhappy marriage); Edith (a dressmaker who patrols the English Channel during daily clifftop walks in Brighton); Trude (a “rather peevish and controlling Norwegian…with contacts all over Britain”); Victor (a machinist with access to secret blueprints); and Walter (a naturalized German who “knew a great deal about tracks and trains and timetables”). Then there’s Dolly’s dog, Dib, who plays a pivotal role in the plot.

In her efforts to “make Britain great again,” Juliet encounters a host of shady characters, among them Rosamund Scaife. While Rosamund’s husband is serving time along with other “Nazi-sympathizing cohorts,” Rosamund has taken over her husband’s interests. Juliet is assigned to infiltrate Scaife’s household in order to incriminate her in traitorous crimes. At the same time, she is enlisted to keep an eye on Toby, in essence becoming a double agent.

This typical spy-novel trope engages Juliet in a series of life-threatening situations which underscore that everyone is a “master of obfuscation.” In fact, the sense of obscurity is a dominating theme of the novel.

When the story returns to 1950, it shifts into high gear. England’s new conflict is with Russia — an old enemy that became a friend and then an enemy again. Here, Juliet’s past pursues her. She seems unable to escape the consequences of a yet-undisclosed horror that occurred a decade before. Anonymous notes surface. New adversaries appear. Juliet is dragged into providing a safe house for asylum seekers.

Transcription stretches over four decades, never losing sight of its overriding theme exemplified by the story of Daedalus and Icarus — the perfect plot. Icarus, “of course had flown too high and fallen. In some ways it was the only plot.” Atkinson keeps well the secret of who here is Daedalus and who is Icarus.

Her narrative is clever and serious yet not without the element of Atkinson’s trademark humor. Juliet, with an “inclination to levity,” often silently comments on her adversaries. At one point, she has an outing with otters that looks as though it’s going to be a scene of seduction. And there is a comic fiasco of farcical proportions that becomes tragic.

At every point, however, it is clear that lying is the foundation of Juliet’s character. She understands that “if you’re going to tell a lie, tell a good one.”

Kate Atkinson is a masterful manipulator of lies. Transcription is a spectacular game of deception, her own perfect plot. It is as twisty and efficient — everything falls into place like the tumblers of a combination lock — as the best of Le Carré.

Robert Allen Papinchak, a former university English professor, has reviewed a range of fiction in newspapers, magazines, journals, and online, including the New York Times Book Review, the Washington Post, the Chicago Tribune, the Los Angeles Review of Books, the Seattle Times, USA Today, People, the Writer, Publishers Weekly, Kirkus Reviews, the National Book Review, the New York Journal of Books, World Literature Today, the Strand Magazine, Mystery Scene Magazine, and others. He has been a judge for Publishers Weekly’s BookLife Creative Writing Contest and the Nelson Algren Literary Prize for the Short Story. His own fiction has been nominated for the Pushcart Prize and received a STORY award. He is the author of Sherwood Anderson: A Study of the Short Fiction.

The Dead: A Novel

Two men from different cultures share a passion for film and the same woman.