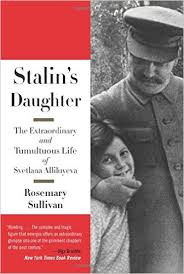 Like Elizabeth Taylor, whose movies she loved, Svetlana Iosifina Alliluyeva was a celebrity of sorts, emotionally needy and much-married, hounded by the press. But in some ways, her early life more closely paralleled that of another famous Elizabeth, the Tudor queen. Like the monarch, Svetlana was the well-educated daughter of an infamously demanding “king,” whose mother died at her father’s hands (Nadya Alliluyeva’s suicide being attributable to spousal abuse).

One cannot read Stalin's Daughter without wondering how it might have profited from comparing its subject to previous and contemporary examples. Alas, despite its considerable length and the access the author enjoyed to her subject’s family and personal papers, the story suffers from debilitating shallowness.

From one highly educated female author (Sullivan is a professor emeritus at the University of Toronto) writing about another, we learn surprisingly little about the subject’s intellectual development. For instance, we hear only incidentally of Svetlana’s linguistic accomplishments (on pg. 25, she is said to have learned to read and write German and Russian by age 6; on pg. 106, we find that she could understand Anglophone press reports; and, at last, on pg. 589, an acquaintance recalls that “she spoke French”).

Detailing Svetlana’s first love affair, Sullivan tells of one movie (“Queen Christina”) with which the young woman closely identified. But after her late nights at the Kremlin theater, watching all sorts of films with her ferocious father and his attendants, did she ever watch movies again? Why did she like Elizabeth Taylor? Did she take her American daughter to see “Star Wars”?

Such relatable details are omitted in favor of lists of events and individuals. Sullivan also periodically gives us names of authors Svetlana read, but applicable quotations from their works do not reach us, and so we know little about how they influenced her. What books (other than The Life of Christ in her father’s library) might have attracted her to the Russian Orthodox Church? Was this conversion evidence of rebellion against official government policy or only part of an infatuation with a married lover — whom Sullivan describes, rather oddly (given his flaunting of fundamental doctrine), as a “committed Christian”? If Svetlana had read the Bible, this would imply she was comfortable with pre-revolutionary Russian script, as more modern editions were not readily available to Soviet audiences.

Furthermore, in writing books herself, Svetlana may have aspired to be a member of the intelligentsia, the literati whom she admired and who have long enjoyed a peculiar place of honor in Russian culture. Yet this is a subject Sullivan never explores.

Was Svetlana really “the most significant defector ever to leave the USSR” as Sullivan claims? Today, she is hardly the most well-known. Even at the time, she wasn’t recognized for her personal accomplishments; her notoriety came from her ancestry.

And if a defector is significant, her loss is at least as notable as her gain. Yet we’re given no account of what Russian public opinion of Svetlana was and is, despite the fact that, since the end of the Cold War, it has been possible to ask. Sullivan doesn’t say whether Svetlana’s passing in 2011 was even mentioned by Russian news outlets.

Svetlana’s first book, Twenty Letters to a Friend, about her childhood, was popular, at least for a while, but as it did not illuminate the machinery of oppression like Solzhenitsyn’s Gulag Archipelago, nor did her artistry enchant the world like Nureyev’s dancing, it soon sank into relative obscurity.

Describing the appearance of Only One Year, Svetlana’s second book, a political treatise which committed the “unpardonable” sin of criticizing Lenin, Sullivan includes a 1969 letter from Yuri Andropov outlining the KGB’s response to it. But where is the classified Russian material about Svetlana’s first defection and the planned response to Twenty Letters? Such Soviet strategy is merely inferred from Western periodicals and individual recollections.

Sullivan relies heavily on such personal reflections, presenting them as unquestionable fact without supporting evidence. For example, she doesn’t examine Svetlana’s claim that priestly brutality shaped her one-time seminarian father’s “penchant for cruelty,” nor does she research to what extent these abuse allegations were documented. Given that memories can be re-conceptualized based on changing opinions of the past, these testimonies (some gathered at many decades’ distance, and some from individuals with agendas) should have been relentlessly cross-referenced.

Sullivan doesn’t use terminology carefully, either. She refers, for example, first to abortion as a “form of contraception” (not until the end of the book does she accurately speak of the procedure as birth control); to the voluble Svetlana as speaking “laconically”; and to the elderly Svetlana, parted from her youngest daughter, as being “desolate,” rather than feeling that way.

She reports that Svetlana’s politically radical maternal grandmother, Olga, “reverted” to Russian Orthodoxy (yet, in Twenty Letters, Svetlana says that Olga, of German heritage, was raised a Protestant and considered herself a non-denominational Christian). Later, touching on Svetlana’s own faith, the author declares that, to Svetlana, “because all religions were the same, the church didn’t matter,” which seems to be a fundamental confusion of the terms “religion” and “denomination.”

Sullivan also uses phrases like “right-wing opposition” (which meant an entirely different thing in a Bolshevik context than among, say, National Socialists) and describes Moscow’s Model School #25 as “relatively democratic” without clarification.

Occasionally, the author’s unfamiliarity with the Russian language becomes an obstacle, too. She mentions that Stalin referred to women using the crude word “baba,” but then offers Svetlana’s sanitized definition of that term (“a peasant woman”), rather than citing its common usage (a crone or hag with bad morals and, worse, halitosis — a grave insult). She quotes Svetlana (through a secondary source) as describing the first Kremlin apartment where the Stalins lived as “homely,” and one wonders if she thought it unattractive, or if her meaning might have been better rendered as “homey” or “home-like.” How many other nuances of meaning did Sullivan overlook because of intermediary translators?

One revealing episode in the book is the story of how Svetlana’s Twenty Letters memoir was sold. It damningly depicts the functioning of the publishing world: At the point where the rights had been lucratively marketed, no one had read the actual manuscript, but everyone had already paid for it — it was bought purely on name, not content.

As to Stalin’s Daughter, there is no explanation as to how Sullivan came to write this biography other than the idea surfaced in conversations with her American editor. Throughout, never do we sense what she dislikes or loves about the character she seeks to resurrect; Svetlana’s emotional vulnerability to “romantic predators” and serial seducers who were more than happy to excite her expectations, but unwilling to satisfy them could have been a powerful unifying theme, yet in the end, Sullivan leaves her readers likewise materially informed but emotionally unfulfilled.

Enhancing her proletarian résumé, Christina Petrides worked the night shift on an assembly line at a tractor factory after finishing her M.A. in Russian history at Georgetown. With Maria Shelyakhovskaya, she translated into English Utverzhdenie v liubvi. Istoria odnoi russkoi sem’i: 1872-1981 (Being Grounded in Love: A History of One Russian Family, 1872-1981), published in 2010 by St. Petersburg, Russia-based ZVEZ DA. Follow her on Twitter at @cepetrides.