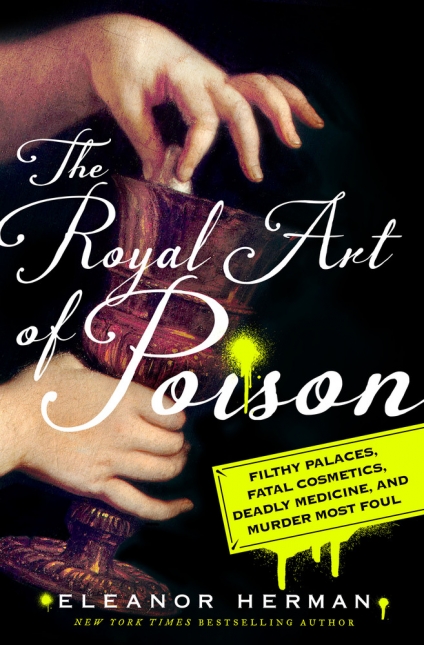 From Joffrey Lannister’s purple-colored demise on HBO’s “Game of Thrones” to the recent poisoning of Russian double agent Sergei Skripal, which sent Russian-British relations into a tailspin, perhaps the ghoulish appeal of poison is making a comeback.

It’s easy to see why it captures the imagination: Put a little drop of something-something in somebody’s champagne, and poof! They die horribly a few hours later, no need for brute strength or bloody cleanup. It may also grab our attention now because, as during the Renaissance, poison is a signifier of turbulent times and childish despots.

Luckily, we have New York Times-bestselling author Eleanor Herman to help us navigate an aspiring widow’s bulging cabinet of nasty concoctions with her new book, The Royal Art of Poison. This fantastic work combines morbid curiosity and royal gossip. In it, readers will not only find out about who could’ve poisoned whom, but also why and with what. Lovers of Tudor history, costume dramas, and high fantasy will rejoice.

Even with all of this glamour, however, this is not a book for the squeamish. Along with poisons, it covers many of the terrifying things royals once put on — and in — their bodies. Trust me, mercury in tinctures and lead in makeup are just the first of many nasty things that float to the top of the cesspool we once called beauty products and medicine.

Not to mention the actual living conditions of the Renaissance royals, which were so filthy that even the peasants in a Monty Python film would’ve found them disgusting. Still, if, like me, you love dirty details, this isn’t a book to pass up.

The Royal Art of Poison is broken into three parts. The first gives us the lay of the noxious land. It includes the silent weapons and their remedies at the disposal of royals and their rivals from the early 15th century to the early 19th. It also includes both the cultural reasons royals might have chosen poison and the precautions people took to protect against it.

I was fascinated by how desperately many of the royals clung to their “unicorn” horns, which they believed was both a cure-all and a kind of poison detector. Of course, the horns actually came from some unfortunate narwhals and were utterly useless against arsenic and everything else.

The book then covers, with punchy soap-opera-like pizazz, the stories of 15 influential figures’ deaths. While this section gets a little sluggish in places, it’s impossible to deny that the author’s exhaustive research is key to the story. The variety of unfortunate characters chronicled ranges from Mozart, and his untimely death, to the rather unstable Johan the III, who was poisoned in Sweden in 1577.

The last section explores the new “renaissance” of poison and those who could be actors in it. Players in the modern art of poison include the late Yasser Arafat, North Korea’s Kim Jong-un, and a small army of people somehow connected to Vladimir Putin.

The Royal Art of Poison also contains a sizable amount of modern science. Since their deaths, many of the royals Herman writes about have been exhumed and analyzed — some more than once — by modern scientists.

Based on the evidence found in their hair follicles, skin, and other remains, we are now able to get a better picture of exactly what killed whom. Often, hidden but natural causes were the culprits, but sometimes it actually was poison. In those cases, the question becomes whether the poisoning was deliberate or just the fault of some incompetent court physician or a deadly new cosmetic.

Herman’s use of language is also entertaining. She understands that no matter how scandalous her subject matter, she is still writing about death and disease, which can be pretty bleak. To counteract this, she employs a keen sense of fun and curiosity that kept me coming back for more.

In the chapter about the demise of Henry VII, Holy Roman Emperor, who couldn’t just shut up and be a puppet, Herman hilariously describes the frustration of the people who were actually in power, stating, “A glittering coronation followed by a raucous party was one thing they could get behind, but they found the bungling intrusions of this northern intruder quite obnoxious.”

Whereas some historians might hide behind their primary-source documents and academic vocabulary, Eleanor Herman is here to show us the naughty bits with tongue-and-cheek humor. The Royal Art of Poison is sure to make the perfect beach read, poolside pleasure, or bedside treat.