Sorry For Your Trouble: Stories 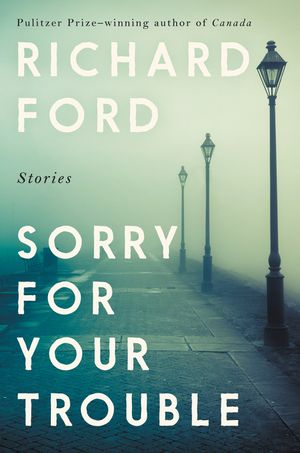 Of the nine short stories in Pulitzer Prize-winner Richard Ford’s invigorating new collection, Sorry For Your Trouble, two are long enough to be novellas. The dominant thread through all of them is an examination of love, divorce, and death. And each has a distinctive geographical setting — from the South and Northeast of America, to Ireland and Paris — which amplifies the atmosphere around the themes in unique ways.

All feature men of a certain age with a load of baggage. The shimmering slivers of life reflect on “how growing up happened”; that “one fine day you’re not who you’d been.”

The opening story, “Nothing to Declare,” is set in New Orleans with the raucous noise (“Boom-pa-pa, boom-pa-pa”) of a St. Patrick’s Day parade in the background. In a bar, among a gathering of lawyers, Sandy McGuinness unexpectedly encounters a long-ago college love, Barbara Nail. They have not seen each other for 35 years; both are married.

“Happy” shifts to Maine, where Bobbi (Happy) Kamper isn’t one. It’s “The Mini Chill” for a gang of six friends in the rarified, tiny circle of publishing, when Happy’s significantly older significant other, Mick Riordan, dies.

In “Displaced,” Henry Harding reflects on what it means to be a 16-year-old in Mississippi. After his father dies, Henry is befriended by Niall MacDermott, a world-traveling 20-year-old who, in the “passion pit” of a drive-in, makes sexual advances that Henry declines. Moving suddenly from the edge of innocence to the vague landscape of experience, Henry believes that growing up means being “unexpectedly freer,” if “only life would turn out to be that simple.”

The longest piece, “The Run of Yourself,” is about a man coping with terrible grief two years after his wife takes her own life. He decides to rent a house in Maine down the road from the one they’d once rented together, hoping that good memories will erase his pain and remorse.

There, the 55-year-old has a chance encounter with a much younger woman he meets in a bar. The story ends like the ping of an incoming text message as his pilgrimage into the past terminates with a “fresh claim upon darkness.”

In a New Yorker interview, Ford says his fiction reflects "how the past impinges on the present and affects it." There is a disarming realism to his work. The four Frank Bascombe books (The Sportswriter; the Pulitzer-winning Independence Day; The Lay of the Land; and Let Me Be Frank With You) trace the irascible but likable New Jersey novelist turned real estate agent from his thirties to his late sixties, bringing him near the dreadful territory of the characters in this collection.

Indelible stories in earlier collections Rock Springs and A Multitude of Sins demonstrate Ford’s keen eye for regional details, as underscored here. Recurrent themes often focus on marginalized characters dealing with personal and professional breakdowns. Throughout all is a dark humor and incisive philosophical spirit that perpetuates an addictive habit for the reader.

Such is the case with the second-longest story in this collection, "Second Language," which concludes Sorry for Your Trouble and touches on Ford’s best moves. Set in Westchester County, New York, it exposes the anguish of the two-year marriage of Jonathan Bell, a Texas oil millionaire, to Charlotte Porter, a second-tier runway model at Eileen Ford.

Charlotte doesn’t want to make a husband happy when she isn’t happy herself. Jonathan’s take? It’s all a “skein, isn’t it?” Getting “married, being not married, getting married again, getting now un-married. All of it.”

The tonal range of the stories here is not wide. It is most often bitter and biting. But the scope of Ford’s sympathetic vision of battered humanity tempers the melancholy nature of a life endured with the compassionate understanding of a life lived.