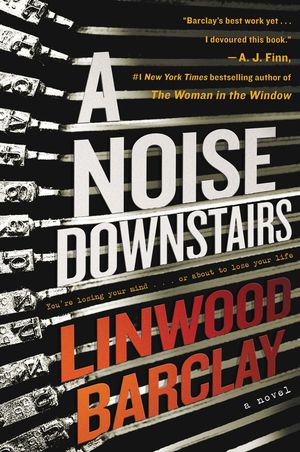 Thrillers are a special breed of book. There are conventions readers insist on, and there are “conventions” readers are often willing to overlook. Linwood Barclay’s A Noise Downstairs has both.

Paul Davis is driving home, minding his own business, when he sees what looks like a friend’s car with a broken taillight. Kenneth Hoffman’s driving is erratic, and Paul wonders if his friend is either drunk or falling asleep. Either way, Paul decides to follow slowly behind long enough to see Kenneth park and throw something heavy into a dumpster.

Now Paul’s really curious. He continues to follow the car until Kenneth pulls over next to a wooded area. Paul noses in behind and is about to ask his friend what’s up when he notices what’s in the back of Kenneth’s station wagon.

That’s about the time Kenneth tries to beat Paul to death with a shovel. Paul survives but has PTSD issues for which he sees a therapist, Anna White, who cares for her patients while dealing with problems of her own, not the least of which is a father who is slowly slipping into dementia.

You can probably guess what’s in the back of Kenneth’s car. Maybe not with precision, but close enough. Much of the challenge in reviewing a well-constructed thriller like A Noise Downstairs is providing the reader some idea of what’s going on without giving away any plot twists, and everything is a potential plot twist. Suffice it to say that Barclay has done his homework. Every twist is well prepared, and the primary red herring works well. (I was sure I had things figured out halfway through. Not even close.)

The story unfolds at a leisurely pace until the natural momentum starts to accelerate events, after which the reveals come one after another, each building on what came before. Paul decides the only way he’ll get past his PTSD is to look closer into what happened that night, even going so far as to visit Kenneth in prison.

His therapist, Anna, gives her tepid approval, only to wonder about Paul’s deeper mental state when he starts to hear the typewriter his wife bought him at a yard sale writing notes all by itself in the middle of the night.

Barclay treads the line between Hitchcock and the supernatural deftly. You know something isn’t right, but are never quite sure what, or why. Is this a haunting story, a mental illness story, or is someone just messing with Paul? He’s a character one can empathize with, and Barclay’s sketch of him is such that all three options are possible, depending on your natural inclinations and where you are in the book.

The tying off of all the threads at the end is well done, yet not so neat as to seem contrived. Barclay is expert at keeping his chess pieces in motion throughout so readers can accept the premise of an action with no extraordinary suspensions of disbelief. Thriller fans will find everything they look for and then some.

Among the premises that must be accepted are some genre “conventions” mentioned above — that is, plot points which give rise to unlikely scenarios. For instance, half the characters in A Noise Downstairs are complete sociopaths. Citing examples would reveal too much, but there are some cold, dark people in this book who spent their entire lives waiting for the opportunity to give their dark sides free rein. In other words, not a light touch.

Another thriller convention some may find jarring: Confronted with a choice, characters invariably choose the course of most resistance, thus advancing the plot regardless of how little sense the decision makes.

For instance, Anna sees something suspicious and considers going to the police. Instead, she decides to visit the person who aroused her suspicions to see if she can trip him up. Much like Paul, who notices Kenneth’s son driving an ice-cream truck and can’t leave the young man alone. The result is the literary equivalent of the young girl in a see-through nightie who heads to the basement with a candle to see what’s making that creepy noise. “Don’t go down there!” we yell at the movie screen.

Those may be quibbles or they may be deal-breakers; decide for yourself. The end result is a story that picks up speed as it careens toward an ending that Barclay nails. Summer is here. If you’re looking for a beach read that will pass the time in an entertaining manner, this may be just the book for you.

Racial tensions erupt in this winning, post-Civil War story based on the author's real-life kin.