A thrilling fictionalized tale about a real-life Black Union soldier. 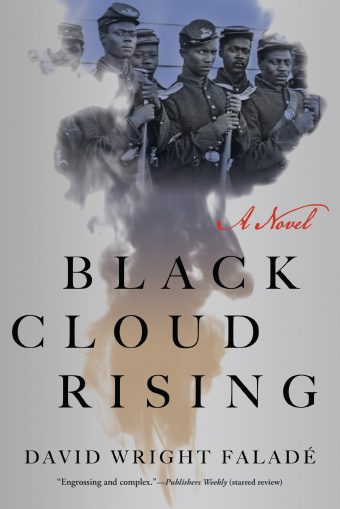 Our country’s racial history, often portrayed as black and white, has never been, well, black and white. That’s as true now as it was in the decades before, during, and after the Civil War. Its complexities are fully on display in the riveting new Black Cloud Rising.

Author David Wright Faladé skillfully weaves real people and events into a compelling fictional narrative of life in the African Brigade, composed largely of “Sand Bankers,” mostly formerly enslaved men from the Outer Banks of North Carolina. Their mission in late 1863: to flush out Confederate “bushwackers,” irregulars who continue to wage a guerilla war in the Union-occupied territory. The Sand Bankers are led by white officers from Massachusetts, Gen. Edward A. Wild and Capt. Alonzo G. Draper.

The book’s protagonist-narrator is Sgt. Richard Etheridge, son of the white John B. Etheridge and one of his slaves, Ma’am Rachiell. Richard is treated by his master/father almost — but never quite — like a son and is somewhat privileged among the other slaves. He is shown some deference but never equal status. As his enslaved mother reminds him, “Making a baby don’t make a father.”

Richard’s white half-sister Sarah teaches him to read and write, in violation of North Carolina law, and corresponds with him after he has left the manor to fight for the Union and freedom. But, again, his enslaved mother provides a reality check: In letting Sarah school Richard, his owner/father had merely “allowed his daughter a pet to play with of a Sunday afternoon.” Tellingly, the white Etheridges call the young man Dick, with a presumed familiarity, while he is Richard among his own people.

President Lincoln’s Emancipation Proclamation, effective Jan. 1, 1863, had paved the way for the formation of the U.S. Colored Troops, mustered from the ranks of free and formerly enslaved Black men. The African Brigade eventually becomes part of its 36th Regiment, where Etheridge rises to the highest non-commissioned rank of regimental commissary sergeant, comparable to master sergeant.

Raised in the Texas Panhandle, the author, an English professor at the University of Illinois at Urbana-Champaign, added Faladé to his name in honor of his late biological father from the West African country of Benin. As David Wright, he co-wrote an earlier nonfiction book about Richard Etheridge, Fire on the Beach. In his character-driven novel, he mixes fact and fiction to gripping effect.

Wright Faladé has done his research. His sense of place — the barrier islands and swampy areas of northeastern North Carolina — is picture perfect, and the characters come alive on every page. Such is the authenticity that the reader may be forgiven for having to look up unfamiliar words like pocosin (a wetland bog) or references to things like the Lieber Code (which governs the conduct of U.S. soldiers in war).

As boys, Richard and his white cousin Patrick (“Paddy”) play together as Sand Bankers on Roanoke Island and work culling oysters for Richard’s master/father. When war comes and Union forces occupy the region, the white Etheridges — as a measure of self-preservation — sign loyalty oaths to the North. Nevertheless, Paddy soon leaves to fight alongside the Confederate bushwackers. Richard joins the African Brigade.

The two eventually encounter each other during one of the African Brigade’s missions to flush out Rebels. Rather than execute Paddy on the spot, Richard directs him to shed his Southern uniform and return home.

The cousins’ relationship underscores the ambiguity of their respective status. At one point, for instance, Richard is convinced that Paddy has raped his true love, Fanny, after Paddy boasts that a “n*****-gal ain’t keeping nothing from nobody.”

Paddy replies, “It’s different with you, we come up together. You’re like family.”

“Like family?” Richard says. “Patrick you and I are family.”

Later, as soldier Richard is letting him go, Paddy says, “When we meet again, Dick, we will be equals, you and me…Just think on that!”

“We always were, Paddy,” Richard responds.

The brigade is less lenient with other captured enemies. Early on, while freeing a man’s slaves, Gen. Wild encourages one of them, “an old mammy, head wrapped in a red rag,” to whip her former owner nearly to death. On another occasion, they hang a youth they deem to be a guerilla fighter and not, as he claims, “a simple company musician…on leave from his regiment.”

But discipline is also meted out to a member of the African Brigade when Fields, one of Richard’s childhood friends, takes an unapproved detour to try to free enslaved relatives. He is demoted, and Richard is ordered by his white officers to strip the corporal’s stripes from his uniform in front of his own soldiers, a humiliation both must bear.

In the first months, tedium marks the African Brigade’s time in the field as they march across conquered territory, freeing the enslaved along the way. Two-thirds of the way through the book, however, daily monotony gives way to action, with flying bullets and casualties aplenty.

More than the Rebels, Richard’s nemesis is another former Etheridge slave, Revere, a fellow sergeant in the African Brigade who leads an unruly band of “Maroons,” descended from fugitive slaves from the Caribbean who inhabit the remote Great Dismal Swamp that straddles the North Carolina-Virginia border. Their mutual antagonism is threaded throughout the narrative, and their dramatic final confrontation brings Richard face to face with the truth about himself and his place as a Black man in white America.

Richard recalls the confrontation decades later. It’s Christmas 1899, and he is the first Black station keeper of the Pea Island Life-Saving Station on the Outer Banks, where he leads an all-Black crew of surfmen in the precursor to the U.S. Coast Guard. The fictional Richard muses:

“How do you forget the grievances that should not, by any right, ever be forgot? You don’t. But with time, you make do. In the Sand Banks, blood is blood, even if it is never fully family, so you come, day in and day out, to remember your justified resentments. By and by, they find their way into dark places you rarely allow yourself to visit.”

More than a century later, in 2012, a real-life Coast Guard cutter was launched bearing his name, and in 2018, the Captain Richard Etheridge Bridge was dedicated over a Hatteras Island inlet where the life-saving station once stood. Now, with Black Cloud Rising, David Wright Faladé has brought a fictionalized version of Richard Etheridge’s story to a larger audience. It’s a tale worth telling — and one very well told.