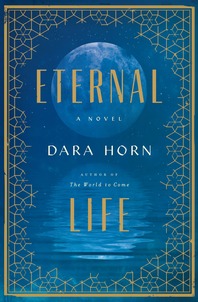 What if an author of literary repute wrote a book about living forever? And what if that book contained not a single vampire or zombie, but rather a woman — everywoman, if you like — who impulsively enters a bargain with God to exchange her mortality for the life of her ailing child?

Such is the premise of Eternal Life, a tour-de-force examination of the role death plays in a meaningful life; of love — both maternal and romantic — that endures beyond time; and of the relevance of religion in a changing universe.

These are weighty topics, indeed, but author Dara Horn navigates them with a light touch, creating a tale that is both page turner and philosophical treatise on humanity’s timeless quest for meaning.

The story begins in present day New York with Rachel, an elderly woman who is simultaneously relishing her time with her loving family and plotting her exit. Rachel has been alive for several thousand years, all because of a promise she made centuries ago in Old Jerusalem to forgo physical death for all eternity to save her child.

Let’s just say, she didn’t think it through. For one thing, Rachel thought her pact with God was a metaphorical bargain rather than the literal promise it turned out to be. And, of course, as she might have foreseen if she hadn’t been a young, frightened mother in a patriarchal world where women’s intellectual muscles had few opportunities to flex, her son eventually died anyway, as everyone must. A blessing she has irrevocably denied herself.

Eons pass, Jerusalem is sacked. Rachel, too, embarks on her own diaspora as every time she exits one life — which she eventually begins to view as “versions” of life — she awakens newly young in another location. She marries hundreds of times, gives birth to generations of children, all of whom she loves unreservedly, and struggles to balance the fulfillment these families give her against the ennui of repeated experiences.

“And the children repeated, which haunted her most of all. You could have sworn you had had this same wild son or this same hotheaded daughter before, maybe more than once, wearing different clothes. But you could never tell them.”

Does everything matter, or is everything “an outrageous waste of time,” she wonders, reflecting on the lessons learned and unlearned over countless lifetimes. In this latest version, one of her happiest, Rachel is loath to leave because her offspring still need her, even as she longs to become superfluous in their lives.

“Which in fact was the entire purpose of life, to live in such a way that one made oneself superfluous. And therein lay the root of the problem. There was no point in any of it, none at all, unless one had plans to leave.”

Rachel is not completely alone in her odyssey, however, thanks to the endless devotion of her first child’s father, who loyally or creepily, depending on your point of view, stalks her through time, having made the same bargain with God in solidarity with the one person he feels fated to be with.

Although Rachel sees herself as an endless caretaker, the book deftly examines the shifting roles of women over the centuries, but without getting preachy. She notes with amusement, for example, how a current grandson participates in childcare as a matter of course, something that would have been unthinkable in her first life, when the simple act of cleaning ashes from the grate — performed only once by her first son — was seen as a gesture of astonishing generosity.

Horn also pokes fun at the vagaries of the cyber age when a ne’er-do-well son stumbles on an algorithm that would make it more difficult for people’s identities to just disappear, and a beloved granddaughter devotes herself — with a grant from Google — to banishing death by manipulating human cells. Understandably, Rachel regards both of these possibilities with horror.

But while there is plenty of sorrow in this sometimes-harrowing novel, it is also a slyly funny and ultimately hopeful take on the human condition and our ability as a species to find joy, even amid the ashes.