Six Amendments: How and Why We Should Change the Constitution

A former Supreme Court Justice offers his personal adjustments to the Constitution. 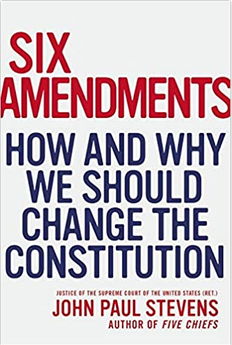 Amending a country’s constitution is not an easy thing to do. Designedly so. In 225 years, ours has been amended on only 18 occasions. (The first ten amendments, the Bill of Rights, were ratified at the same time in 1791.)

Now, under one cover, here come six more. The temerity of it! What outspoken revolutionary upstart would propose reversing a host of recent Supreme Court decisions in five areas and in a sixth, impatiently shoo the Court along the trend of its judgments?

Why, it’s retired Associate Justice John Paul Stevens, a moderate Republican when President Gerald Ford nominated him for the high court in 1978. This gentle justice insists that the court changed far more than he did over his 35-year tenure.

He concludes: “… rules crafted by a slim majority of the members of the Supreme Court have had such a profound and unfortunate impact on our basic law that resort to the process of amendment is warranted.” So, what rulings would Justice Stevens change and why?

He would disallow gerrymandering. Political districts honor natural boundaries, reflect past voting patterns, protect minority representation … but also, as he shows in diagrams,  are often drawn in “bizarre shapes” serving no purpose except to enhance one party’s political power. The result is that the votes that count are not cast in general elections, but in partisan primaries. This “leads candidates, whether liberal or conservative, to adopt more extreme positions.” Winners who face less vulnerability in a district’s general election have less incentive once in office to take political risks and engage in compromises. What results is debilitating polarization and, to cite just one example, government shutdowns.

He would authorize Congress to regulate spending on campaigns. By equating political money with free speech as a constitutional right, the Court has been striking down congressional limits on spending by candidates and their supporters. This amendment would return to Congress the power to deal effectively with campaign finance.

Convinced that capital punishment has no value as a deterrent, he would “expedite the demise of the death penalty” by labelling it cruel and unusual punishment. While many death convictions have ultimately been reversed for legal flaws, Justice Stevens will not tolerate even one mistake.

He would restrict the Second Amendment right to keep and bear arms to members of state militias, leaving the regulation of an individual’s gun rights to state and Federal legislatures. “Constitutional provisions that curtail the legislative power in this area unquestionably do more harm than good.”

The justice would require all state public officials to abide by acts of Congress and constitutional decisions of the U.S. Supreme Court. The Constitution’s Supremacy Clause now requires that only of state judges. The result, he argues, has been application of states rights that defy lawful Federal legislation on the premise that cooperation by state officials cannot be commandeered.

He would also strip sovereign immunity from state officials who don’t follow federal law, as well as from state-run enterprises such as hospitals and universities that are functionally the same as private businesses.

During his Court service Justice Stevens was in the dissent on each of these issues. Here, he accompanies his proposals with essays setting forth the evolution of the precedents and his reasoning for change. The logic is succinct and direct and it will satisfy believers. However, winning converts will be another matter, for any of these issues could start a fight in bars across the country. None, in my view, is likely to survive the amending processes prescribed by the Constitution. If there is a gap in this fine book, it is that the author describes the process but does not confront its practical difficulties

The process is this: amendments can be proposed either by two-thirds of both houses of Congress or by two-thirds of the state legislatures in a convention called for the purpose. Once proposed, an amendment must be ratified by either three-fourths of the state legislatures or conventions in three-fourths of the states. (The latter has never succeeded.) Since the Constitution was ratified in 1789, more than eleven thousand amendments have died or been shunted aside.

With 27 of today’s state legislatures controlled by Republicans, 17 by Democrats and six split, it is difficult to see success for any of Justice Stevens’ proposals, even the ones that are not strictly partisan.

State and Federal legislators being largely in control of the amendment process, their support – or least, their lack of opposition – is essential. As a practical matter, how likely is it that elected officials of either major party will endorse proposals that will neuter their ability to gerrymander, or forbid them to duck selected Federal requirements, or eradicate sovereign immunity?

As for the other amendments, polls show 60 percent of the public favors the death penalty. While support has been eroding over time, abolishing capital punishment has yet to enjoy broad-based activist support. On campaign spending, even if Congress were empowered to act, would these elected officials restrict their ability to secure their own incumbencies? On firearms, it seems unlikely that members of a Congress who shot down gun control legislation in the months following the Newtown school massacre would withdraw a Second Amendment right to self-defense in one’s home.

So, given the odds, is this game worth the candle? Beyond a doubt! The book has valuable insights for all sides. Its proposals are well-crafted. Its arguments are a model of how to conduct debates on law and public policy. Herein is the voice of respectful and principled disagreement on the merits, not slick and tested talking points, no gotchas or sound bites hurled at the other side.

Most important, these are policy choices. Constitutional amendments are not the only way to make them. After all, “a slim majority” of the court, often just a single vote, set out the principles Justice Stevens would change. These essays are an alternative form of judicial dissent, a summons to the future, a call to rethink matters when different circumstances allow.

Tom Phillips is a retired attorney in Chicago, Illinois. In his day, he practiced law and government relations, sometimes together.